What to Cook for Valentine's Day 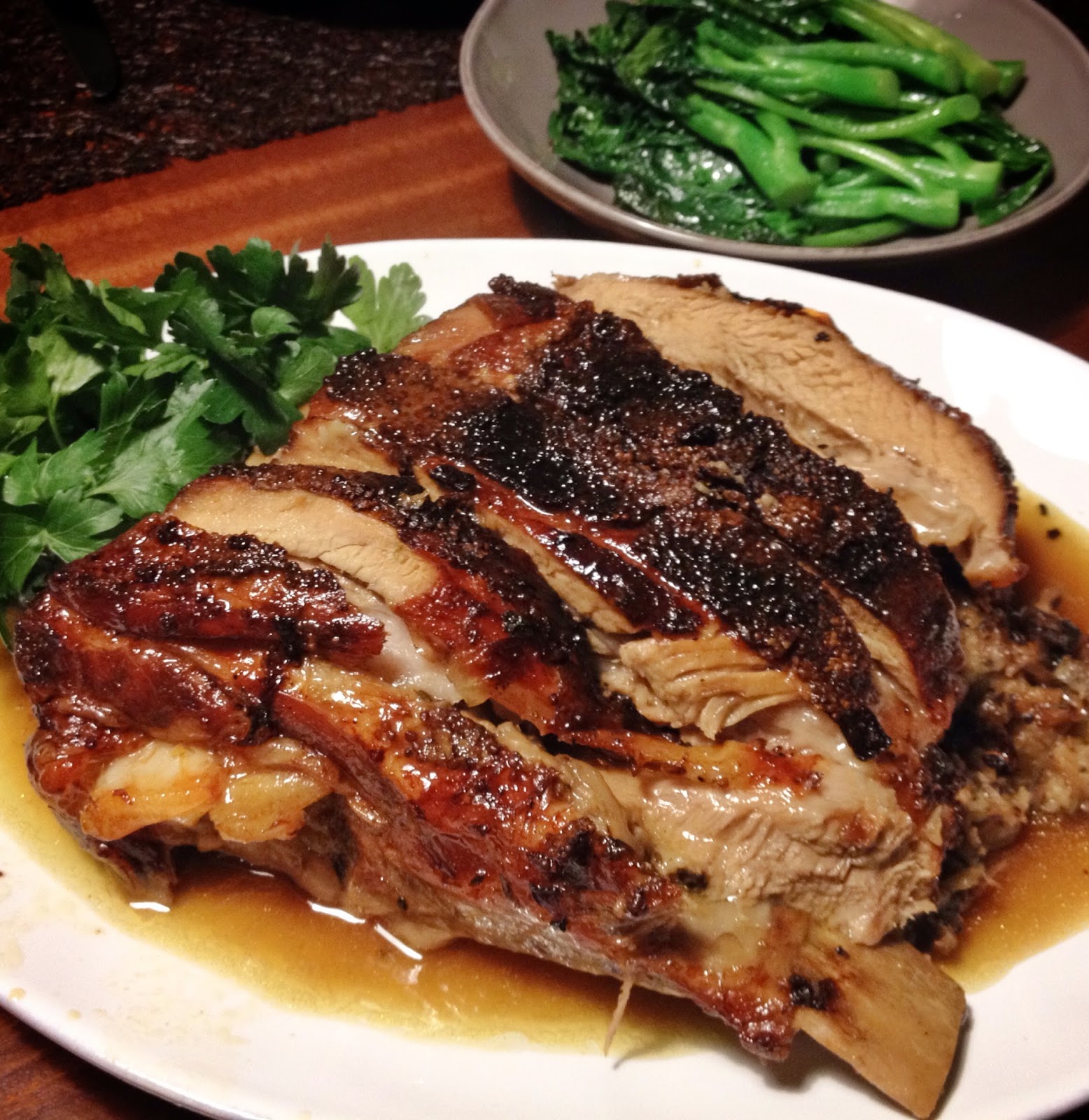 In the last few months of my marriage, when things were beyond awful and we were barely holding things together and I was mad with grief and other things, an old boyfriend of mine from when I was very young, someone I hadn't laid eyes on in over twenty years, started emailing me. And, like a woman clutching for a life-raft, I threw myself into this epistolary romance full force, thinking myself, briefly, in love. It was a fantasy, of course, and one that could only be sustained because we never met: we were still, to each other, those beautiful children full of naïveté and hope. He gave me things that I was desperately craving: attention, most of all, but also a window to who I had been once before -- before those many years of a marriage that never quite fit, before motherhood, before losing myself (through no one's fault but my own).

While my ex and I certainly spent a lot of time together in the kitchen, we didn't think of food in the same way: for him, it was about the finished product, the meal to be savored at the end, the opportunity to match a dish with wine. He was an epicurean, I suppose. For me, being in the kitchen was the goal in itself, and the meal was simply the consequence of the pleasures of cooking, of a pleasure of the hands and the brain. It was a subtle difference, but a difference nonetheless.

When my old boyfriend started writing to me, and we were catching up on everything we'd missed after decades of not keeping in touch, I found out he was a restaurateur. I was surprised: I'd never known him to be interested in cooking, although perhaps that had more to do with the tumultuousness and secrecy of our relationship back then, more than a reflection of his actual interests. He wrote to me now that he loved kitchens, everything about them -- cooking in them, even cleaning them, making bread all day, letting a broth simmer. I understood exactly what he meant.

We would fantasize a lot about meeting, knowing that it would never happen -- we were both married, and were both working hard to convince ourselves that a little letter writing wasn't going to interfere with our love for our respective spouses. The pleasure of this correspondence was precisely this opportunity to fantasize, to imagine our ways to happiness, not even necessarily with each other. For me, it meant thinking, for the first time in many years, about living a life without my husband next to me. It was a sadly crucial step for me -- sadly, because it hurt people, me not least of all, but still crucial.

In one of these exchanges, when we were talking about what it would be like if we ever met, I asked what he would cook for me. I hated when my husband cooked for me, only because he was so stressed out about everything turning out perfectly that it was never fun. (That could well have been my fault -- did I hover? Did I criticize, or pass judgement, with my raised eyebrows or facial expressions? I could have. It's certainly possible. I don't want to suggest that this was his fault; it just was.) But the idea of my old boyfriend cooking for me -- that was a seductive idea. It seemed like such a sexy prospect.

I don't remember all the details of his reply, but I remember champagne and oysters, and maybe a celery and celeriac soup, and I remember some sort of chicken (a perfectly roasted chicken, perhaps? But no, I think he nixed that idea because it would require too much attention), and steamed bok choy which I thought was an odd choice.

I was disappointed that he didn't ask me in return -- what would I cook for him? -- because at the time I probably had ideas. But when I sat down to write this post today, I realized that I don't anymore -- don't have ideas, that is, for a romantic dinner with someone I adore. The mere possibility of it seems so remote that I've stopped thinking in those terms, and instead imagine other meals: with my daughter, with friends, even with crowds of virtual acquaintances I know from Facebook. I knew I would never cook for that old boyfriend, but I would have been happy to imagine the possibility, back then. Now I don't even bother with the imagining.

In case you're curious, the correspondence ended at more or less exactly the same time as my marriage did. It became too real at that point -- there was nothing standing in the way (for me, at least), and that was too much for the fantasy to bear. I kept the letters for a while, and then, after some years, read them again -- hundreds of them, written over the course of a few months, several times a day -- and wept for the woman who wrote them: for her silliness and pain and banality and blindness. And I realized I didn't know her anymore. And I deleted them, dried my eyes, and went off to cook dinner.


Braised Brest of Veal with Onion and Mushroom Stuffing
Serves 6

This is what I made to celebrate Valentine's Day with my daughter. I had picked up a breast of veal at Fairway a while back, thrilled by the prospect of that cut, so old-fashioned and French-seeming, one that is hard to come by in this neck of the woods. It takes well to a slow braise, and produces an unctuous sauce. There's not a huge amount of meat on the cut, so stuffing it by cutting a pocket near the bones and filling with an herbal, aromatic mix is a good idea. Serve this with roasted baby potatoes and sautéed greens.

1. Preheat oven to 450 degrees. Using a sharp paring knife or a boning knife, cut a pocket in the veal breast. You are going to cut from the thin side of the breast toward the thick meaty part, right along the rib bones, keeping your knife angled a bit towards the bone and cutting with the sharp tip. Leave a 1" margin of meat around the pocket (i.e. don't cut right through). Set aside on a plate.

2.  In a skillet, heat 1 TB olive oil and pancetta over medium high heat, and cook pancetta until most of its fat renders. Add the onions and a pinch of kosher salt and sauté until golden brown. Add mushrooms and herbs, along with a pinch of salt and a generous amount of freshly-ground pepper. Sauté for about 5 minutes or until the mushrooms are reduced soft and wilted. Transfer to a bowl, mix in breadcrumbs, and check for seasoning. 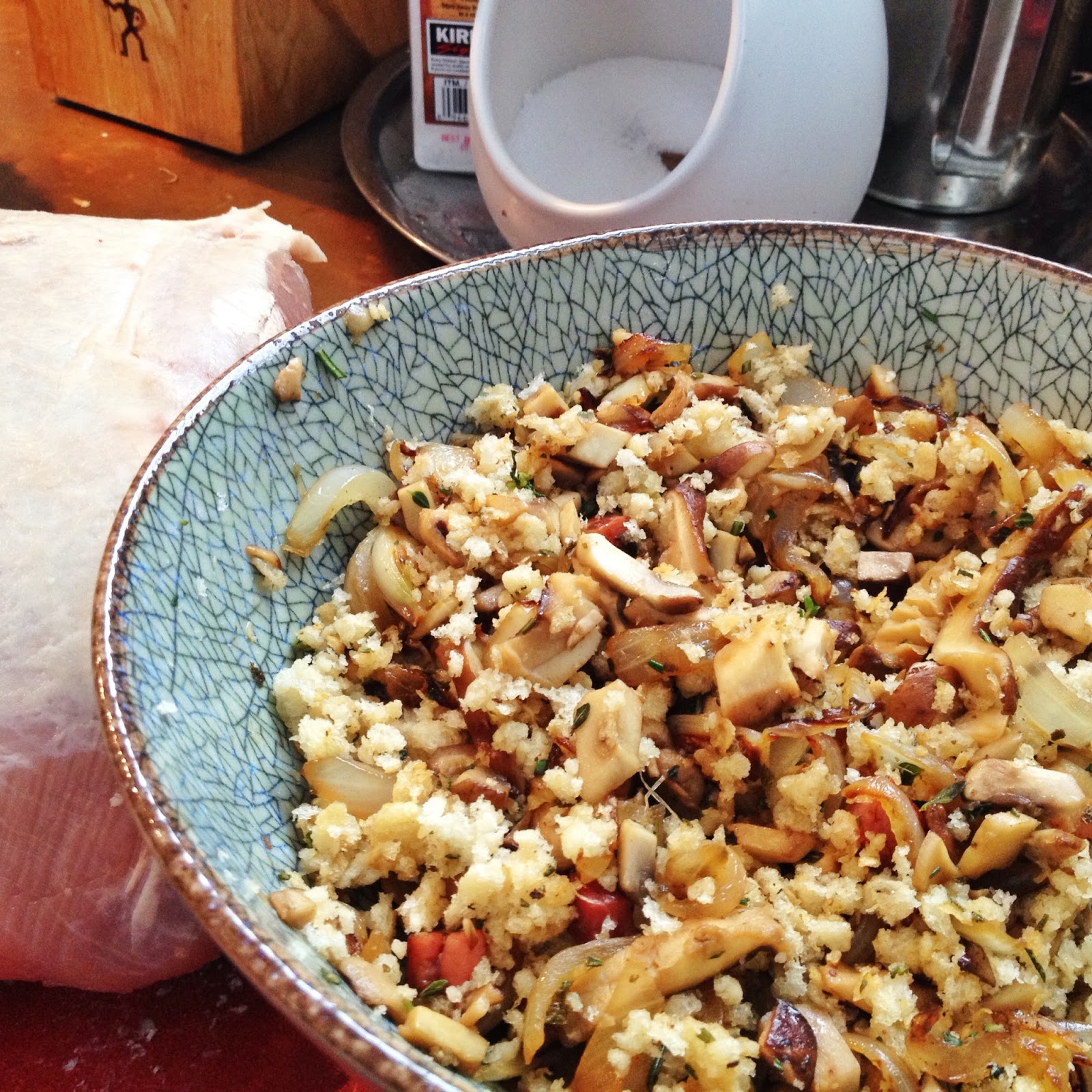 3. Stuff the veal breast with the stuffing, pushing deep into the pocket you've cut using a spoon or your hands; "massage" the veal from the outside to distribute the stuffing and make sure you haven't missed a spot. Tie in three or for places with kitchen string. Season the outside of the roast generously with kosher salt and pepper.

4. In a braising pan or roasting pan, heat 1 TB olive oil over medium high heat. Add the onion, carrots, celery, and garlic and sauté with a healthy pinch of salt until onions just start to soften. Push the vegetables to the outside of the pan and place the veal breast in the center, meaty side up. Place uncovered in oven for 25 minutes, so that the veal breast can sear.

5. Take the pan out of the oven, and adjust the oven temperature to 350 degrees. Place the pan on a burner over medium-high heat. Add the white wine and enough chicken broth to come about half way up the side of the meat, along with the bouquet garni. When the liquid comes to a boil, cover the pan -- either with a lid or a couple of layers of heavy duty foil. Return to the oven and allow to braise slowly for 3.5 hrs. 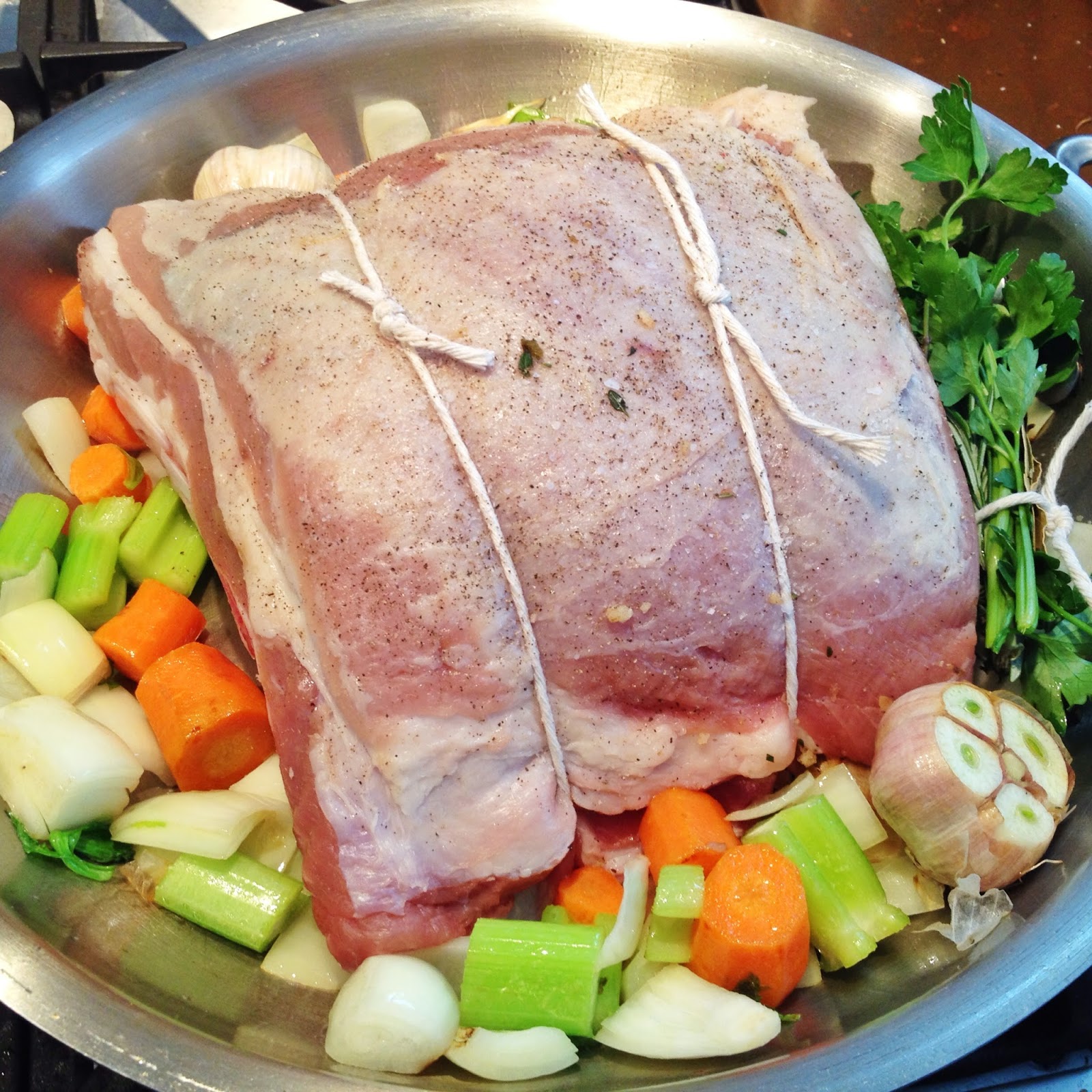 6. Remove foil from pan, slather the top of the veal breast with the mustard, and allow to roast for another 30 minutes.

7. When done, remove the pan from the oven. Take the veal breast out of the sauce and place it on a cutting board, loosely covered with foil. Strain the liquid left in the pan into a large measuring cup, reserving the roasted garlic pieces. Skim as much fat as you can off the pan juices, and transfer to a saucepan; bring to a simmer over medium heat. Squeeze the garlic flesh out of its skins and add to the sauce (discard the skins). Taste for salt; add a squeeze of lemon juice to brighten the flavor if necessary.

8. Slice the veal breast and arrange on a platter with the sauce strained over. Note: this meat is fall-off-the-bone tender, so it will not slice cleanly. If you'd like very proper slices, you can refrigerate the stuffed veal overnight on a platter (refrigerate the sauce separately). The next day, slice it, lay the pieces in a baking dish, baste with the sauce, and reheat in a 400 degree oven till warmed through.

Claire said…
This is a beautiful post. It amazes me how similar some of our experiences were miles and miles and years apart. Thank you.
February 14, 2015 at 7:41 PM

Unknown said…
I agree and am so touched in reading it. The amount of soul (self-reflection, honesty, and growth) in this post is enough to make a stock pot of the most delicious (to-the)bone broth. Thank you.
February 14, 2015 at 7:58 PM