When I was eighteen, I developed a crush on a much older man (twenty-three!) who was an avid mountain climber. Of course, in the true manner of the eldest sibling, I assumed that if I demonstrated my interest and aptitude in his chosen hobby, I would get his attention and he would fall madly in love with me and we would live happily ever after, climbing mountains with our 2.2 children and dog and picket fence strapped to our backs. This strategy was short-lived, lasting until, hiking with my parents one day, I decided to scale some rocks next to a rushing stream, slipped, and came *that close* to being crushed against some pointy boulders sticking out of the water below me. I mean, the guy was cute, but he wasn't worth a cracked skull.


Three years later, not having learned any lessons from this particular crush, I fell for another boy who was also into the great outdoors. I had just graduated from university and was living in my hometown which was about 45 minutes from the Rocky Mountains. A few times a week I'd drive out to Waterton National Park where my friend Lisa was working for the summer, and we'd go hiking along with her boyfriend, Brad, who used to maintain the trails, mostly by kicking aside rocks and debris with his steel-toed boots along the way. Sometimes I'd go alone, parking my car at the end of the trailhead and hitching a ride to the starting point with German tourists in panel vans determined to see grizzly bears, which is apparently why they all came to Banff and Waterton at all. On one of these excursions, this one to Crandall Lake, the couple that I rode with were very excited because there had been a bear sighting on the trail earlier in the day. I was nervous because I was hiking alone that day, and when an American guy about my age caught up with me and suggested we stick together (bears generally stay away when they hear people talking and making noise), I agreed, despite his demeanor -- he looked like a jock frat boy, he looked me up and down completely unapologetically, and had that sort of "guy guy" swagger that turns me right off. None of this mattered, of course, because I could take the guy more easily than I could take the bear. My nervousness about getting mauled had given me an extra adrenalin boost, and I dashed up the mountain at an impressive clip; after struggling to keep up for about two hours, the jock swallowed his pride and asked me to slow down. When we got to the peak, the poor guy was exhausted and claimed he needed to take some pictures (even though there was no evidence he had a camera with him) and that I should go on without him. I did what should have been a six or seven hour trek in four. Amazing what worrying you'll be eaten by a grizzly will do for your athletic performance -- better than steroids or HGH.

Lisa and Brad told me about one particular hike that they had gone on, to a place called Lineham Basin, tucked between three of the biggest mountains in Waterton and containing three of the purest lakes in the area, practically untouched because you needed a permit to go in; they only gave out two permits at a time, so only eight people total could ever occupy this isolated area at one time. My friend Pam came down from Edmonton, and the four of us assembled at Lisa's cabin to prep for the trip. Lisa's brother, who spent a lot of time in the mountains, too, thought we were crazy for trying this -- 9 km straight up the side of a mountain, hauling all the supplies (including food and water) that we'd need for a four-day stay -- when Pam and I had basically no experience on these kinds of adventures. He laughed at the hobo packs we prepared, consisting of ridiculous amounts of ground beef and vegetables and weighing a ton and a half. Of course, his (legitimate) claims to expertise made me even more determined to go and prove him wrong.

The hike up was tough, but gorgeous (we all definitely regretted our food choices except for Pam, who was a vegetarian); we started in thick forest and ended up in a meadow filled with wildflowers, where we rested a bit before attempting the toughest part of the trail up the side of the mountain. We stopped at a few streams along the way to cool off. When we reached the top, we took a few moments to appreciate the amazing view, and then Lisa herded us back on the trail, worried that it was going to get dark before we had time to set up our camp. The descent into the basin was a shale slope. As soon as we started going down, Pam started to panic. "You said you weren't afraid of heights!" I called out. "I'm not! I'm just afraid of going down!" This was less funny at the time. Brad and I went ahead to set up camp, and Lisa led Pam down the mountain. Slowly. Very slowly.

The days in the basin were glorious. It was the cleanest air I've ever breathed. The wildlife was totally unafraid -- we saw mountain goats, mountain sheep (a pretty rare event), deer, a moose, and other animals; Brad claimed he glimpsed a bear, but none of us believed him. Pam and I went exploring around the basin, swimming in the crystal clear lakes while Lisa rested, drained from beaver fever (giardiasis) , in the tent most of the time. Brad, who constantly tormented me with jokes about my feminist commitments, bragged that he would catch some fish for dinner; not having brought extra fishing rods, Pam, Lisa, and I were flummoxed as to how to one-up him. Well, it turns out that the fish in the Lineham lakes are pretty lazy critters, and we discovered that we could catch them by scooping them up in our t-shirts. We couldn't figure out how to kill them without knives, though, so we ended up bashing in their heads on the rocks (gross, but at least it was quick). Brad came back empty-handed, and was both overjoyed and chagrined to discover our haul of four or five good-sized trout. He cleaned them and tossed them in flour and spices and cooked them up over the fire; maybe the best meal I've ever eaten.

On day three, concerned about how we were going to get a sick Lisa up the mountain and a phobic Pam down the other side, Brad and I went to explore the other route out of the basin; maybe that would be an easier trail. We walked over the the opposite side and scoped out the situation; it certainly looked like a more gentle track, save for the one cliff face that you had to scale that tucked behind the famous Lineham Falls, to get to the trail itself. "No problem!" we said, and started making our way across despite the fact that we had no ropes or spikes or whatever the hell else one might need to cross a cliff face that was a sheer drop of at least 100 feet below us, with toeholds few and far between. At the first slight slip, we both looked down the cliff face, realized how incredibly insane we were being, and reversed course, getting back to solid footing with our hearts beating out of our chests and a promise not to ever tell our parents, or really anyone, how stupid we were. (I am making the executive decision here that the statute of limitations on this promise has run out, twenty years after the fact.)

We got out of the basin the same way we came in, with Pam gritting her teeth but being a hell of a sport, and Lisa practically piggybacking Brad the whole way up the mountain face. When we got down to the car, we were euphoric, punch-drunk, maniacally happy. We drove dangerously fast to Lisa's cabin (do you see a theme here?), and then Pam and I drove back to my hometown; we didn't even bother to take showers until we got home. My parents were shocked when they laid eyes on us, looking all camped-out and gross, but man -- best shower of my life, and when I got out and dried myself off, I looked totally different, as if I were a whole new person. 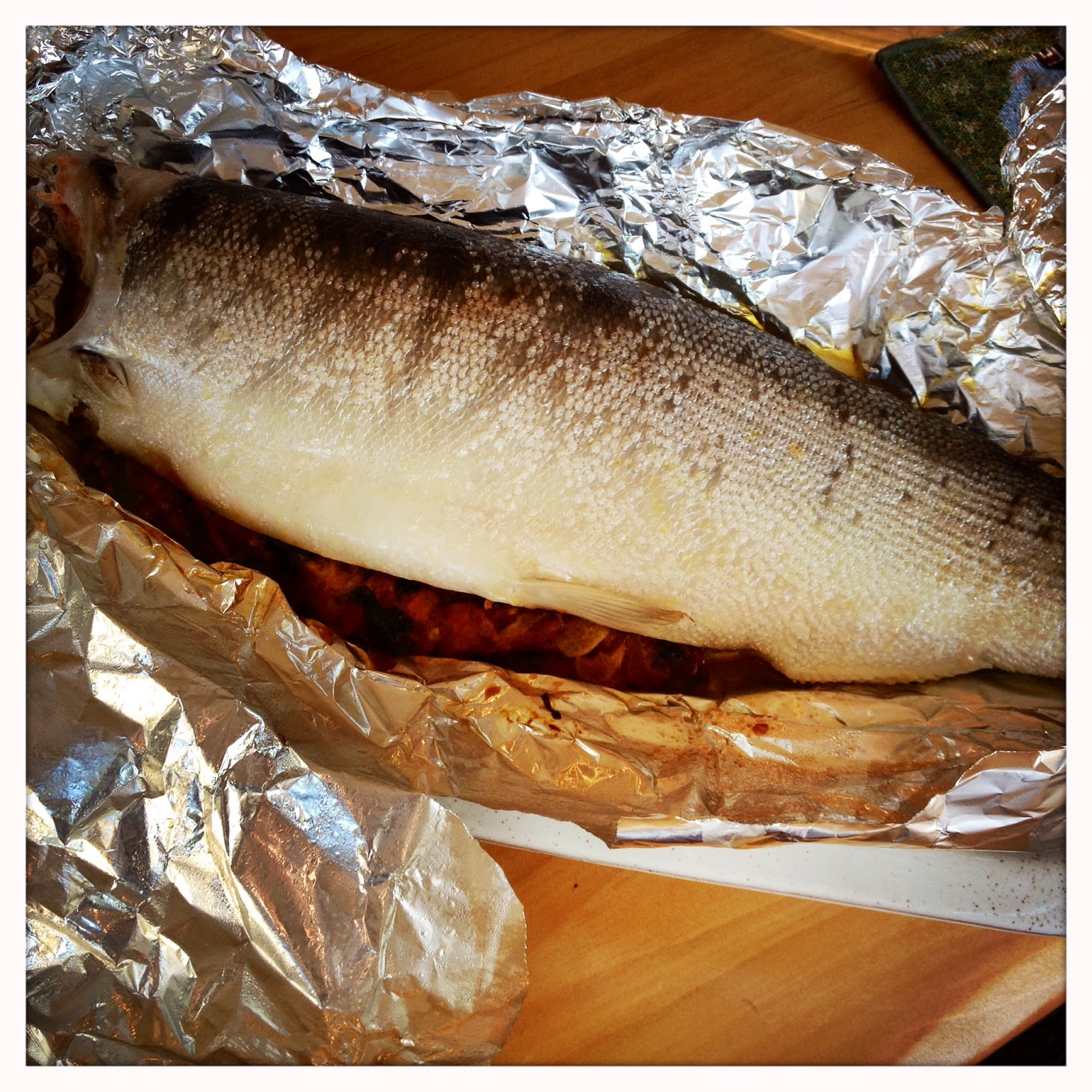 1. Make the masala: in a skillet, heat 2 TB canola oil over medium high heat. Add 2 large yellow onions, sliced and sauté over medium heat until golden brown. Add 3 cloves of garlic, peeled and sliced, 2 sliced green chilies (or to taste), and about 1 tsp grated ginger root and saute for one minute. Add 1.5 TB bafat powder* and 1.5 tsp salt, and sauté until fragrant; alternatively, add 1 TB coriander powder, 2 tsp cumin powder, 1/2 tsp turmeric, 1/4 tsp cayenne powder, and 2 tsp paprika, along with the 1.5 tsp salt. Add 2 c canned diced tomatoes with their juice, and cook on a lively simmer for about 20 minutes until the mixture is thick and well-cooked; the onions should be fully softened and almost disappear into the tomatoes, and everything should be tasty and pasty. Add 2 tsp brown sugar and 2 tsp wine vinegar along with 1/4 c water and cook uncovered for another 5 minutes or so. Check for a balance of flavors -- you should taste sweet and tart and spice and salt. Take off heat and mix in a big handful of chopped cilantro (at least 1/4 c, loosely packed, or more). Allow to cool.

2. Wash and pat dry two salmon fillets, skin on, of similar thickness, about 3 lbs; wild salmon is preferable, or sustainably farmed. Line a cookie sheet with two very large pieces of heavy-duty tin foil -- a good 5 inches longer than the salmon. Lay one fillet of salmon on top of the foil and sprinkle  with salt and pepper; spread the masala on top, then cover with the other fillet. (Remember: the masala has enough salt to make  taste good; you need to sprinkle the cavity with enough salt to make the salmon taste good, too.) Fold and crimp the tin foil around the fish to make a tight seal, leaving a little bit of air space inside the packet.

3. You can bake this in the oven, leaving the foil packet on the cookie tray (375˚F for 50-60 minutes; tear back a bit of the foil and peek with a knife to check for doneness or use an instant read thermometer, with a goal of 130˚F), or on a charcoal grill (bank the hot coals onto one side of the grate and cook over the non-coaly part -- indirect heat -- for 50-60 minutes). Cooking times depend on the thickness of the salmon; start checking after about 30-35 minutes.

4. Let rest for about 10 minutes after you take it out of the oven/off the grill, and be careful of the released steam when you cut the foil packet open. Enjoy the salmon with some of the masala, piping hot and fragrant.

Lisa Lambert said…
Why the hell did you not cook this? Brad only ever carried garlic with us. This would have been much better!
June 7, 2012 at 10:48 AM

The Invisible Flaneuse said…
Lisa: can you imagine how heavy it would have been to carry onions, tomatoes, cilantro, chilies, ginger, spices... in ADDITION to the garlic?!

Brad V said…
You caught fish with your t-shirt? Why not just claim that they crawled out of the lake and plopped themselves in the pan?
June 10, 2012 at 9:10 AM