Pickled Beets are a metaphor for nothing 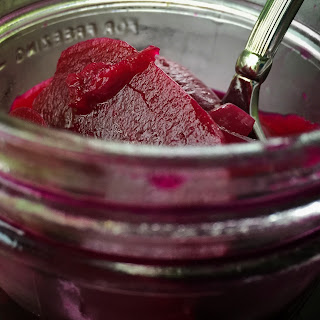 Okay here's the thing: I seem to have run out of things to say. I considered just stopping the blog -- it's run its course, served its purpose -- but sometimes I just want to post recipes, you know? So. Just a recipe. These are insanely good. I used baseball-sized (not softball-sized -- know your sports), very fresh beets.

1. Run 4 pint-sized mason jars through the hot cycle of your dishwasher. Have canning lids and rings ready.

2. Put the beets in a large saucepan and cover generously with water. Bring to a boil, reduce heat to medium-low, cover and simmer until the beets are fork tender. This will take between 25 and 45 minutes, depending on the size of your beets. Set aside 2 cups of the cooking liquid. Drain the beets and let cool.

3. When the beets are cool enough to handle, slip their skins off and cut into thin-ish slices, no more than 1/4" thick. Divide the beet slices and onion slices among the jars.

4. In a saucepan over medium heat, combine the reserved cooking liquid, vinegar, sugar, spices, and salt. Bring to a boil, stirring, until sugar is dissolved.

5. Ladle the hot vinegar mixture into the jars, leaving 1/2" headspace. Distribute the spices among the jars. Wipe the rims of the jars clean, cover with canning lid, and tighten the ring with your fingertips until tight. (Don't use your whole hand to tighten the ring -- that will make it too tight.)

6. Bring a large pot of water to a boil (it needs to be deep enough to cover the jars by at least an inch of water). Place a folded up tea towel or a silicon hot mat or some similar object in the bottom of the pot so that the jars don't jiggle and (god forbid) crack. Lower the jars into the boiling water, and let them process (boil) for 7 minutes.

7. Remove jars carefully from pot and place on a tea towel. Allow the jars to sit there, undisturbed, for 24 hrs. (You may or may not hear the distinctive "ping" of the jar lids sealing; as long as you can't push down the little bubbled top of the jar, it's sealed. Don't worry.) Allow the jar to remain sealed for at least a week for the flavors to develop. Store in a cool, dark place. When you open a jar, store the remainder in the refrigerator for up to a week or two.

Anonymous said…
Here's one person who hopes you keep it going. Interesting ramblings and great recipes.

Sarah Silva said…
Excellent Blog! I have been impressed by your thoughts and the way you
Friendly Sleep