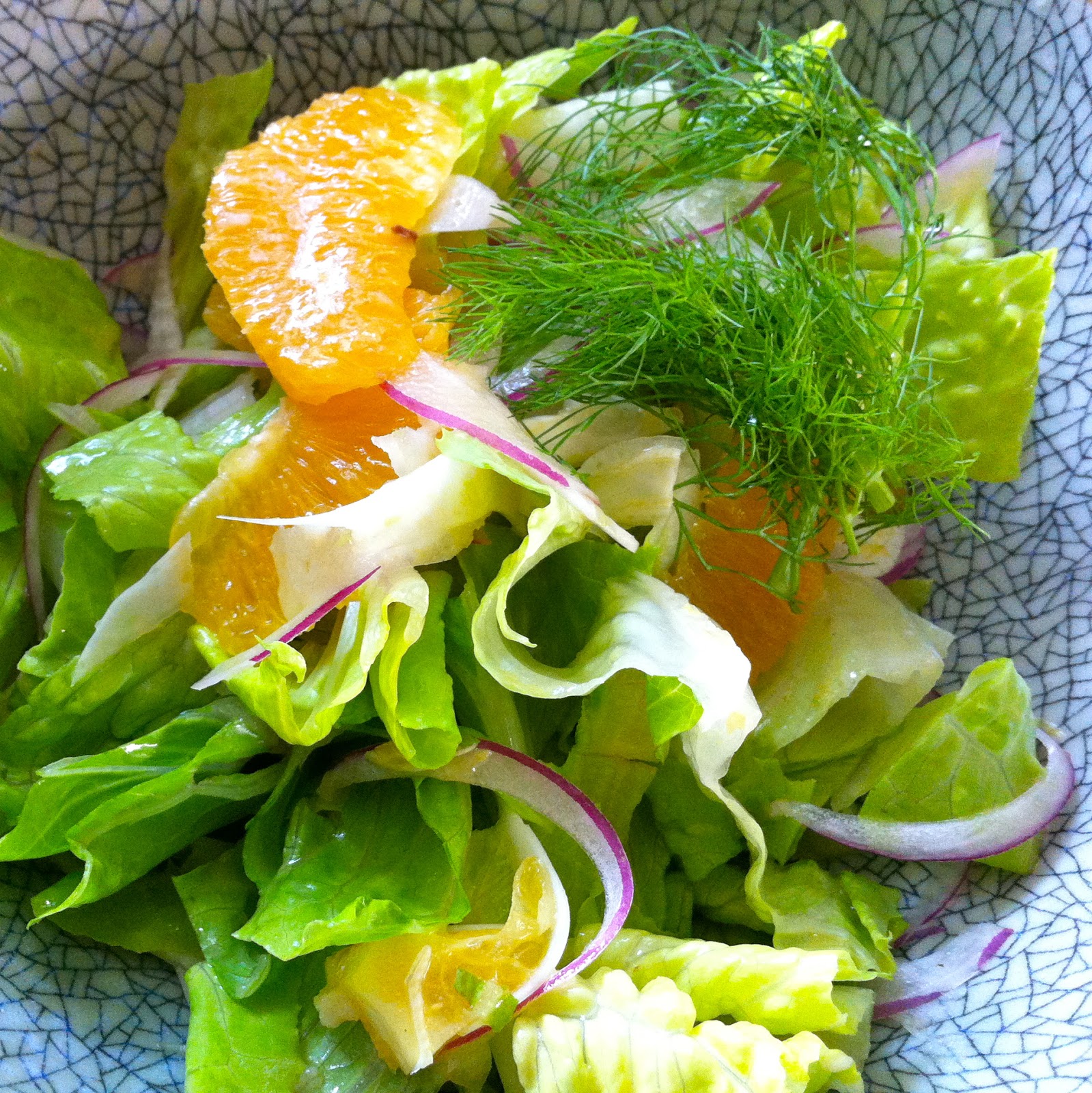 An acquaintance of mine is going through a divorce. I don't know her that well, but we've been talking a lot about what the first days, weeks, and months are like when you suddenly realize that the structure to your life -- your routines, habits, reliable markers of the day or of forever -- are gone. There is comfort for her, I think, in knowing that the very particular complications of one's split lead to very familiar types of dislocations. Half of the trauma of the end of a marriage is not the drama of heartbreak, but the banalaties of loneliness: the accidental setting of an extra placemat when friends come over for dinner because you long ago internalized a math that no longer works, waking up curled into the same corner of the bed you occupied when someone else was on the other side, running the dishwasher and doing laundry less often and in half loads, the shortened message on the voicemail greeting, the extra space in the closet and on the bathroom counter and in everything. All the extra space. Divorce as agoraphobia.


But the strangest thing, we concluded, is preparing food. At first, in those days and weeks, I didn't eat anything myself, and would robotically go through the motions of the day. I'd take my daughter, more often than I'd like to admit, to our favorite -- ridiculously good -- Szechuan restaurant where we all used to go regularly before, when we were intact. After the owners realized we'd split, they treated us (especially my kid) with especial kindness, always coming over to give P. hugs and tell her she was their favorite customer, and making a point to remember her favorite dishes so she felt at home. They always served her a special dessert at the end -- usually a thin, lightly sweetened soup of tapioca balls. Eventually, as I got back on my feet, I would cook P.'s favorite dishes and make sure she had a "normal" dinner time; I, however, couldn't stand the idea of having a meal so early with her or later alone. Eating by myself felt, weirdly, like drinking alone: like getting too much into the habit of it would mean I would get totally addicted, except not to the food but to the aloneness. I would eat a bowl of cereal instead, sitting in front of my computer watching old episodes of "Weeds." Totally not depressing and pathetic. Totally.

Moving out to the idyllic village where I now live changed things for me: with the shift of scenery came a shedding of the old habits. But still, after three years, I can't judge the correct amount of salad to make, or the number of scoops of rice. I eyeball quantities, and they are invariably quantities for one extra person. On the plus side, there's always something for lunch the next day. In the minus column, it makes me realize how much I miss being married. Not to any person in particular; I just miss being married. I feel my uncoupledness the way an amputee feels his injury, living with phantom sensations of his missing limb. He doesn't feel whole. It's not that he wants that particular arm back -- an arm is an arm. But prosthetics aren't the same -- they take so much time to get used to, they don't fit right, and they need to be replaced every so often. So he longs for the feeling of having an arm, because even if he learns he can get along very well in the world without one, he'd just rather not.

One of my very close friends revealed to me, a few years ago, that her marriage was on the rocks. It was an incredibly hurtful situation, and her husband was both shaken to his core and unable to stop loving her. I watched in utter amazement at these two people trying to put things back together; I was -- still am -- incapable of imagining anyone else I know being willing to go through that work, living through the sorrow and anger and guilt and confusion and sheer effort of rebuilding trust. When I went out to visit them a few months later, they talked to me, separately and together, about what it had been like to go through everything. My heart broke for them, and broke for me -- again, because empathy is a fucker sometimes -- and all I could do to deal with their raw emotion was make them a meal. It was Easter. A meal to make a marriage rise from the dead.

I went to my beloved Berkeley Bowl, one of the main attractions of the East Bay area for me; I didn't know that many varieties of produce (of radishes, of grapes, of pears, of lettuce) existed until I shopped there. I came back armloaded with food, and in the morning we began to cook, all of us hanging around in the kitchen in our pajamas and chopping and peeling and prepping. My friend's husband refused to let a single scrap go in the compost -- he gathered up every last bit of peel and rind and skin and made the most beautifully scented vegetable stock -- and my friend stayed mostly on the sidelines, making tea for us all day. There was roast leg of lamb and all manner of side dishes, too many because I couldn't resist the vegetables at the market. We sat down at the table, my friends, my daughter, their daughter, and I, and -- for the first time in months, it seemed -- they ate a meal together without pain or guilt or rancour and (perhaps more importantly) without having to pretend for the guests that everything was okay. It was a wonderful night. It was an honest night.

I went to see them last year, in a tiny village in France where they live now. We all cooked together again, different things, but my friend's husband talked a lot about that meal we shared back in the U.S., how perfect the lamb was, how good the salad and the potatoes and whatever else was on the table were. I could see the tiredness in both their eyes; it was still hard, even after the passage of all that time. And I could see the love. But with all the talk of that meal from two years before, it was hard not to see the past instead of the future.

Salad with Fennel, Orange and Red Onion
Serves 1 more than I ever think it will 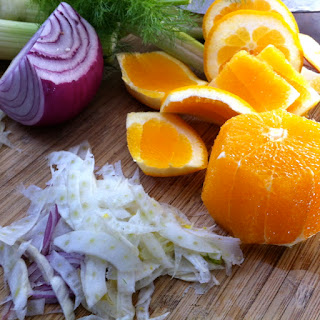 3. Section 2 blood or navel oranges: with a sharp knife, cut off the peel and pith of the orange in strips so that the flesh is exposed; working over a bowl to catch the juices, hold the peeled orange in your hand like a baseball, and use the knife to cut out the sections between the membranes. Squeeze the remnants over the bowl and reserve juice.

4. Make the dressing: in a jar, put 1/3 c good olive oil, 1 tsp mayonnaise (Hellmans/Best Foods is best), 1 tsp Dijon mustard, 2 TB reserved orange juice, 1/4 tsp kosher salt, 1/4 tsp black pepper, and 1 TB sherry or wine vinegar. Shake; taste for salt and for vinegar -- you may need to add more of both to get the right amount of bite.

5. Place all the salad ingredients in a bowl; toss with vinaigrette. (You may not end up needing the whole amount of dressing; start with half and add more till the ingredients are well-dressed.) Arrange on platter and garnish with fennel fronds.

Cherry Clafoutis
Serves 8 if you're restrained and polite 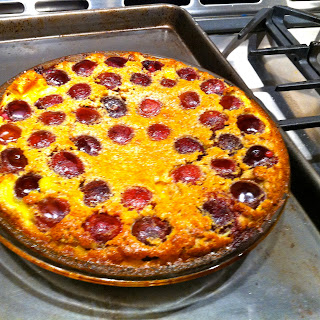 This is an incredibly simple, and delicious, dessert. I put in whole cherries; you sort of pick them out of the batter and eat around the pits, in typical French fashion. You can, of course, used pitted cherries, or other fruits such as apricots, peaches, or pears, if you're all "I must not touch my food" about it.

2. Place cherries (about 1 lb whole) in the baking dish.

3. Combine 6 large eggs and 1/2 c sugar in a mixing bowl and beat with an electric mixer until frothy. Slowly incorporate 1 c milk, 2/3 c unbleached all-purpose flour, 1/2 tsp vanilla, a good pinch of salt, and the melted butter until well-blended.

4. Pour batter over the cherries. Bake in a 400˚F oven until the batter is firm and golden, 30-35 minutes. Remove to a rack to cool. When slightly cooled, you may want to sprinkle it with confectioners' sugar to make it look pretty. Serve warm or at room temperature.
Email Post
Labels: appetizers cherry clafoutis dessert divorce orange red onion salad salad with fennel side dish vegetarian

Unknown said…
I have been divorced over six years, and I still haven't mastered cooking for one. I tell myself I'm "just going to have leftovers," and that is true, but it's also true that I long to have someone to cook *for*.

And your description of the loneliness at the end of marriage was heartbreakingly spot-on. After my divorce, the toughest part wasn't missing my ex (as I never really had to let go of him, just redefine our relationship) but missing the life we had together. We weren't the most stellar couple, but we were comfortable together, and we had a good life, and I still miss that.
June 1, 2012 at 12:43 PM

The Invisible Flaneuse said…
That's exactly it. From the minute we split, I never wanted *him* back. But I have intensely wanted coupledom back.

Partly because, as you say about having someone to cook *for*, there is something incredibly humanizing about caring for another person to whom you don't have the same obligation that you do to a child -- someone that you decide every day to care for.