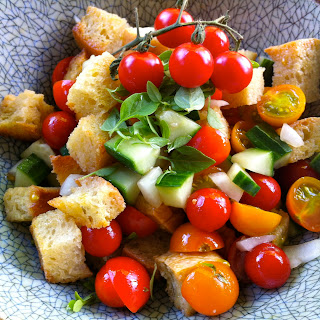 I have tried many times to bake bread -- not just to bake bread, but to become a bread baker, which strikes me as something entirely different: anyone can make a loaf now and then, but it takes a certain discipline to make bread regularly, as part of a daily practice of life.

Discipline, practice -- the words sound rigid, don't they, but I don't mean them to. On the contrary, I imagine bread bakers are akin to people who do yoga or people who medidate; the activity becomes so much of their routines, their measured movements, their breathing, that it's not an imposition of willpower but just a natural part of their days. Wake up, do your sun salutes and mindful breathing, and then knead the dough. Exhale as you push into the glutinous mass with the heel of your fist, your fingers strong but still loose, your arms engaged but not stiff, and inhale as you pull the dough back gently with your fingertips, caressing it into a a ball again. Exhale, push your hands down, inhale, pull your fingers back. Exhale, inhale. Exhale, inhale. The dough sits; it rises. You go about your day, knowing it's there, alive, on your counter, under the floured cloth, breathing, inhaling and exhaling, growing. You plan your day around it, the way you might a visitor, making calculations about when to go to the store or go for a run according to what the dough will need to be doing at that moment (resting, rising, baking). You weave it in. You submit yourself to its rhythm.

And yet it never becomes routine, does it? Every day the conditions are different: the temperature, the humidity, the air pressure. So every day the dough feels a little different and rises a little quicker or slower. Every day your visitor is different. And you accommodate it all the same, but the way you do so varies. You have to go with its flow; no matter how much effort bakers have made to find ways to make bread work like clockwork, save industrial methods and ingredients it never really can. Yeast, apparently, has its own free will. You can speed it up, to a degree, maybe slow it down a little, but you can't control it.

So. I've tried. I've mostly failed. There was a point, quite a while ago -- before my child was born -- when I did become a baker, more or less. It lasted maybe two months. Not quite so long as I did yoga (close on three years) and much longer than I meditated (around 25 minutes). I would make loaves flecked with parmesan and cracked Telicherry pepper, or rosemary and garlic, and let them rise in my overly-warm NYC kitchen and bake them at the end of the day till they were golden and the apartment filled with the aroma of flour caramelizing and yeast dying, which, strangely, is one of the most comforting smells in the world.

I was in this groove, as I said, for about two or maybe three months; before and after that, I was or have been a disaster. (Or, really -- as much of a disaster as one can be making bread; the fact is that even mediocre or bad fresh-baked loaf is pretty damn good.) I still can't figure out what I've been doing wrong. Am I kneading too little? Not letting it rise enough? I feel as helpless in my breadmaking as I did when I brought my daughter home after she was born. The prenatal classes assured me that I would be able to figure out the difference between hunger cries and soiled diaper cries and sleepy cries and boredom cries but for god's sake, she was days old and it only ever sounded like one thing: fire alarms going off in my head while cymbals clashed beside me and someone yelled in my face. All at once. I could not hear a difference, and what's worse I felt like a complete failure for not being able to do so. Same with the dough: if it was telling me it needed something else, I certainly wasn't skilled enough in bread-ese to be able to attend it. But there is less at stake being a failed bread baker than a failed mother, so I've been perfectly alright giving it up.

I should start doing yoga again, though. And maybe check on my daughter. Be right back. 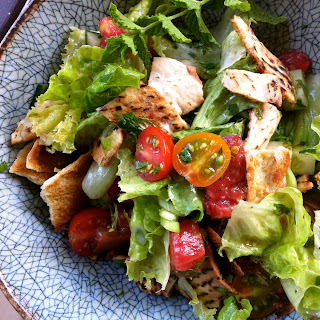 1. Cut open a loaf of pita bread and toast it under a broiler or in a toaster oven until it is dried and crisp but not browned, turning it once. Break into small pieces by hand and set aside.

4. Just before serving, add the toasted bread to the bowl and toss well with the dressing. Let sit for a few minutes before serving.

For the bread, use something that has some chew, like a good batard. I don't generally remove the crusts because I like crunch, but you should feel free to do that if you want something slightly less chewy. Please don't use supermarket "French bread" with an insipid crust and a Wonder bread-like mie (the French word for bread flesh); it will taste awful and soggy. Speaking of soggy: traditional panzanella uses bread that is soaked and squeezed, so it is much soggier than this version. I make no apologies.

1. Cut some hearty French bread into 1/2" cubes; you should have about 2 c. Spread on a small baking sheet and dry in a 400˚ oven until crisp and just starting to brown at the edges.

2. In a medium bowl, add 2 c perfectly ripe tomatoes (I used yellow and oranged cherries, currant tomatoes, and black krim tomatoes; halve the cherries and cut the larger tomatoes into a 1/2" dice). DO NOT ATTEMPT IF YOUR TOMATOES AREN'T PERFECT. Toss the tomatoes gently with a good pinch of sea salt and let them sit for a few minutes.

4. Make a simple dressing with 3 TB good olive oil, 1 TB red wine or sherry vinegar, cracked black pepper, salt, and 1/2 tsp minced garlic (or to taste). Pour over the vegetables in the bowl, add reserved croutons, and toss gently to mix. Allow the salad to sit for about 5 or 10 minutes before serving, mixing once or twice, so the bread absorbs the tomato juices and dressing.

Anonymous said…
IMHO, not that I know anything about baking bread, Is it an idea of how the bread should be, (how we all want to be, or want things to be), a standard we impose on ourselves to be- amazing all the time :) The hunger to be the best version of yourself already makes you amazing. Keep writing, especially loved the piece about Priya in Paris <3 Ambi
August 22, 2012 at 12:05 PM

Kat said…
My bread-making experiences have been very similar to yours. It's a science I haven't attuned to the finer points yet. But...I have discovered Jim Lahey's no-knead method and have had much better success. Just what I've always imaged a perfect loaf to be. Crusty on the outside, airy on the inside, the fine grains of cornmeal falling from your fingers when you pick it up. It's divine.
August 23, 2012 at 1:50 AM