Our Food, Their Food 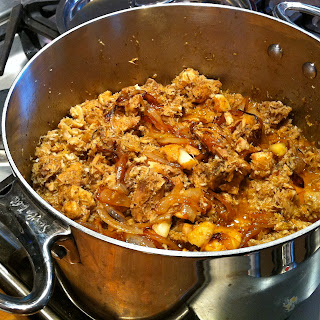 When I was a child, my father took our family to Mangalore, the lazy, tropical city on the Konkan coast of India, to meet my aunts and uncles and cousins and second cousins and third cousins and great aunts and great uncles and step-great aunts and etc. The family joke is that when I got there, I would look at every street sign, every shop sign, every person I saw whose name was some variation of mine -- D'Souza, De Souza, Da Souza, de Souza, d'Souza, etc. etc. -- and ask whether I was related to him/her/it. It seemed impossible to me, the kid who had grown up on the Canadian prairies where my name caused all sorts of confusion (and even some aggression -- when I was in grade 6 a school librarian redubbed me "Aurora" despite my objections) that in this place halfway around the world it was the equivalent of Smith or Jones.


The reason they all had my name, of course, had nothing to do with family ties and everything to do with the contingencies of history. The Portuguese explorer Vasco da Gama showed up there in 1498, and by 1520 the Portuguese wrested control of this strategic trading port away from the Muslim traders who acted as agents for their Arabian masters; the local Indians mostly stayed out of the way, until -- of course -- the Roman Catholic Church got involved in the whole affair. The legends of the mass conversions of the Mangloreans are horrific, but they point to the way in which food is not always the stuff of joy: the Portuguese rendered the local Indians casteless -- and therefore not even fully human in the Hindu understanding -- by brutally pinning them down and rubbing the insides of their mouths with pork. After that, the victims were converted to Catholicism; residents of each village were given a single last name.

That pork, though, the instrument of Portuguese violence, became something else in the hands of their colonial subjects, these Mangloreans and the Goans from up the coast who were treated in a similar fashion. Like the various Africans, Brazillians, Chinese in Macao, and Pacific Islanders who were also colonized by the Portuguese, Mangloreans absorbed and remade these cultural impositions, these foods, these prayers, these rites, these rituals, these clothes, these words, these songs, these dances, these names, these lowered eyes and furtive looks, ate them up and digested what they wanted, expelling the rest, until their bodies grew and changed and broke down and died and were reborn in new generations.

There is a way of talking about the colonial experience (wherever it occurred) that imagines that not only would things have been better if the colonists never arrived, if they never looted and pillaged and murdered and shackled and stripped to the bone the countries and the peoples they exploited, but that because of that history of violence all the bits of cultural detritus that infiltrated the colonials' worlds are forever marked as foreign, as inauthentic, as tainted by their original sin of colonial violence. My family still remembers its name, the one they had before the Portuguese gave them the one I bear today. Five hundred years later, some of them are reclaiming it. Perhaps they see that name as that which was taken from them, an inheritance or an identity stolen; fair enough. But ask the same people to give up their Catholicism, their roast pigs, their potatoes, their chilies, their vindaloos and their sausages, their white wedding dresses, their baroque churches, and they would look at you with horror and possibly an incredulous laugh. Because of course it's never so easy to extricate our identities from the knots and tangles of the various threads that go into their making. Vindaloo isn't Portuguese, for god's sake -- it's Indian! Its vinegar (the "vindh" of its name) and its garlic ("alu") and its use of pork were brought by the Portuguese, of course, but does that make it Portuguese? Does it matter? Can anyone remember, really, what came before? And is it worth recovering, that before-ness? Would we have been better off as Kamaths than as D'Souzas? Is the possibility even imaginable? 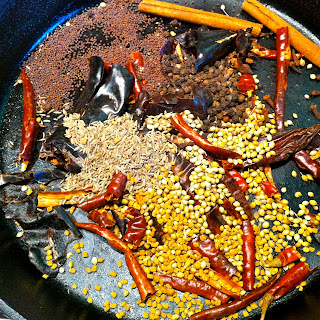 Culture was never something owned by the European colonists, despite their own deepest desires; I imagine (without the authority of history -- I truly imagine) that the violence of colonialism was driven both by economic greed and by a realization that their hold on culture was being snatched away by the savages who were intent on cannibalizing it. They wanted to exert control and reclaim its purity -- they wanted to save themselves from the chaos of the melting pot into which they'd inadvertently found themselves simmering away. And they did so through unimaginable violence and exploitation.

But they didn't succeed. The Mangloreans kept the pork and the garlic and the vinegar and the chilies. They exerted cultural pressure back, too, setting the mouths of generations of Englishmen afire with pleasure and cravings and pain. That's the thing -- that's always the thing, when people try to reclaim their power in the face of multitudes. You can't unstir a pot.

This is a recipe given to me by my aunt Enid Shreshta. A few notes: the amount of spice mix that this recipe makes is quite a bit more than the recipe calls for; I suggest you go ahead and make the full amount and keep the excess in your freezer for when you want to make it again -- trust me, you will. You can also use it as a general curry powder for something like this chicken curry. The recipe calls for a whole chicken, skinned (as always in Indian cuisine) and cut into rather small pieces. There are three options here: you can go ahead and cut the chicken up in the regular western way (two breasts, each cut in half, two thighs, two drumsticks, two wings and two drumettes, and -- hopefully -- the back cut into three or four pieces) and be done with it; you can cut the chicken yourself into smaller pieces (each thigh cut into halves or thirds, drums cut into halves, breasts cut into four); or -- and this was my stroke of genius when preparing for this recipe -- you can go to your friendly neighborhood East Asian grocery store, one that sells fresh poultry, and ask them to cut it into small pieces. It'll taste good any way, as long as you used bone-in chicken.

1. Make the spice mixture: Heat a heavy skillet (I prefer cast iron, but it's not necessary) over medium-low heat and start throwing in your spices. First, your chilies: you'll want 3-4 Guajillo peppers plus about 6-8 chilies de arbol (see picture). Pull off the stems and empty out the seeds; break into pieces and throw in the skillet. Now add 1/4 c coriander seeds, 1 heaped TB black peppercorns, 1 heaped TB cumin seeds, 1 level tsp methi (fenugreek) seeds, 1 TB mustard seeds (brown preferred), 2 cinnamon sticks, 15 cloves, and 1/2 star anise. Mix everything around and let it sit on medium-low, shaking the pan occasionally, until the mustard seeds start popping and everything is fragrant. Transfer the mixture in batches to a spice grinder (i.e. a coffee grinder you use for spices) or a small food processor and create a fine powder. Dump each batch into a bowl, add 2 TB sweet paprika, and mix well.

2. In a large stew pot, add the pieces of chicken, 2 heaped TB of the spice mixture, 1-1/2 medium onions, chopped, 1 tsp tamarind concentrate, 2 tsp salt, and 1 cup water. Bring to a simmer and let boil until the chicken is tender.

Anonymous said…
Lovely essay. I have been learning about Goan cuisine recently. The history you have given makes it all make sense now. Thank you :)
October 17, 2012 at 12:25 AM

The Invisible Flaneuse said…
Thank you for your kind words. Yes, a long break -- have been searching for the words, and the time. Soon.