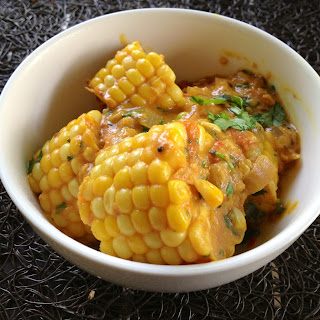 I just cut into a ripe cantaloupe, and was near bowled over by the fragrance -- floral and sweet. It smelled of heat and promised coolness, and it slaked my thirst when I bit into it. A thoroughly successful melon experience.

I put it into the fridge so it would be cold for later, and had to move two jars of strawberry preserves to make room. I call them "preserves" but of course they're more like a runny sauce because I seem incapable of just following a damned recipe when I decide to make jam. Last summer's attempt with blueberries yielded something that solidified to a spackle-like consistency; with this summer's strawberries I erred in the other direction. Not too sweet, happily, with some lemon to make it less cloying.

I don't know if I love summer, exactly: I used to look forward to it when I was a student (a period that lasted two-thirds of my life so far) and then when I was a professor (which counted for most of the balance). These last few years I've had jobs that didn't afford me summers as such. Rhythms change slightly but not radically. I mostly recognize it now for the occasional oppressive heat and humidity, for the mosquito bites, for the disappearance of my daughter for longer periods as she visits her dad.

When I was a kid, I celebrated the last days of school with the rest of my friends, but living out in the country (they all lived in town) meant summer was a period of isolation for me. I'd hide out in the cool of the basement, watching game shows and soap operas while my parents were at work, reading, sometimes doing crafts, waiting for the heat to pass and fall to arrive again. One summer, with one year of Home Ec under my belt, I sewed a shirt for my sister: blue and white stripes, with two ruffles on the front. I'd take half-hearted bike rides around the subdivision, and when my sister and I were feeling ambitious we'd ride the two miles down the dirt road to the 7-11 for a Slurpee. You may have noticed that these aren't exactly sylvan memories, even if they're not terrible ones, either.

Even if I don't love summer as a whole there are things about it that I do adore: the luxuriousness of the plants in my garden; the way the heat makes me thirsty all the time and the delicious feeling of ice water taken in big gulps; the sound of the bugs and the birds in my backyard early in the morning when they think no one's listening; the neighbors on my street who I finally see after months of hibernation; eating with my hands (which I do anyway but now it's socially acceptable, more or less); the snapping turtle -- could it be the same one every year? -- who lays her eggs somewhere in my yard; the sound of my kid thump-thump-thumping her bike off the porch and going for a ride on her own, still a novelty for both of us.

And of course I love the tastes: tomatoes, cilantro, corn, the char and smoke of food off the grill, summer fruit. I dream of the crispness of autumn air or the green smell of springtime, but I fill my mouth with summer most happily.


Corn-on-the-Cob Curry
Serves 4 as a side dish

I had never heard of corn-on-the-cob curry until my aunt Sheila's cook, Malthi, told me about it when I was visiting in December; it's popular throughout the country, made slightly differently in each place. Some versions use yogurt as a thickener, and some use cream; I've made a South Indian-inspired version with coconut milk. In India it's a winter dish, as is corn generally, but to me it's summer through and through.

1. Heat 1.5 TB canola oil, 1/2 tsp cumin seeds and 1/4 tsp brown mustard seeds in a deep-sided skillet or saucepan over medium-high heat. When the cumin seeds sizzle and the mustard seeds start to pop, add 1/2 large yellow onion, diced small. Sauté until golden brown, then add 2 tsp minced garlic and 2 tsp grated ginger, along with 1/2 cinnamon stick, 3 cardamoms, and minced red or green chili to taste. Sauté for an additional minute or so.

2. Add to the mixture 1.5 tsp coriander powder, 1/4 tsp turmeric, 2 tsp sweet paprika, and 1/2 tsp kosher salt. Sauté until the spices are toasted, then add 1 beautifully ripe tomato, chopped fine. When the tomatoes have broken down, add 1/3 c water and let cook on a lively simmer for a few minutes until the mixture looks saucy and delicious; taste for salt.

3. Shuck 2 ripe ears of corn. With a sharp knife, cut each cob cross-wise into 1.5" disks. To the saucepan, add 1/2 can of well-shaken coconut milk and stir; taste for salt. Add the corn pieces, mix around, and let the mixture come to a simmer. Cook for about 10 minutes or so until the corn is cooked and tender.

4. Stir in 2-3 TB chopped cilantro. Serve warm but not hot over rice or with an Indian flatbread alongside. Pick up the pieces with your hands and lick the sauce off your fingers with pleasure.
Email Post
Labels: corn curry corn on the cob Indian food indian-style corn side dish summer vegetables vegetarian

Anonymous said…
omg, that sounds delicious. And such lovely phrases sprinkled here and there. A successful melon experience. I like that a lot.