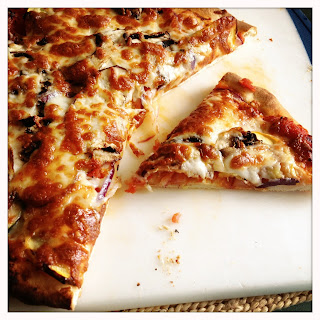 I am not a fan of pizza, particularly.

I know, I know -- practically makes me not human. I say this out loud and people look at me funny. I truly believe that my lack of pizza love was one of the major reasons my marriage broke up (that and burrito indifference). Friends have recoiled when I've revealed my lack of ardor, as if they're scared of catching my pizza apathy.

But of course while I was able to organize my life in a pizza-free fashion at one time, now that I have a ten-year old there is just no way to avoid it. Pizza is part of my existence, like Nickelodeon tween stars, top-40 radio, and The Hobbit. Resistance is futile.


When we moved to this town a few years ago, my daughter dealt with the turmoil pretty heroically -- she'd moved far from her dad, her mom had a different kind of job which required her to be away evenings and weekends and to travel often, her second-grade teacher was a nightmare of epic proportions, she had to make new friends and adjust to a new town, etc. etc. etc. So when she came to me with a chart asking that we designate every dinnertime during the week a "theme night" -- taco night, pasta night, mac and cheese night, pizza night -- I recognized the gesture as her attempt to find some sort of structure and control in a world that had been turned upside down.

We negotiated that list -- I insisted on an Indian food night, especially now that we were in a town where her maternal heritage was less comfortable a fit than her paternal one and so more at risk of being tossed aside, and nixed taco night and mac and cheese night (substituting "Priya's choice" and "Mom's choice" instead). But pizza night was left intact, and even as the schedule eventually went by the wayside, it's the one night that's remained sacrosanct.

We had one pizza joint in town that was our go-to place; it wasn't until a year after ordering pizza that the guy taking our delivery order told me that we had been earning points for each dollar we spent and now had 13 free pizzas to our credit. Every Friday night we'd get a thin crust, smooth sauce, with whatever toppings my kid preferred because I really couldn't care less. It was usually Hawaiian -- ham and pineapple.

But finally, about three years after we arrived here, I hit a wall. I could not eat pizza from our favorite place anymore. The thought filled me with nausea and dread. It was a disaster, and P. let me know her displeasure in no uncertain terms. We tried to order from a few other places in the area (it's a village; there are only a few) but those didn't really do it, either.

So my task was clear. I had to learn how to make it myself, or resign my self to disappointing my kid in the only single thing she'd ever really asked for in exchange for being a complete and total trouper over the past few years.

Now, I realize that there is a certain -- well, at times I think "hubris," but the word I'm looking for could equally be "naïveté" -- to posting a recipe for pizza dough on this blog, because it is one of the most analyzed, tested, studied, MacGyvered recipes around. Whole blogs are devoted to this one single food item, a lot of them quite good. People (mostly men, I will note without further comment) debate endlessly about the proper mixing and kneading technique, ingredients, rising times, baking temperature, regional variations, etc. All pizza discussions seem to start with the basic caveat that unless you have a professional pizza oven, your version will not live up to the best pizzeria slices; the best you can do is try for a respectable home version. Pizza is serious business, in other words. It's for professional amateurs only.

As you all know, I don't consider myself a professional, or even a professional amateur. I am a home cook, that's all. I wasn't going to worry about not having a one thousand-degree oven or a wood-burning fire pit or whatever else one needed to reproduce restaurant-style pizza because the whole point of learning to make it was because I didn't want to eat professional pizza anymore. I was undaunted by the dire warnings. I tested a bunch of pizza dough recipes, trepidatious because I am not, in fact, especially competent when it comes to baking bread and pizza dough is really just bread dough with stuff on it, but lo it seemed to work. Thanks to some crowd-sourced advice from my many talented FB pals, I managed to grope my way into something pretty convincing (as my friend Judith put it).

And so, yay! My kid gets pizza night again, and all is right with her world.

The ideal pizza dough has had a long, slow rise, 24 to 48 hrs in the refrigerator, to develop flavor and chew. However, pizza isn't always a planned two days in advance type of meal. As you can see from the recipe below, I give you some options.

2 tsp dry yeast
1/2 c warm water
1 tsp salt
3-3/4 c bread flour (you can use all-purpose flour if that's what you have on hand; your crust will be slightly less chewy)
2 TB olive oil
3/4 c cool water
Cornmeal for dusting

1. In the bowl of a stand mixer fitted with a dough hook, dissolve yeast in warm water and allow to froth, about 5 minutes. (If you don't see any foam, your yeast is dead. Get some new yeast and start again.) Add flour, olive oil, and salt, and turn the stand mixer on low. Add the cool water, glug by glug, until the dough forms a moist, supple mass -- it should come away cleanly from the sides of the bowl, but still be moist enough to stick a bit to the bottom. Now turn the stand mixer to medium and allow to knead for 5 minutes.

2. Now you have options:

3. Your dough should now be ridiculously puffy and soft and irresistible. You can divide it into three portions to make 12" pizzas (which is what I do). Take each lump and roll it on a lightly-floured counter until you've got a reasonable facsimile of a ball. Now flatten it out by poking it and pick it up and sort of pull and stretch the outer edges until you get it to your desired thickness -- I like mine quite thin. I'm not going to pretend I'm a professional pizza-thrower-person, and it's taken me a bit of practice to get mine round (and don't care, really) so instead of describing the process in detail I'll send you to this very good video demonstration.

4. Place the dough on a thin cutting board or pizza peel that you've dusted generously with cornmeal. Allow it to rest while you place a pizza stone in your oven and preheat it to 500 degrees -- at least 30 minutes so the stone is sufficiently heated. (Always put your pizza stone into a cold oven; it needs to heat up slowly or it will crack.) (Trust me.)

5. When the oven has reached the right temperature, check your crust: it might have sprung back a bit. Restretch it a bit if necessary, and shake it around on the board/peel to make sure its not sticking anywhere. (Sprinkle more cornmeal underneath if you need to.) Now add your toppings. Don't go crazy -- too much will make your crust soggy. A thin layer of sauce is all it takes, as long as your sauce is flavorful and well-seasoned. Slice vegetables with a mandoline to ensure they cook properly in the short time the pizza is in the oven. Don't skimp on the cheese.

6. Slide the topped pizza onto the stone: place the edge of the board/peel on the far edge of the stone and sort of jerk/slide it back so the pizza slips gracefully onto the stone. (It works, trust me.) Allow the pizza to bake until the crust is browned and the toppings are bubbly and crusty and pizza-esque -- it won't take more than 8 minutes or so. Pull the pizza off the stone onto a board/peel using a pair of kitchen tongs. Allow to sit for a few minutes before slicing and serving.

Pizza Sauce
Makes enough to top one batch of dough

In a small saucepan, heat olive oil and garlic over medium-high heat. When the garlic gets aromatic and golden, add tomatoes, salt, pepper, and herbs, if using. Allow to cook at a lively simmer for about 10-15 minutes, until reduced and thickened.
Email Post
Labels: main dish non-vegetarian pizza vegetarian

The Invisible Flaneuse said…
Kat: let me know how they turn out. I found this dough held together really well, even with stretching, and it had some chew, which I was going for.
September 14, 2013 at 3:43 PM

Nandia Vlachou said…
I was about to give up upon reading the 500 degrees part ("I don't have an oven that does that!"), when I realized you probably meant Fahrenheit :) Is there an alternative to the pizza stone?
September 14, 2013 at 7:25 PM

The Invisible Flaneuse said…
Yes! Fahrenheit. Sorry, I forget to specify all the time.