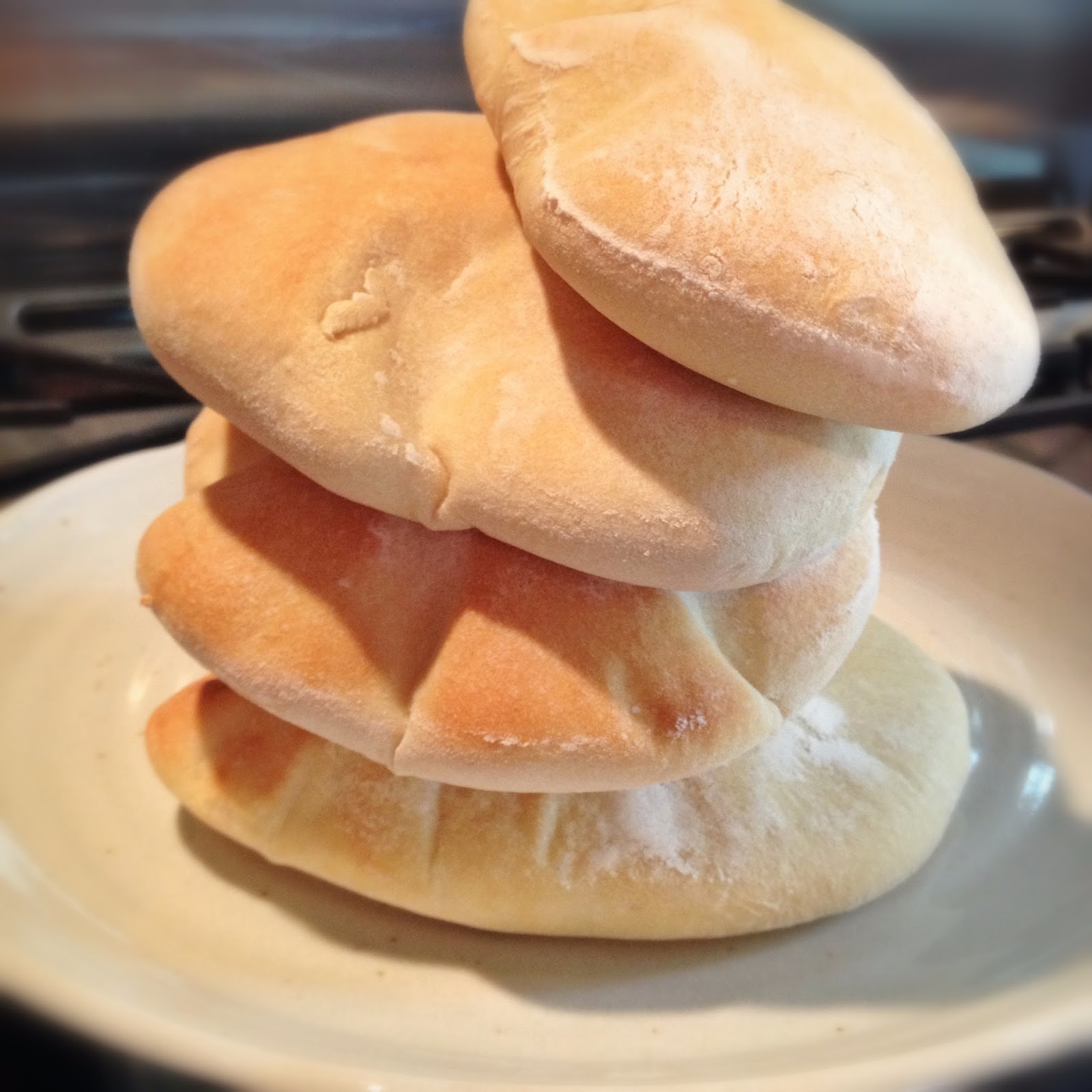 I spent Thanksgiving weekend with some of my favorite people, including my pal Elaine Tin-Nyo. Elaine is an artist whose work has a lot to do with food, and she's constantly dreaming up unlikely dishes based on her really solid knowledge of cooking fundamentals. A couple of weekends before her visit here, she threw a dinner party where she "glove-boned" a duck -- which means she boned it from the inside, so the exterior remained perfectly intact -- and stuffed the critter with the meat from another duck, turned into a sort of sausage mixture. We called this feat of culinary madness a "duckducken," or "duck in duck suit," by turns.

When we talked about what the menu for Thanksgiving would be, Elaine looked at me with all seriousness and explained that she would like to sew a suit for the turkey out of duck skin, and so the turkey would roast, basted in duck fat. I blanched and started stammering, and Elaine burst out laughing at the expression of pure terror on my face.


The fact is, I'm not especially adventurous in the kitchen. There are certain things that I'm willing to take the plunge and try, but I don't have the imagination of a chef -- let alone an artist-chef. I research for quite some time before trying new things, or at least certain new things: while I'm bizarrely confident that I can make moussaka, for example, despite my lack of experience, it takes me years to try a new bread recipe. Years of looking at the recipe once a week, checking to see what could possibly go wrong, looking at pictures of it just to get comfortable with the idea.

This is not a particularly useful character trait for a cookbook author, I think we can agree.

But inspired by my weekend with Elaine -- in which we did not make turkey-in-a-duck-suit, but we did tackle all manner of other delights, including dulce de leche-filled donuts and my first attempt at no-knead bread (recipes to come) -- I have gotten determined to become less cautious and more adventurous. It's only cooking, and a little kitchen mess to clean up, right?

Today's experiment: pita bread. I've been thinking that I should try to make pita bread since it's actually bizarrely hard to come by in my village, and what we get is of fairly poor quality. I dream of the soft, puffy loaves that I've had in good Middle Eastern restaurants. I've pored over recipes for months, wondering how exactly a simple yeasted dough could puff up, almost round, into a pocketed loaf like that. Seems utterly impossible, on the one hand, and yet people manage to do it. I could be one of those people!

The result: incredibly simple, and utterly magical. The dough is easy to work with, and the results are perfect -- puffed up balloons of bread with a nice chew and heft. I served them for lunch today with labneh -- yogurt cheese -- and hummus, along with an arugula salad. 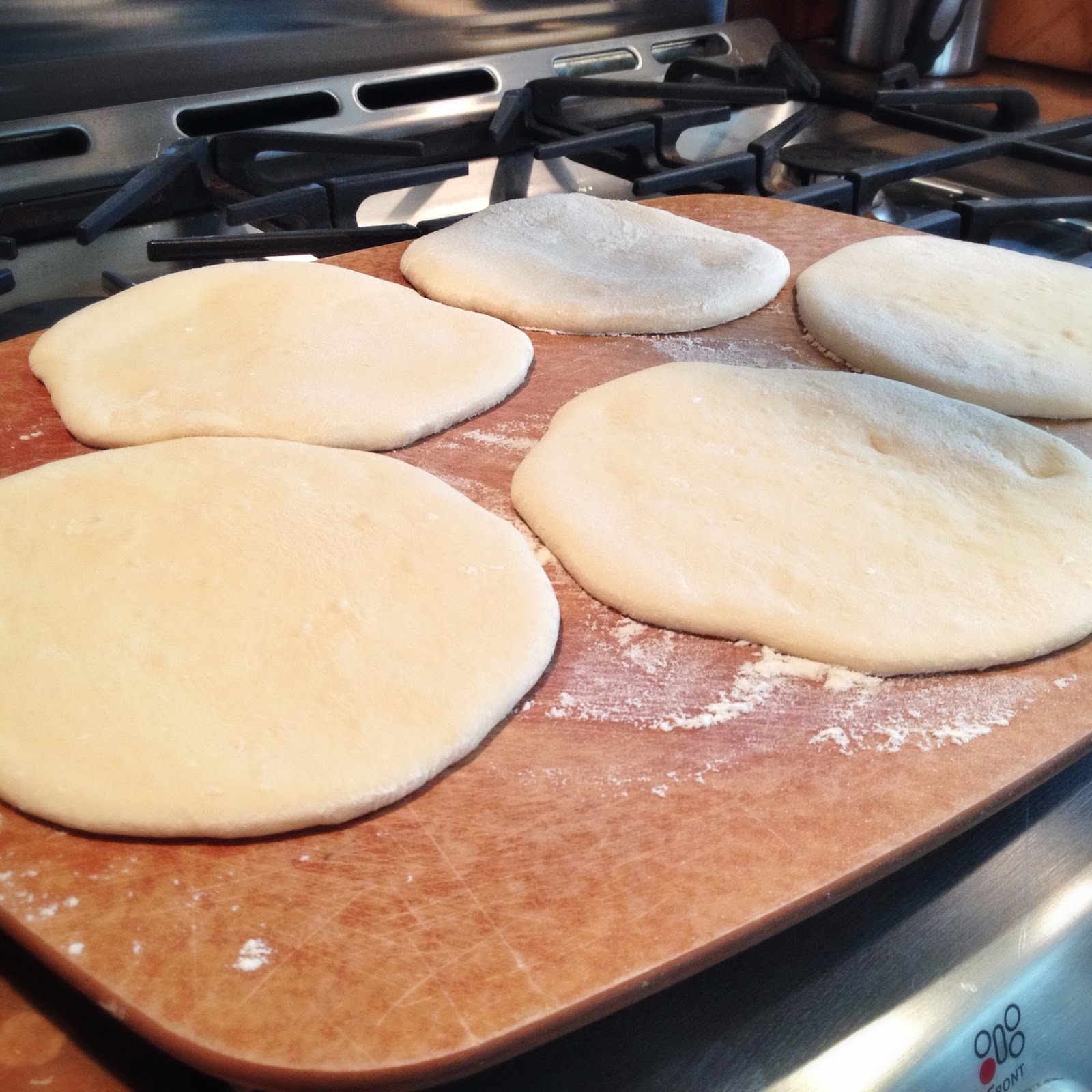 
Note: I've updated this recipe to add a longer rise before shaping the dough; it adds tremendously to the flavor and keeps the bread softer and more pliable.

1. Put water in the bowl of a stand mixer, and sprinkle yeast over top. Let sit for 5 minutes until the yeast becomes a bit foamy.

2. Add salt and half of the flour to the bowl. Attach the dough hook and mix until you have a wet, shaggy mass of dough. Add the rest of the flour and knead in the stand mixer for 8 minutes. If the dough seems much too wet, add another 1/4 c flour, but keep in mind that it should be a bit on the moist side.

3. Place the dough in a bowl lightly coated with olive oil. Cover with plastic wrap and allow to rise for 1-2 hrs until tripled in bulk.

4. Remove the dough from the bowl to a well-floured surface. Divide into 8 pieces, and roll each into a ball. Flatten each ball, and roll into a disc, 1/4" thick. (It's important to keep the disc to an even thickness so that it puffs properly -- so no thinning out at the edges.) When you've rolled out all the discs, let them rest on a floured surface for about 30-45 minutes. They should be visibly puffed at the end of the rise, but only about 3/8" or so thick. 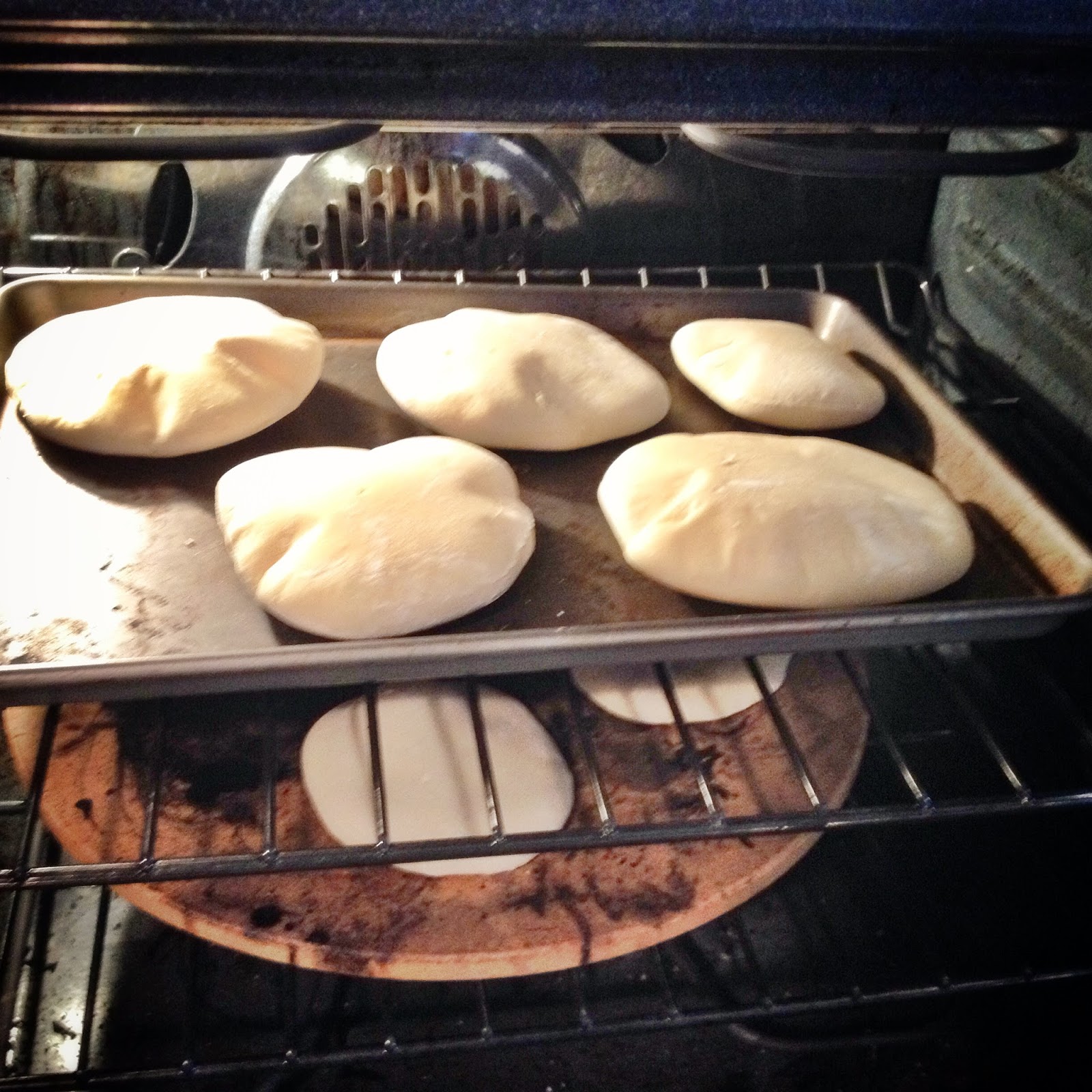 5. Meanwhile, arrange the racks in your oven so that one is right at the bottom and the other is near the top, to accommodate two baking sheets, and preheat  to 425˚ F. When the pitas are ready, flip each one over and place on the baking sheets. (If you have a baking stone, use that on the bottom rack.) Slip into the hot oven, turn on the oven light, and watch the magic: within the first 5 minutes you'll see the pitas puff up to a 4" high balloon. Allow the pitas to cook for 10-15 minutes total, watching after about the 10 minute mark -- you want to take them out at the point they start turning golden, but before they get too crispy.

5. Let cool for a few minutes on the baking trays, then stack them up, flattening slightly as you do so. Eat warm, or store in a heavy-duty ziploc for a couple of days. (Don't worry about putting them into the ziploc while they're still warm; the steam helps soften them.) They also freeze well. 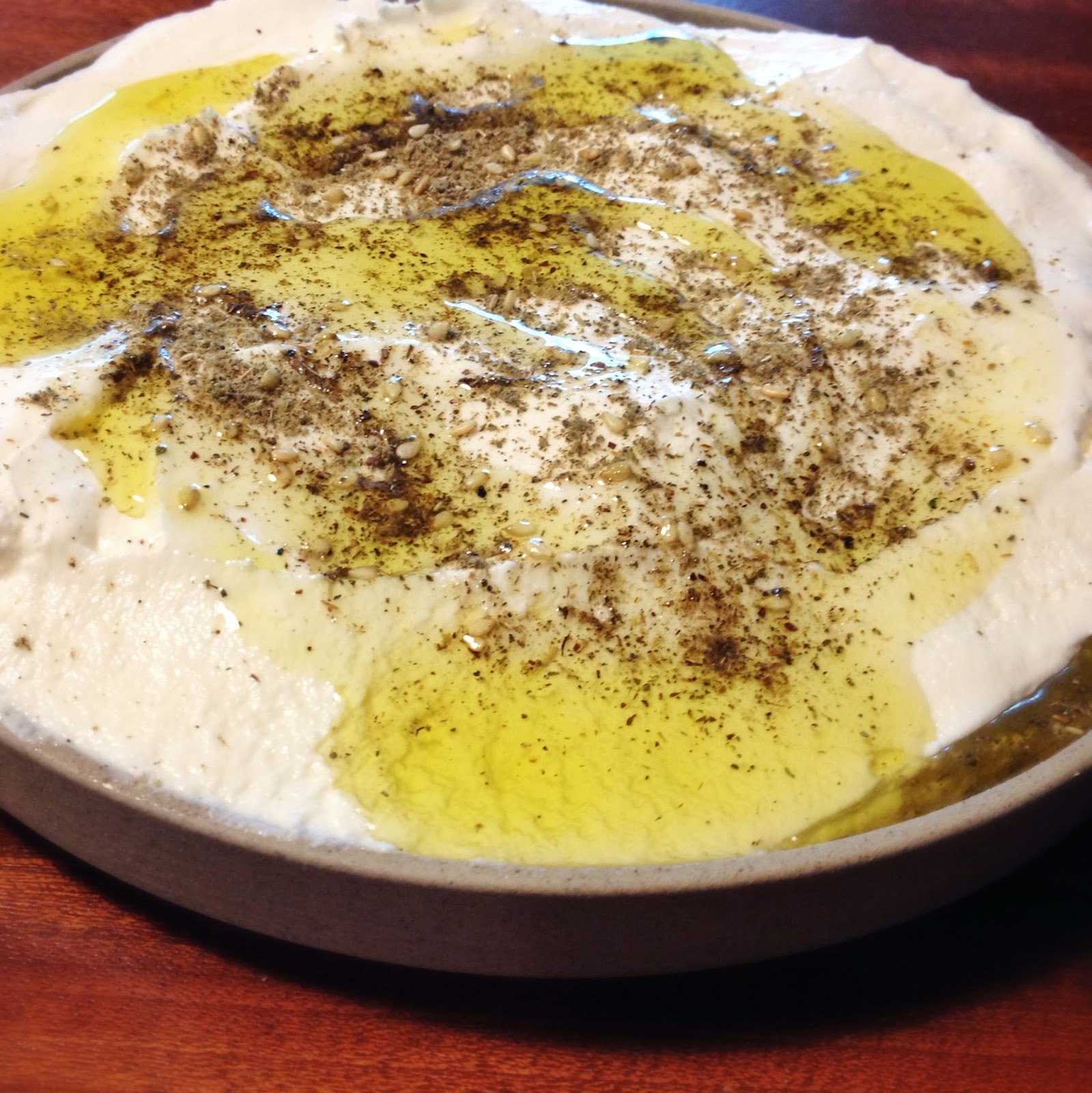 I serve labneh in lots of different ways: spread on toast and drizzled with honey; dressed with finely minced red onion, radish, and scallion and drizzled with olive oil; or, as in this version, sprinkled with za'atar and olive oil.

1.  Line a fine-meshed sieve with cheesecloth and place over a bowl. In another bowl, mix yogurt and salt until combined. Add yogurt to the sieve, and place the sieve-and-bowl setup in your fridge. Allow the yogurt to drain overnight, at least 12 hours. At the end of this time, there should be quite a bit of whey in the bowl and the yogurt should keep its shape.

2. Turn the strained yogurt out into a plate or shallow bowl. Sprinkle on the za'atar and drizzle the olive oil on top. Serve with warm pita bread, pita chips, or crudités.

1. In a small frying pan, toast the sesame seeds over medium heat until they turn golden. Grind them in a spice grinder or mortar and pestle and remove to a bowl.

2. Add the rest of the ingredients to the bowl. Transfer to a glass jar and use as required.
Email Post
Labels: appetizers baking bread labneh Middle Eastern food vegetarian