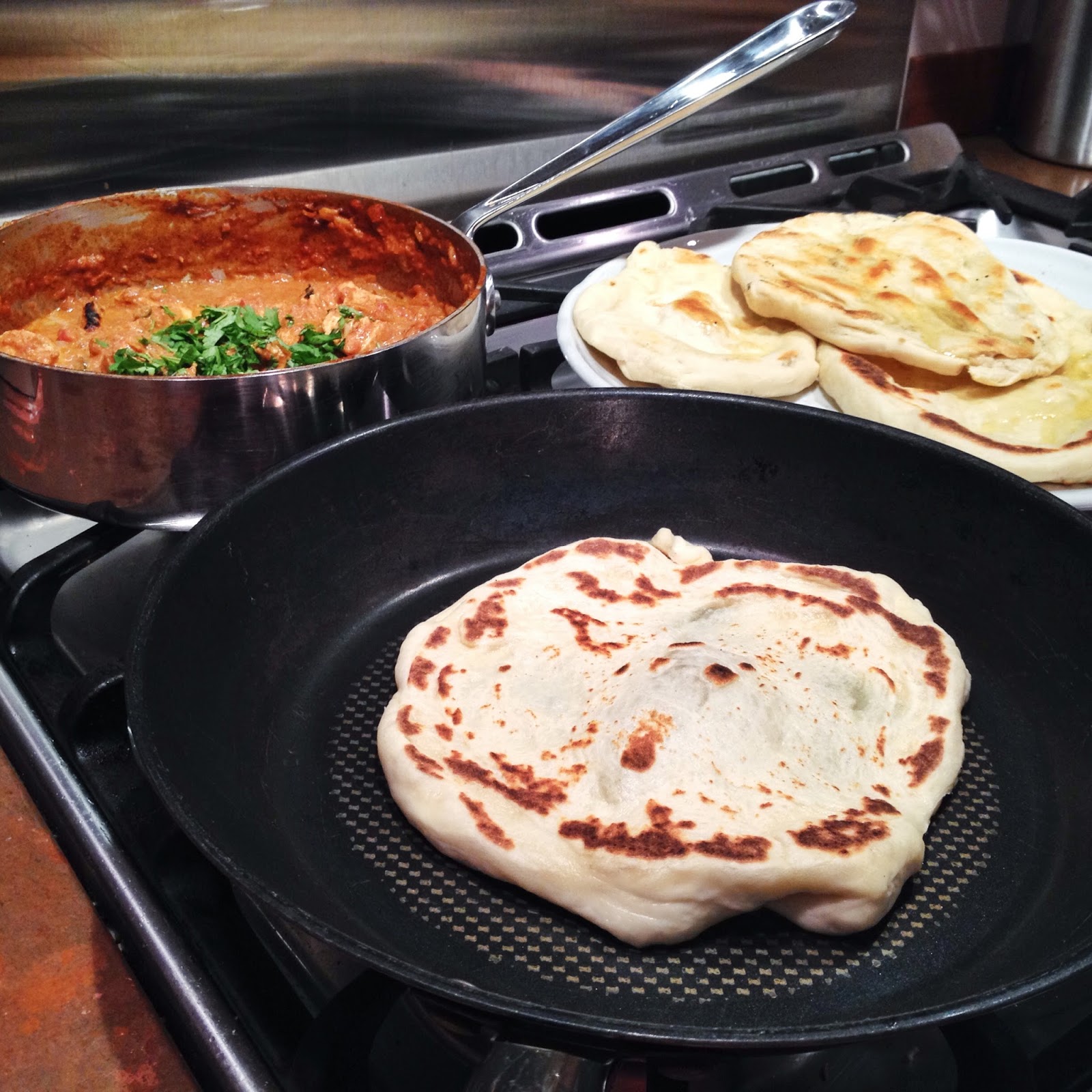 It is a well known fact about Indian cuisine that for all its roots in ancient systems of thinking about body and spirit, it lapped up its invaders' flavors with relish, incorporating techniques and ingredients and all manner of tastes like a voracious maw, always hungry. From the Mughals came the delicacy of a court cuisine with roots in Persia and Turkey, with their nut-based kormas and saffron-scented biryanis; from the Portuguese came chilies and tomatoes and potatoes, ingredients without which most Indian cooking is basically unthinkable.

The British may have come to India for pepper, that most precious of spices, but they stayed for much more. And their time in India had the effect that any other colonizer has on every other land, though perhaps different in its particulars: brutality, exploitation, theft, an abhorrence of the native, all the things one comes to expect of empires, including ours, now.

When the British traders first arrived in India, they were busy fighting off the Arabic potentates who had arrived there first, building ports, trying to get a foothold in what they knew was an almost bottomless resource that they could exploit. They came as colonizers but they too were colonized, in subtle (but hardly equitable) ways: they married Indian wives, began to wear Indian clothes, began to speak Indian languages. They began to sweat the spices they ingested; they began to smell like the colonized.

Victoria put a stop to all that when she tightened her grip on this jewel in her crown, taking over colonial operations from the British East India Company and putting in place a bureaucratic structure that was meant not simply to exploit (if anything like exploitation is simple) but to control. Now the British who ended up in India, smart civil servants with smart wives, knew that the easy ways of those previous tradesmen were not to be emulated. Rather, these new colonizers were to set an example for the uncivilized Indians -- they were to remain unequivocally British.

They wore their suits and gowns through the stickiest seasons, they danced their pretty dances to their pretty music, they dined on proper china plates sent over from home, and most importantly they ate their own food. They brought over cuttings of cauliflower and cabbage and other vegetables from home -- imagine had they not! imagine no aloo gobi! -- and brought their cookbooks, and insisted that their poor Indian chefs (not cooks, now) replicate dishes that they'd never tasted. Croquettes, roast joints of meat, mint jelly, presumably. Every now and then an Indian flavor would sneak in: a peppery dal was transformed into mulligatawny soup; a soothing dish of rice and lentils became kedgeree; and a variety of stewed and braised dishes became the all-purpose, one-size-fits-all curry, now garnished with raisins and apples and boiled eggs and all manner of foreign adornments.

Eventually the empire crumbled, the British went back to Britain (but not before setting fire to the country as their final goodbye). And so did the waves of Indians who decided to invade Britain just as they had been invaded, but with fewer muskets and less organization. These Indians wove themselves into British life, not easily -- not by far, they struggled -- but inextricably. They filled the British streets with the smells of their cooking and the sound of their music (their voices, their laughter, their anger, their fear). The British got used to the food, if not always the people.

There is a story of how chicken tikka masala -- now practically England's national dish -- was invented, but it doesn't provide me with sufficient details to satisfy my needs, so I will make some up. One day a couple -- I imagine them to be middle-aged and lower-middle class, happy to go out to the ethnic restaurant because the owners seemed to treat them like royalty and so it should be --.... Oops, I've lost the thread. Anyway this couple walked into an Indian restaurant. They ordered tandoori chicken, as one does. When the chicken arrives the woman takes a bite, and starts to chew and chew, eventually takes a big gulp of water -- they've refilled their glasses several times so far because the food is just so spicy!! -- and chokes down the bite.

She calls the waiter over, and complains that the chicken is too dry. "Yes, madam, very good, very good," the waiter says, bobbing his head from side to side (this is how Indians say "yes"). The woman misinterprets this as evidence that the waiter doesn't understand a word she's said, and raises her voice to try to explain, enunciating carefully and speaking slowly. The waiter keeps bobbing his head. Her husband gets involved. Voices rise.

Eventually, the owner of the restaurant (also the cook) comes out of the kitchen and hears the problem. The chicken! Dry! The owner is appalled at the idea that this chicken will go to waste. He takes the chicken, chops it up, throws it into a basic masala he has in the back, throws in some cream -- butter chicken with tandoori leftovers. He takes the dish out to the couple, defying them to complain. They eat, suspiciously at first, and then with more enthusiasm.

The owner is amazed; he'd meant to shut them up, not necessarily to please them. But they're pleased, and soon the whole country is, too. These British, he thinks. They'll eat anything. 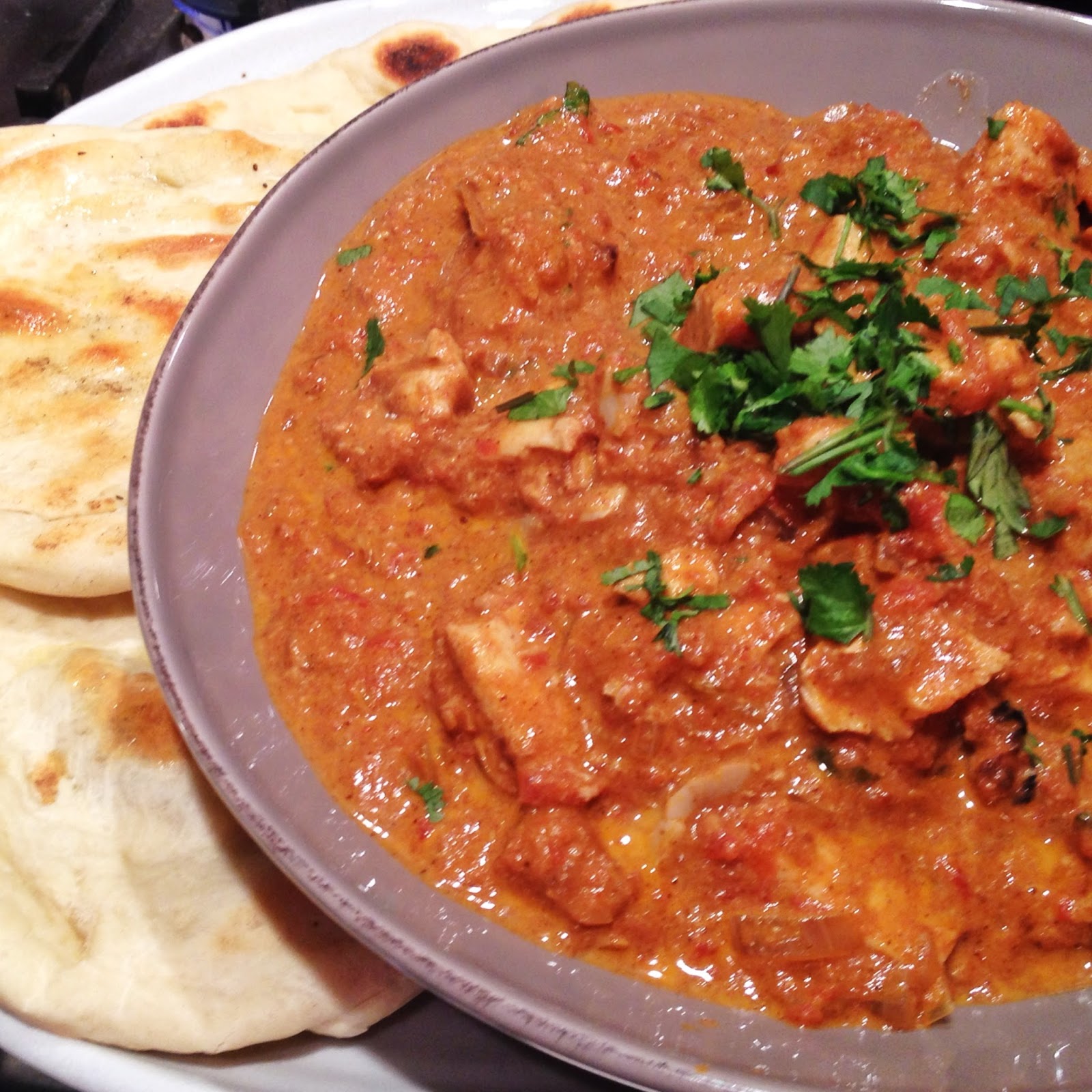 The classic Indian restaurant dish, and perhaps one of the national dishes of England. Chicken tikka is a kind of kebab made of morsels of chicken breast and cooked in a tandoor; chicken tikka masala takes those kebabs and combines them with a mild and creamy sauce.

For the chicken tikka:

2. Make the masala: Heat ghee, cardamom pods, and fennel seeds (if using) in large skillet over medium heat until the ghee is shimmering. Add onion and cook, stirring frequently, until light golden, about 5 minutes. Add garlic, ginger, chile, tomato paste, and garam masala; cook, stirring frequently, until fragrant and the tomato paste has lost its raw red color, about 3 minutes. Add crushed tomatoes, sugar, and salt; bring to boil. Reduce heat to medium-low, cover, and simmer for 15 minutes, stirring occasionally, until thickened and lush. Stir in cream and return to simmer. Remove pan from heat and cover to keep warm.

3. While sauce simmers, adjust oven rack to upper position and heat broiler. Arrange chicken pieces on wire rack set in foil-lined rimmed baking sheet or broiler pan, letting excess marinade drip back into the bowl. Discard excess yogurt mixture. Broil chicken until it is lightly charred in spots, about 10 minutes. The chicken does not have to be cooked through at this stage.

4. Cut chicken into 1-inch chunks and stir into masala. Let the dish simmer for about 10 minutes on low heat until chicken is cooked through and the flavors have melded. Stir in cilantro, adjust seasoning with salt, and serve. 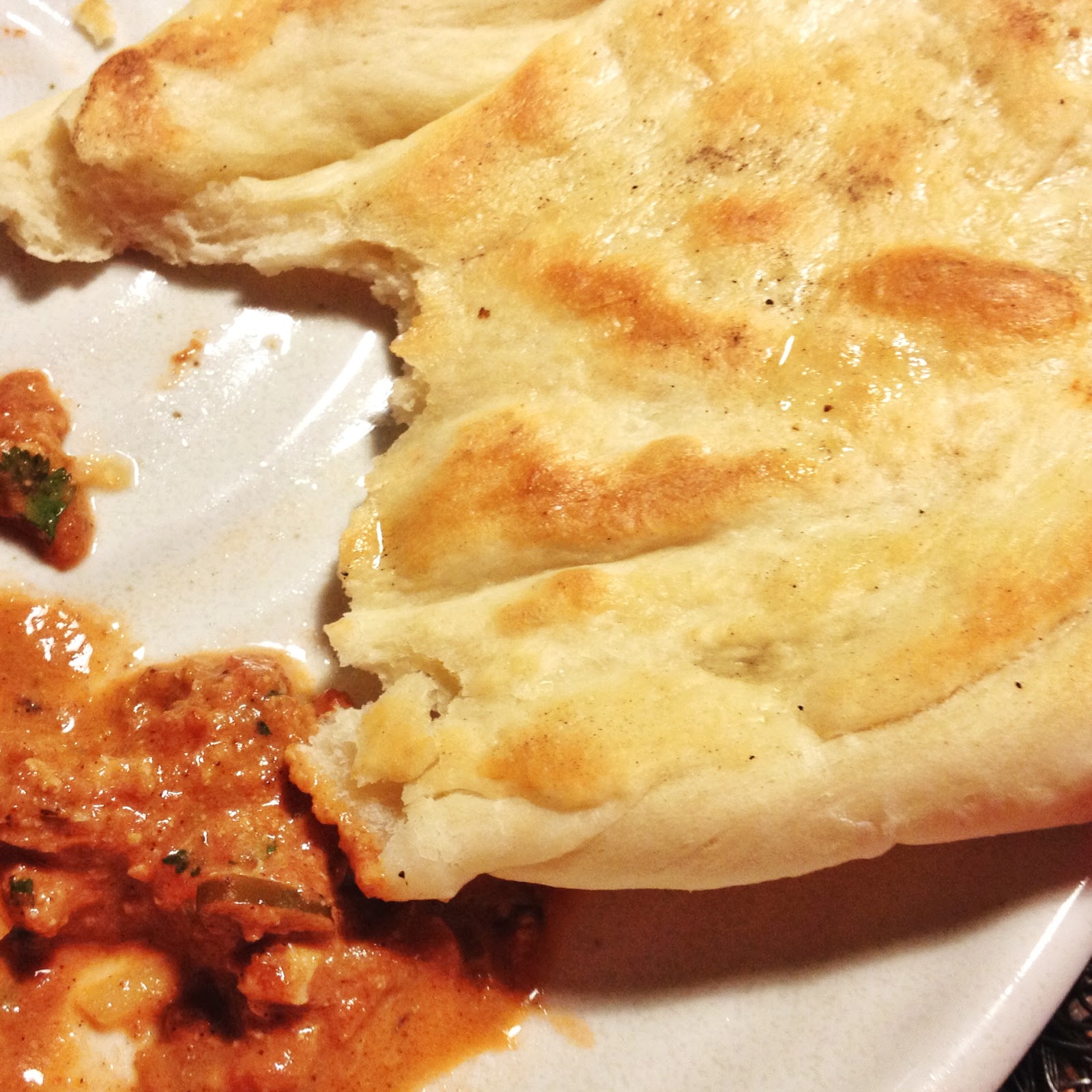 Don't call it "naan bread" -- naan means bread. This is the classic flatbread, traditionally made with fermented dough in a tandoor oven but here adapted for the home cook. The dough is gorgeous and easy to work with. When it comes to shaping, just do it with your hands -- no rolling pin required. The unevenness of hand-shaping makes for a delicious final product, with bits that are a bit crisper and other parts that are pillowy soft. You can make these on a baking stone, but I find they come out softer and more pliable cooked on a pan.

1. Put the yeast, sugar and two tablespoons of warm water in the bowl of a stand mixer and stir well. Let sit. (You can also mix it by hand, if you prefer.)

2. When the yeast starts to foam, add the yogurt and melted ghee or butter, then add flour and salt. Mix on low speed until combined, and then on medium speed for about 4-5 minutes until you have a very soft and slightly sticky dough. (If mixing by hand, mix the ingredients with a wooden spoon till combined and then knead on a lightly floured surface for about 5 minutes.) Put the dough in a large, lightly oiled bowl and turn to coat. Cover with plastic wrap and let sit on a warm countertop or in the over with the oven light on until doubled in size, which will take 1.5-2 hrs.

3. Divide the dough into 6 pieces, and roll into balls (handle it gently). Heat a nonstick or over high heat for about 5 minutes, or a well-seasoned cast-iron pan over medium-high for about the same amount of time. Take one of the dough balls and shape it into a rough circle with your fingers; stretch it with your knuckles until it's about 6 or 7" in diameter, thicker at the edges than the middle.

4. Pick the circle up by one edge so that gravity pulls it into a teardrop shape. Place it in the hot pan. It will start to puff and bubble, and the bottom side with get beautiful reddish-brown spots on it. Turn the naan over and let it cook on the other side. If the naan is browning too fast -- the spots are darkening before the dough is cooked through -- turn the heat down or slide the pan off the heat for a minute.

5. Repeat with the rest of the dough balls. As each naan comes off the pan, brush with a bit of melted ghee and, if you wish, sprinkle with the seeds of your choice. Stack the naans on a plate so that the steam from the ones below keep them soft and pliable. Serve hot.