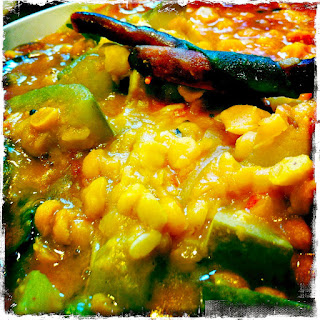 My friend Linda told me I should tell this story, and because I always do what Linda instructs me to, here it is.

One night in New York, a bunch of years ago (maybe 1998 or 1999?) I bumped into Linda -- Linda Nochlin, a much-loved and very brilliant art historian, and my former dissertation advisor, and my daughter's unofficial granny, and one of my best friends -- at a gallery opening. "Let's go out and get dinner," she said. "But first, I have to stop in on a friend's book party. It's in Soho."

We got out of the subway stop and made our way to the right block; it hadn't occurred to me to ask where, exactly, we were going, because Linda had everything firmly in hand. We got to the building. "Oh. It looks very dark, doesn't it?" I said. We got into the elevator. Suddenly, Linda panicked: "Oh my god, I hope it's the right night. I don't even know the hosts!" "Who are the hosts?" I asked, alarmed look on my face.


The elevator doors opened straight into an apartment, and Stephen Jay Gould was standing in front of us.

Now, I have no problem passing a movie star by on the street, pretending not to notice so that I can maintain my urban, sophisticated, blasé attitude. I can be sitting at a restaurant with a celebutante at the next table and have no visible reaction. But you guys -- this was STEPHEN JAY GOULD. If I ever had a chance to edit the academic version of Tiger Beat magazine, he would have been on the cover, despite the fact that he looked quite gnomish. (Edward Said would have had a pull-out poster in the issue. Sigh.) I stood, open-mouthed and agog, while he very graciously explained that the party had actually taken place the night before, and please come inside so he could give us a cocktail. Linda -- a star in her own right -- stammered an embarrassed response and said that of course we couldn't stay and so sorry for disturbing him and oh my god so silly of me. At that moment his wife, a self-described conceptual artist and a big Marcel Duchamp devotee, saw Linda there and with a physical force I still remember, grabbed both our arms and dragged us inside.

"You must see my art!" she squealed. At this point, Stephen (in my imagination we are forever after this on a first-name basis) excused himself so that he could sit down with the poor guest whose conversation had been interrupted by our arrival. In a few minutes, I understood just how brilliant he was, because he sensed exactly when to leave. His wife's art consisted of some of the craziest things I had ever seen. "My art," she explained, a little maniacally, "is participatory, interactive, you know?" Oh great. My least favorite kind of art. As a friend once said, "Sometimes you just want art to leave you alone." Yep.

The woman shoved balls in our hands; I almost dropped mine when I realized that it was, in fact, in the form of a curled up pink fetus. "Now, try and make a basket," she said, pointing to a basketball hoop mounted near the ceiling of the elegant loft. Linda and I looked at each other, aghast, clutching our fetuses in our hands. "Oh, no," said Linda, "I'll just imagine it." "No, you MUST!" "But at my age!" she protested. This didn't seem to be an adequate response, and my dear seventy-year old advisor ended up having to play a pickup game of fetusball in the apartment of the world's most famous writer of evolution, aside from Charles Darwin. What could top this? Playing dead cat bowling at Susan Sontag's house?

Next up we were taken to a large Plexiglas box, shaped like one of those "pick up the toy with the claw and win a prize" games at Coney Island. Inside the box was a male torso. It was covered, logically enough, with strawberry fruit leather. We were instructed to put our hands in two slots so that they would be inside the box sheathed in baby blue, heavy-duty plastic gloves. Then we were ordered to peel pieces of fruit leather off the torso, pull it through a slot, and eat it. Again we protested; again we were forcefully overruled.

After choking down the fruit leather, which tasted of bad art and potential abduction, Linda quite forcefully and with a slightly shrill voice insisted that we had to leave. Stephen Gould, hearing this, jumped up and talked over his wife's protestations, saying how lovely it had been to meet us and to please stop back anytime and how he more than understood that we needed to go; the look on his face said "Oh dear god I'm so sorry about this."

We left the apartment, both in a bit of shock, and went to dinner. And promised each other never to look at art again.

NOTE: Since this was a night of random encounters and aesthetic non-sequitors, so will be my choice of recipe. 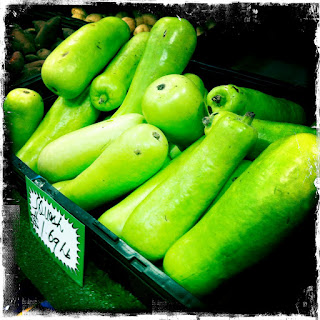 This recipe is my attempt to recreate something that I was served at one of my aunt's houses in 1992. No one remembers the dish -- not my aunt, not her cook -- and though the flavor is still pretty vivid in my mind, it may be some sort of false memory situation. I've used a green, bowling-pin shaped, marrow-type squash that you find at Indian grocers (see photo). If you'd like, you can use zucchini instead, or (as Madhur Jaffery suggests) cucumber, although you'd cook those for less time. I'm giving methods for both conventional and pressure cooking.

1. If cooking the dal conventionally, soak 1 c chana dal or yellow split peas in cold water for at least 2 hrs.

2. Put the dal in a pot or pressure cooker (1 c unsoaked for the pressure cooker). Add 1/2 tsp tumeric, 1/2 tsp salt, 2 coins of ginger, and 2 smashed garlic cloves. Add 3 c water. Bring to a boil (or to pressure); cook for around 35-40 minutes in a regular pot, 17 minutes in a pressure cooker. The dal should be cooked fully but retain some shape. You may have to add more water to the regular pot if it evaporates before the dal is cooked.

3. Add 1 green gourd, chopped into 3/4" chunks (don't peel, but if the seeds are very large scoop them out). Boil until the gourd is soft and cooked.

4. In a small frying pan, heat 1-1/2 TB oil with 1 tsp black mustard seeds, 2 dried red chilies left whole, and 8-10 curry leaves. When seeds start to pop, add 1/2 small onion, sliced. When onions are softened and starting to brown on the edges, add 1 tsp coriander powder and salt; after the spices are toasted, add 1/2 c diced tomatoes (canned or fresh). Let the tomatoes break down a bit, then add the contents of the pan to the dal-vegetable mixture.

5. Adjust for salt, squeeze in some lime juice, and serve hot with basmati rice.

Adele said…
Let me get it straight.

I dont care about sports. Shame on me but I dont even know the
football rules. Never cared less.

What I care about is making money for me and my family.

I tried everything from stocks & forex to internet marketing and
affiliate programs.. I even made some money but then blew it all away
when the stock market went south.

What I was looking is the long term solution that can give me an edge.
I think I finally found it. It is called Z code system.

Z Code is not about sports. It is about following the system and
winning in a long run. That is why it is called sports investing and
not gambling.

Guys will send you game picks and the predictions from the insider
info based on their precise statistical model proven since 1999.

You place the bets and win. That's it.

Don't take my word on it. Check out the proof video here:

These guys combine the power of their human cappers who are experts in
sports with the power of technology: statistical data since 1999.
Their wins are documented and proven - each winning and losing pick is
available for members to check and verify in the members zone.

The performance chart goes straight into profits. Over $12,000 usd
profit for average bet of $100 during the last 2 months!

even if you are skeptical you really NEED to check out how transparent
these guys truly are...
Videos of bank accounts stuffed with money, videos of bookmaker
accounts, screenshots proving how effective this killer software is,
videos of how to make the money risk free, hundreds of real people
testimonials...

...proof, proof, and more proof!! All sitting there for you to
absorb! Don't take my word for it - you have to see it to believe it.

And the best part about it is just how easy it is to use! Everything
about this product is TOP class-

- from the software itself
- to the video tutorials showing how to use the software & picks
- to the comprehensive FAQ & Money management tips
- to the well trained support team lead by Anny.

These guys have everything covered!

Check it out for yourself: