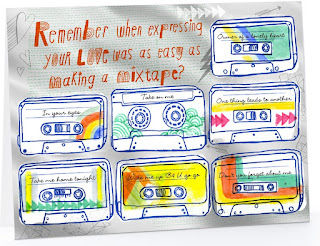 Since I started this project almost a year ago, I have talked about it with a sort of embarrassed self-consciousness, knowing that I am probably the eleventy thousandth forty-three year old divorcée who thinks she knows her way around a kitchen and an emotional landscape and who has, as a result, started a food blog à la eat pray love. Except without the hot subaltern lover. (Adding that to the "To Do" list now.) It's not that being a cliché stops me from doing it, just that it makes me feel slightly sheepish in the aftermath. Somehow, surrounded as I am by writers and artists who are uncompromising in their originality, I feel that I should know better. That I should abandon the pretension of thinking I had anything new to say and just admit that my story -- such that it is, without any great adventures or achievements, with no great tragedies or traumas (touch wood) -- is more or less like any one else's. Why say it if it's been said before?


My friend Michael Minelli -- an artist who doesn't lack for originality, but who, I suspect, gets bored of it sometimes -- gave a talk the other day on the subject, and pointed out the etymology of the term: back in the 19th century, when printers had to lay out the pages of a book one letter at a time, it made sense to take certain repeated phrases and create a single block for each of them so when they came up you didn't have to reset them each time. These readymade phrases were called clichés. Instead of condemning the cliché in the way one might expect, especially for an artist (for aren't all artists obsessed with their own uniqueness?), Michael confessed to a love of greeting cards. Yes, he said, they have a bad reputation for recycling trite aphorisms in place of real emotion, but they are also sort of great: they give you access, however compromised, to the words you need to sustain your relationships, especially at the point that you may not have those words on the tip of your tongue. I love this idea, partly because I love clichés -- they're eye-rolling sometimes, and reductive, and they do can do real violence (no coincidence that the other typographic term for those readymade printing blocks was "stereotype") but they are also a short-hand for concepts so big that we might not know where to begin.

I realized, hearing Michael speak, that there are so many relationships in my life where I've been so disdainful of saying something tired and unoriginal that I've avoided saying anything at all and couched that avoidance in a haughty disdain for the middle-brow. If you'd asked me why back then, it would have been tied to my (feminist) politics and my aesthetic discernment; now I'm not so sure. My ex was the same -- we had the same snobberies. Our first Valentine's Day he announced he was not going to do anything for me, not even a card, because the whole "holiday" was a marketing ploy that he didn't want to buy into; he felt the same about Mother's Day once we had a child. I felt silently guilty for wanting the big bouquet of flowers (to which I would have been allergic anyway) or the bottle of perfume (ditto). I secretly yearned for such gestures, even though, when they came on occasion, I would treat them with a mixture of embarrassment and ironic distance. He would sometimes try to read me poetry, and I would break out in laughter mostly as a defense against my embarrassment for wishing he were serenading me with Shakespeare sonnets rather than the avant-garde verse which I didn't really understand. I was no better, mind. Worse, even, because I defaulted on the side of not doing anything at all because I couldn't think of anything to do that would transcend our standards of originality. I never wrote cards. Too scary to actually think about, let alone pen, what I felt about him.

I wonder if our relationship would have lasted longer and in a happier way if we'd just stopped by the Hallmark store every so often.

Clichés have the effect of lulling us into a sort of brain-dead experience of the world -- is *that* [sunset, handwritten note, mix tape, bouquet of roses, bottle of champagne] really what love is? -- without examining the assumptions behind the readymade phrases or images. The card writers know this, and do whatever they can to make the giver and the recipient forget that they are expressing mass-produced emotion: "I am writing my love to you in permanent ink," says one. Another has a picture of an old-fashioned typewriter on the front, with the words "Just a little love note," as if the lover had made it him or herself. Yet another makes clear the feeling of loss that subtends the gesture of giving a Hallmark card: "Remember when expressing your love was as easy as giving a mixtape?" The front of this card is covered with rough, amateurish drawings of cassette tapes with the greatest hits of the late 90s hand-lettered on their labels. That card, more than any of them, is supposed to speak to me. To speak for me.

But whatever the anomie that seems hidden in their words, such expressions also remind us that we're not alone in our emotions -- that our emotions may be felt in our bodies in certain ways (my heart really does feel like it's bursting when I think of my daughter!), and seem so personal to us, but they are somehow still collective. I experience pain the way other people have, I experience love the way other people have, I experience hate and friendship and hunger and desire the way other people have. Not exactly, but more or less. Writing this blog has shown me that; people respond to its familiarity more than its originality. This is somehow comforting to me, as I navigate the obstacles of life that make me feel otherwise very alone indeed.

So: I will continue with ambivalence. I will indulge my love of the familiar -- comfort food, in both the literary and the culinary senses -- and hope that I manage to stay out of the realm of the banal. Because even if the danger of the cliché is numbing ourselves to life, the opportunity it offers, if carefully handled, is community. 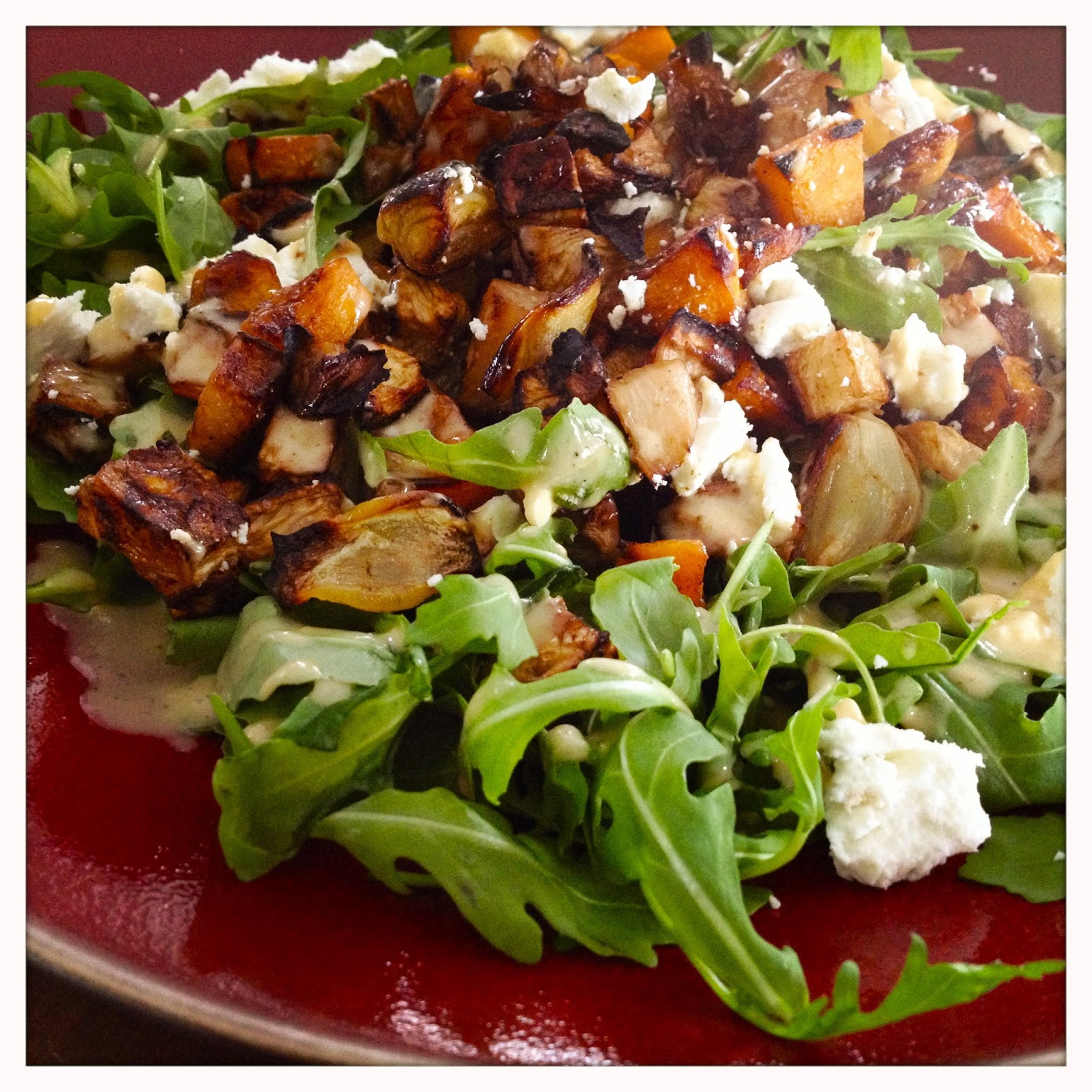 You can make the roasted vegetable and dressing ahead of time and assemble it at the last minute -- which is perfect for a potluck. Oh my god, I just said potluck. Next I'll be throwing Tupperware® parties.

1. Preheat oven to 425 degrees. Cut a mixture of root vegetables into 3/4" cubes: winter squash (I used kabocha squash, which is divine, but you could use butternut or another variety of your choice), celery root, and turnips (my farm share offers a delicious heirloom variety). You should have about 4-5 cups in total.

2. In a large bowl, toss vegetables with 4 shallots, peeled and divided into lobes (cut the big ones in half), 1.5 TB olive oil, 1.5 TB balsamic vinegar, and sea salt and pepper to taste. Spread on a rimmed baking sheet lined with foil. Roast in oven for about 35 minutes, mixing once halfway through, until the vegetables are cooked with a bit of a caramelized crust. Allow to come to room temperature.

3. For the dressing: remove a shallot from the pan and put in the bowl of a food processor or blender. Add 3 TB olive oil, 2 TB sherry vinegar, salt and pepper, 2 tsp mayonnaise, and 1 tsp Dijon mustard. Puree, adding a tablespoon of water if necessary to get the right consistency.

Unknown said…
Las Vegas' Wynn Casino - JTM Hub
Casino. Wynn is a $4 billion resort with four hotel towers with 5,750 rooms and https://vannienailor4166blog.blogspot.com/ suites. Each of 토토사이트 the herzamanindir.com/ hotel towers includes a 20,000 https://septcasino.com/review/merit-casino/ square foot casino and a 출장안마
April 2, 2022 at 8:23 AM