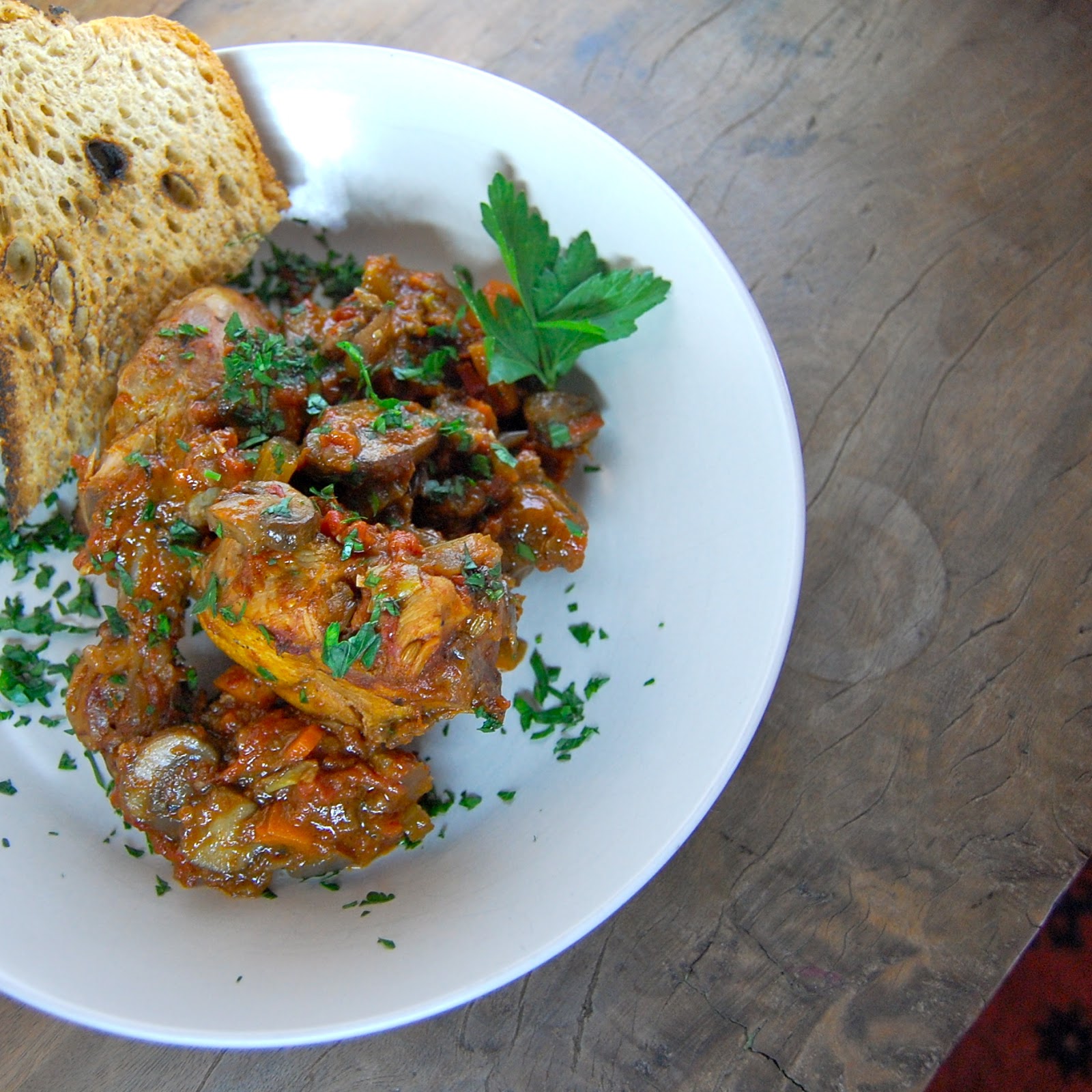 I don't mean little things, like where I put my car keys -- I mean big things. Whole swaths of my life. Events and encounters that should have meant something profound to me, or that should have been lodged in my memory forever. I have no excuse -- no neurological damage to speak of, no blackout drinking binges in my past. I just... forget.

Forgetting is a terrible tendency to have when you're writing about your life, as you might imagine. Memoirists should have good memories.


The other day, in a joking-around session on Facebook, my old grad school roommate Elizabeth reminded me that I knew Nathan Fillion, the actor. I thought she was making this up, a joke among jokes in our banter, but she insisted. And she's right -- Nathan and I went to college together, hung out in the same circles, shared a lot of friends in common, though we didn't really interact. We moved to New York at the same time, me to go to grad school, he to star in a soap opera. Through a close mutual friend, we arranged to go out to dinner one night; he cancelled at the last minute. Talking about it with Elizabeth, I slowly started to recall, until it was vivid -- perhaps a little too vivid. According to the Aruna Embellishment Factor™that accompanies this recovered memory, my brush with fame basically means I was once engaged to the star of Castle.

How could this have escaped me?

I have written about many people on this blog -- parents, relatives, friends, exes, daughter -- and I justify writing about them because it's near impossible to write about yourself, your life, your experiences without mentioning the people who were there in the room with you. It is not easy, of course, to do this; there have been fraught conversations and tearful fights with some, determined silences with others, and a constant anxiety on my part about where my right to discuss my life ends and their right to not be discussed begins. I know I have a much different sense of what I'm willing to reveal about myself than many people I know, and that makes it even more difficult; I present my flaws and failings as a shield, or maybe even as a sword. You can't use them against me if I brandish them in your face first. I don't pretend to think that this is a strategy widely shared. Some of you have told me that you admire my willingness to be open and vulnerable. To you I say: it's an act. None of these places are where my vulnerabilities lay.

The one person I've not written about in this blog -- I've hardly mentioned her -- is my sister. It bothers me, her absence, because it may be read as a sign that she hasn't been a significant part of my life. That's not true, of course. But she asked me not to write about her early on, and I agreed, with some measure of relief. We have very different ideas about privacy, about interacting with the world, and I couldn't see how I could write about her without transgressing her boundaries. She couldn't see how I could write about her without distorting the past, or without my version of the past standing in for fact.

I'm realizing now that it isn't my misinterpreting the past she has to worry about, but my ability to remember it at all.

I went to Canada for a bit of a holiday recently, and somehow the conversation turned to the accidents we all had growing up. My dad and mom and sister told my kid the story of when I fell off my bike. It was a few days before starting high school, and I was riding my dad's 10-speed without holding the handlebars. I hit a rock on the road, and pitched face first into the pavement, one tooth breaking off and embedding itself in my lower lip. My sister ran screaming to call my dad (the surgeon) to get him to take me to the hospital. My dad was, at that moment, focused on hunting down the rattlesnake that had showed up in our backyard, and it was impossible to divert him from the task despite the blood pouring out of my mouth. It was only when he had found the rattlesnake and killed it (don't judge; they're lethal and he had kids to worry about) that he finally drove me to the hospital.

The story is part of our family lore, trotted out every time we get together, now especially relished because it always outrages the grandkids. I can never forget this, thanks to the retelling.

Then my mom mentioned the time when my sister got a concussion. She was in grade 6, a young kid, and it happened in gym class. She was kneed in the stomach and fell backwards, head smacking on the wood floor. She was only rushed to the hospital a little later, after she'd gone to back to class when she started rambling and using the f-word with her teacher -- clearly something was very, very wrong. (I'm laughing as I'm writing, thinking of her at 11 or 12 years old cursing out her teacher. Let's just say: not typical behavior.) My mom (the anesthesiologist) was in the ER when she was brought in, and after some tests it turned out that my sister had a pretty major concussion.

I have no memory of this episode. None. When they were telling the story, my mom and my sister, it was as if I were hearing it for the first time. And how could that have been the case? Doting parents, doctors to boot, serious head injury, etc. -- this was a major event in the life of our family. But for me -- erased. They might as well have been talking about a movie I hadn't ever seen. Not even the re-hearing triggered any recognition. It is a blank spot, an occlusion.

My shrink would have something to say about this, I'm sure: what an effective (if terribly blunt and unimaginative) defense mechanism, maybe. I can't decide if there's a parable here, a warning of some sort, or if it just means I was a typical eighth grader when it happened, so self-involved that if something wasn't about the zit that just popped out on my chin I didn't notice it.

Either way: a reminder to myself and to you. Whatever this blog is, it's not the truth, the whole truth, and nothing but the truth. It's realer and less real than all that. 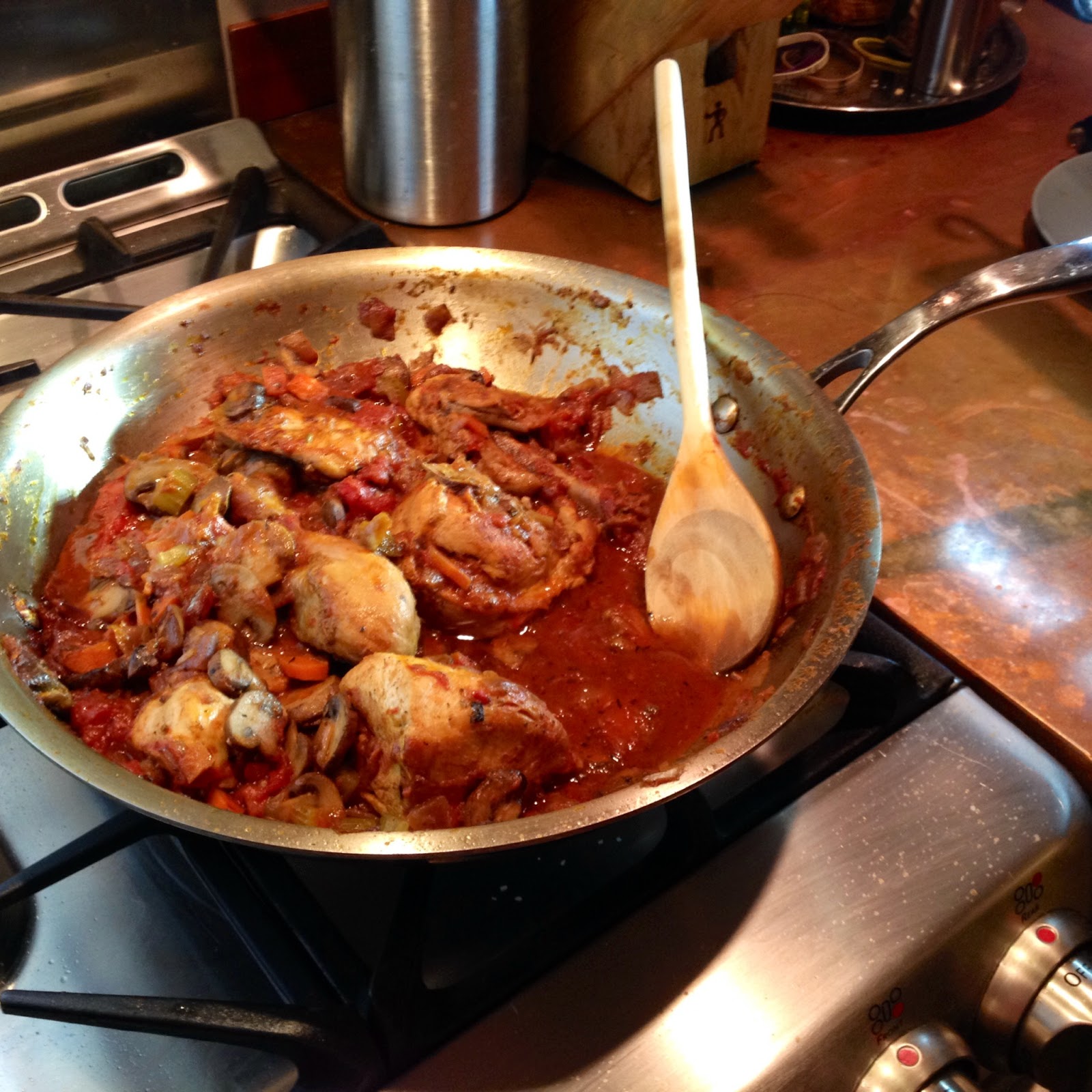 This is the first dish I learned to cook on my own, if memory serves me (which clearly it doesn't). I had a book about crafts and domestic stuff (sewing, knitting, cooking) when I was a kid. The illustration of the chicken cacciatore in this book stuck with me -- looked so delicious. I totally forgot about this concoction until just this week, when it suddenly became a craving. It's an easy dish, and satisfying. Serve with polenta, perhaps, or with some whole-wheat pasta alongside.

1. Cut whole chicken into pieces, if using (legs, thighs, wings, and breasts, with each breast cut crosswise into half; save the rest for stock). Pat the chicken pieces dry with paper towels and season with salt and pepper.

2. Heat a large, deep skillet over medium-high heat. When hot, add 1.5 TB olive oil. Brown chicken pieces in the pan, turning so all sides get golden -- you'll want to do this in two batches, adjusting the heat so that the chicken browns but doesn't scorch -- and remove to a plate.

3. In the same pan, add the cremini mushrooms and another generous pinch of salt. Sauté until the mushrooms release their liquid and allow that liquid to cook off. The mushrooms should be soft and caramelized. Remove to a bowl.

4. To the same pan, add 1 TB olive oil. When hot, Add onions, carrots, celery, minced garlic, and a healthy pinch of salt, and sauté until soft and starting to caramelize, about 10 minutes. Add the oregano, thyme, fennel seeds, and bay leaf, and sauté for a minute to release the flavors. Add the white wine, stirring and scraping up the bits stuck to the bottom of the pan with a wooden spoon. When the wine has mostly bubbled away, add the tomatoes, mashing them with the back of your spoon to break them up. Season with salt and pepper, and add the chicken pieces back into the skillet, spooning sauce over. Turn the heat to medium-low, cover, and allow to simmer for 20 minutes. Check the skillet occasionally as it cooks -- turn the chicken pieces to make sure they cook evenly.