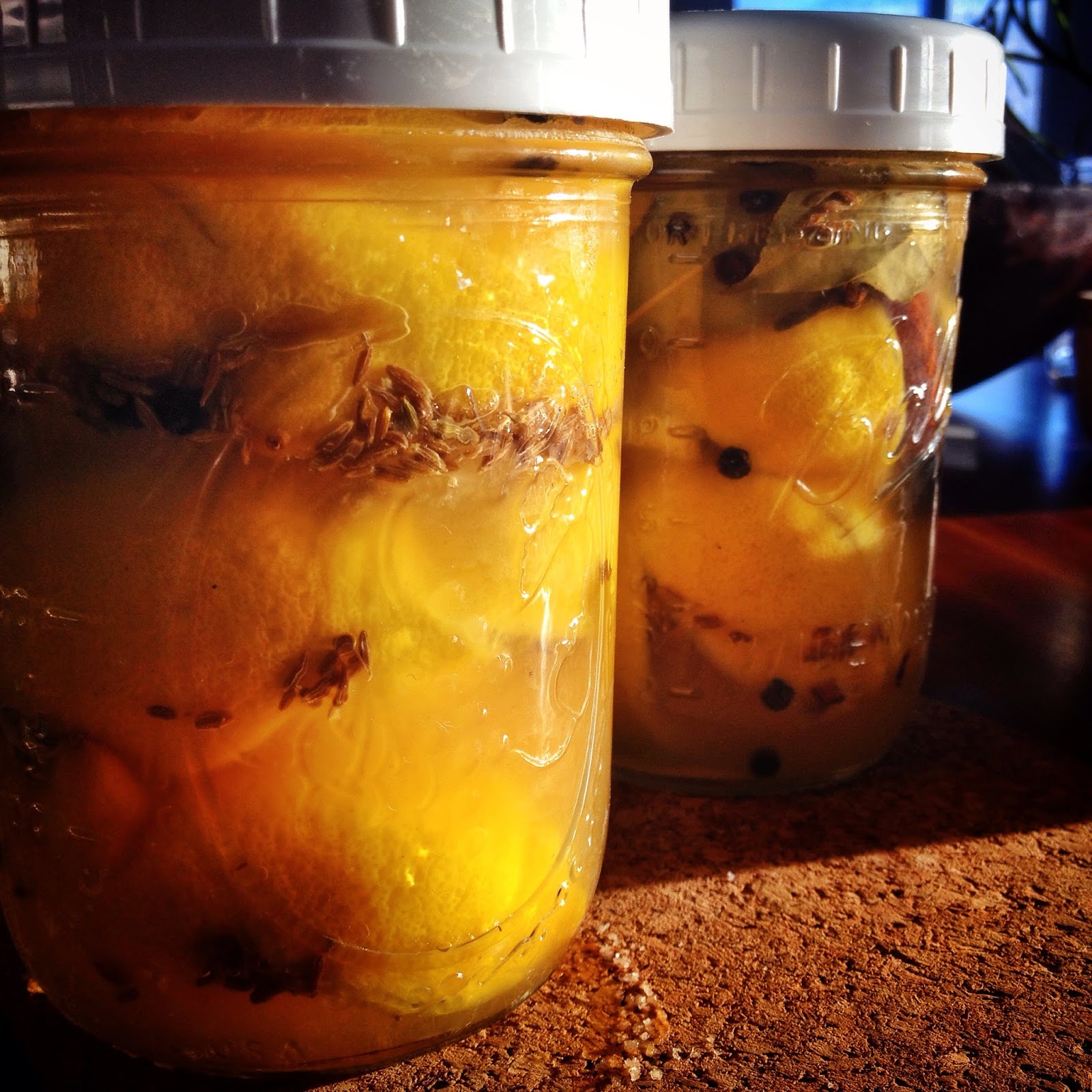 When I first tasted preserved lemons -- probably in Paris, probably in some sort of North African restaurant -- I thought I had eaten something very, very wrong: salty, astringent, bitter, and with an intensely concentrated citrus aroma. But at the same time, off -- the flavor seemed a bit resinous, a taste I associated more with cleaning supplies than with food.

Not a real recommendation, is it?

The thing is, I couldn't stop thinking about that flavor, and how wrong it felt in my mouth but at the same time how much I seemed to crave it afterwards. So eventually I found a Middle Eastern grocery and bought a jar of them -- I think I must have been living in Berkeley by this time -- and began to experiment.


The early experiments were slightly disastrous -- I couldn't quite figure out what one was supposed to do with these brownish, golf ball-sized pickled lemons, or even how one was supposed to use them. It was only after a few less-than-stellar attempts that I realized you have to discard the flesh and only use the peel, and that you should rinse it first. But as I became a little more familiar with the flavor I started throwing it into all sorts of dishes, appreciating the unexpected brightness and bite of bitter saltiness that it would add to otherwise anodyne ingredients.

I don't remember what inspired me to preserve my own lemons. It probably had as much to do with the aesthetics as anything else: the pleasure of seeing the sun hit jars filled with summer yellow orbs sitting on my counter, a defiance of what has been an endlessly long, depressingly overcast winter. The method is almost stupidly simple, so simple I was convinced it wouldn't work, but it seems to have turned out just fine. The lemons have been curing for about a month, and their skins are now soft from their brine cure, but because they've brined in their own juice they are not brown and dull like their commercial counterparts (at least not at this stage) -- they are intensely hued and gorgeous.

As you make subsequent batches, you can use the leftover brine from your finished jar of preserved lemons to top off your new jars.

1. Wash a 1 quart mason jar thoroughly in very hot water. (I washed mine in the hot cycle of my dishwasher.) Thoroughly scrub the lemons.

2. Prepare 6 of the lemons: leaving 1/2" at the top ("nipple" end) of the lemon intact, make two vertical cuts through the bottom. You'll essentially have a lemon that's been quartered except for the intact part at the top. (Go on to the next step; prepare additional lemons if you have room in the jar.)

3. Place a tablespoon of salt in the bottom of the jar. Take each lemon and stuff it with about a tablespoon of salt, reshaping it into a lemon shape. Put each lemon into the jar, layering the spices as you go. As the jar fills, push the lemons down to make room for more (you'll have to really squash them). When the jar is filled, add the rest of the salt. Squeeze the remaining lemons, and add as much lemon juice as necessary to cover the contents of the jar. Put on the lid.

4. Place the jar in a warm, dark place and let it cure for 30 days. Shake the jar every day to redistribute the salt and juices. When you're ready to use the lemons, make sure you remove them with a clean fork so as to keep the jar sterile. Use within about 3 months. 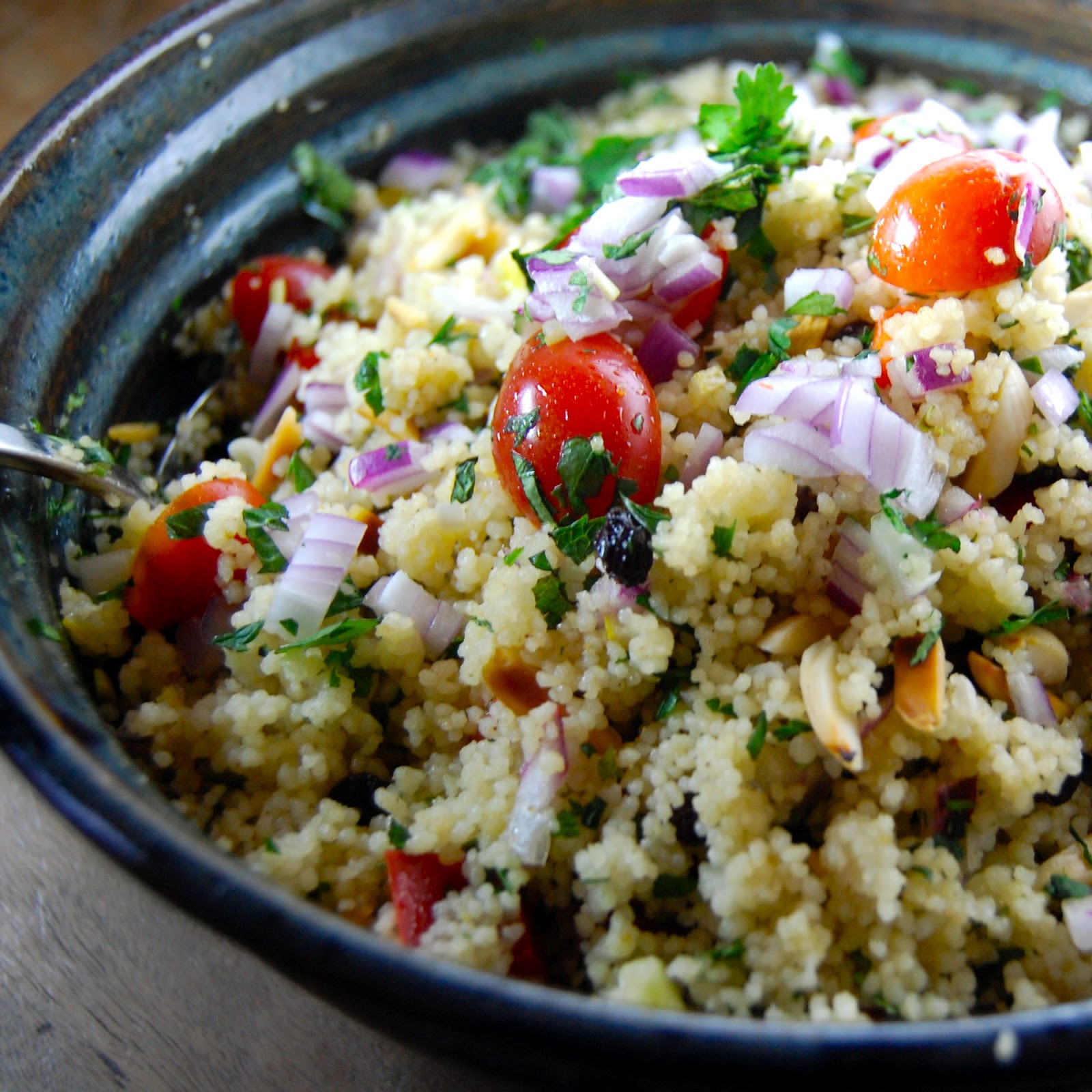 1. In a small saucepan, bring 1.5 c water to a boil. Add a large pinch of salt and stir in the couscous and currants, mixing to moisten the grains. Turn off the heat and cover; let sit for 10 minutes. Remove the cover and fluff with a fork, breaking up as many lumps as possible. Allow to come to room temperature.

2. In a small frying pan, toast almonds over medium heat until golden.

3. In a medium bowl, combine onion, tomatoes, red pepper, preserved lemon, and herbs. Add the couscous and almonds, gently combining the ingredients and breaking up as many couscous clumps as you can.

4. In a small bowl, mix together lemon juice, olive oil, and cumin, along with a hefty pinch of salt. Pour over the couscous salad and thoroughly mix. Taste for salt. Serve at room temperature.