The Crab Curry Test, or Cooking for Cowboys 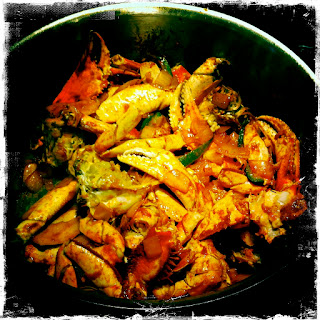 My dad is a cowboy and an imp. These are the two things that are perhaps most surprising about him, especially because it's not that often that you meet an East Indian cowboy, even in Alberta. (My uncle, who was cast as the Indian Marlboro Man in a 1970s ad campaign and appeared on billboards and in magazines, was probably India's only cowboy, so maybe it's got some family connection.) When Dad was in medical school in India, he styled himself as a matinee idol, complete with ascot and blindingly white smile; when he arrived in Canada after a stint in England, he was a mod; when he moved his new family to Flin Flon, near the Arctic Circle, he learned how to skate and snowmobile and ice fish and cross-country ski; and then, when we moved to Southern Alberta, he became a cowboy. It was called "assimilation," at least by him.


Being a cowboy entailed assembling an impressive collection of boots which he would wear to the operating room every day, along with his cowboy shirts and bolo ties; he had ostrich skin and alligator skin and a variety of embroidered and leather ones, and his friends would give him appropriate belt buckles and boot jacks and other accoutrements to complete his haberdashery. He learned to play guitar, and would make us learn the words to every country song ever made -- the complete "Red-Headed Stranger" album by Willie Nelson, which I have only now come to appreciate as the musical masterpiece it is, the Hank Williams (Sr.) songbook, and a variety of ridiculously hilarious tunes that he would sing with a broad grin while all us girls protested ("Put another log on the fire/Cook me up some bacon and some beans/Go out to the car and change the tire/Then come and tell me why you're leaving me." And no, I didn't have to look up the lyrics; they are burned into my memory.) We moved out to the middle of farm land, surrounded by wheat fields and coulees and not much else, and he was always the first person in the neighborhood to propose riding off-road down to the river bottom with kids and dogs hanging out of the back of the pickups (we got stuck in the middle of the river more than once in our lifetimes), or to help out when something happened with a horse across the way. He went hunting and bagged geese and deer. He became a fisherman. When he was working as a doctor he refused to play golf because he'd have to spend his time with other doctors; he'd rather burn brush in the burn barrel and shoot shit with the blowhard neighbor. Much more amusing.


He was going to be more good ol' boy than the good ol' boys. They always thought they were having the joke on him, his friends from the subdivision, getting the fun-loving brown guy with the Indian accent to do the craziest things in the name of being a good sport, but they didn't notice the smirk on his face as he played along, and they seemed unaware that if they were getting him stuck in the river, they were stuck there right alongside him. I think that my dad was most amused by what happened when you played the naif. He didn't mind being underestimated. I have a little of that in me, too, but not enough.

In addition to the fun-loving and adventurous side, Dad also had a mercurial one; his temper was terrifying to us as kids. Things broke. Lots. Mostly his pager -- the calls from the E.R. would come in at the most inconvenient times. I say "was" only because he's not really like that any more. A brush with ill-health in his fifties convinced him that he had to transform himself from a type A to a type B, and, along with his switch to pescetarianism after years of being a meat-lover, he did it by sheer force of will. I'm not sure that actually makes him type B, but at least the electronics are safe now.

He raised us tough. When I got my tonsils out at age fourteen, he told the ward nurses to cut off the Tylenol after day two of recovery so I wouldn't get soft; when I broke off my two front teeth (which then plunged through my lower lip) falling off my bike a few months later, he refused my sister's wailing demands that he take me to the emergency room immediately because he was busy killing a rattlesnake in the backyard. (I was mad afterwards because he refused to give me the rattler's tail as a souvenir.) He taught me how to frame out a basement and install a drop ceiling; I learned how to gut a trout and keep it cool in the lake during our 12 hr fishing trips; I reeled in salmon off the BC coast; I had to help dig out gardens and spread gravel and do all sorts of things that would help him feel like I wouldn't be dependent on any man when I grew up. I think he wanted a son; he styled me as the closest thing to that as he could, and only begrudgingly tolerated the fact that I was as far from a tom-boy as you could get.

So, when my sister and I finally introduced our boyfriends to him we were both terrified. Terrified enough that we only ever did it once apiece. We had no idea how he would react, especially to a couple of white guys. We laughed, years later, about the fact that we both married versions of him, even though our choices couldn't have been more different. My sister's guy was a farm boy, and a hunter, a hockey player, a jock, and a scientist; the opposite of head-in-clouds.

Dad was determined to demonstrate his hospitality and be welcoming; he didn't want to be some overbearing father protecting his helpless daughters. But, as was often the case, his hospitality came with an affectionate tweak. Sometimes I think this kind of generosity is specific to the colonial world, in which people had to balance their deeply ingrained notions of hospitality with their slight incredulity that these English bozos were actually ruling them; they would make their most special curries and watch in almost completely genuine horror and concern as their guests' pink faces turned red and broke out into desperate sweats. When, after we were all married, my parents took their new sons-in-law to India to introduce them to our family there, my (male) cousins in Bangalore took us out for a series of meals that increased in elaborateness and Scoville rating. They were pulling out all the stops, and the two newcomers had to play along. My brother-in-law usually figured out the game first, and allowed himself to be mocked for bowing out early on of the succession of fiery seafood dishes, alarmingly red and seductively aromatic; they could question his manhood, after so many Kingfisher beers, but he still had about 8 inches and 50 pounds on each of them and would probably whip them on the golf course the next day, so I think he was okay with it. My ex wasn't so smart, or at least was more stubborn. Chili hangovers are worse than whiskey hangovers, from a certain angle.

So, my dad. When faced with these two events -- the introduction of both of his daughters' boyfriends -- my dad strategized. He would make his favorite dish, one that both of us daughters loved, and that we knew was a special occasion-type entrée: his famous Malabar-style crab curry. Of course, when I sat down to dinner with my ex nervous beside me, I knew exactly what he had done. The dish is unbelievably delicious but -- and this is a huge but -- extremely difficult to eat for people raised on roast beef and skinless boneless chicken breasts. You must pull the crab pieces out of the pot with your fingers, crack them with your teeth, and suck out the meat, all the while the juices running down your arm. And it was hot. Really, gloriously, mouth-burningly, hallucinatingly hot.

My dad sat, with that damned impish grin, explaining to my ex more than once over the course of this meal that there was an enzyme in crab that lowered the surface tension of water, which is why crab is so drippy; I sat seething that he was putting my boyfriend through such a test. And it was a test: unlike a lot of Indian patriarchs, Dad had no particular desire for us to marry Indian guys, but whoever we married had damned well be able to negotiate our family, his daughters, and life in general. Ergo, they had damned well be able to negotiate crab curry. They better be able to get their hands dirty. They better be able to appreciate the multiple pleasures of this moment of gluttony. And they better like juice dripping down their chins.

Both guys passed the test, for better or worse. There is pretty much nothing that I love better than his crab curry, still. 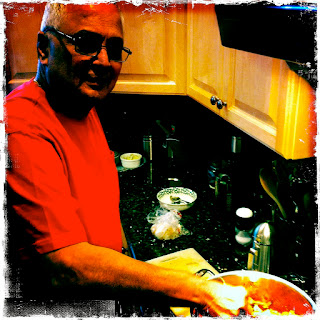 1. In a large pot, soften (but don't brown) 1 large onion, chopped; 10 smashed garlic cloves; a 2" knob of ginger, peeled and sliced thin; and 1 whole jalapeno cut into julienne strips (or an equivalent amount of a hotter chili, like serrano, to your taste). Add 1 TB bafat powder (see below) and 1 TB paprika, along with salt.

2. Add 2 crabs, which you've cleaned and cut up (see below), or an equivalent amount of crab legs; stir to combine with the masala. Add about 1 c water and let the mix boil for about 20 minutes. Add 2 TB of red wine vinegar to the pot, along with the "crab butter" that you've reserved from cleaning the crab. Turn off the heat and let the mix steep (if you have time) for an hour or so, or even overnight. Serve with basmati rice and a bowl for the shells.

This spice mix is essential for Manglorean cooking. It's hot. You can use it to make all sorts of things, including Seyal Shrimp (use instead of the spice powders indicated in the recipe) and other curries. This will make more than you need for the crab curry.

Take 1 oz dried red chilies (chilies de arbol, which are long and thin and readily available at any grocery with a decently stocked Latin section, or the longish, thinnish red chilies that you find at the Indian grocery), and grind to a fine powder in your spice mill along with 1 oz coriander seeds, 1 TB cumin seeds, 1 TB turmeric powder, and 2 TB poppy seeds.

How to Clean a Crab 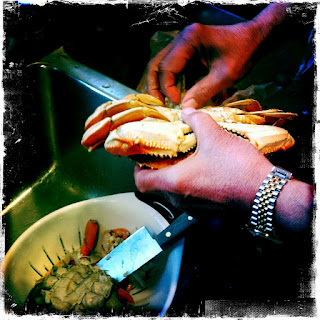 This recipe uses whole Dungeness crabs that have been steamed to death; if you've got live ones, you're on your own in the killing department. This is how you turn them into edible bits once they are, in fact, dead.

Place crab on cutting board, belly side up. Pull off the triangular-shaped belly flap, also called an "apron." Tuck your thumb between the body and shell at the rear of the crab and pull apart, so that the shell comes free and you've got the body in one hand. Remove the spongy gills and small paddles from the crab body and discard; cut the body into four pieces. Twist off the claws and legs from the shell. Scoop out the crab meat and roe ("crab butter") from the inside of the shell and reserve.

Or you could get your fishmonger to do this. Make sure he gives you the crab butter.
Email Post
Labels: Alberta crab curry Indian cuisine main dish non-vegetarian seafood