My Dinner with Habermas 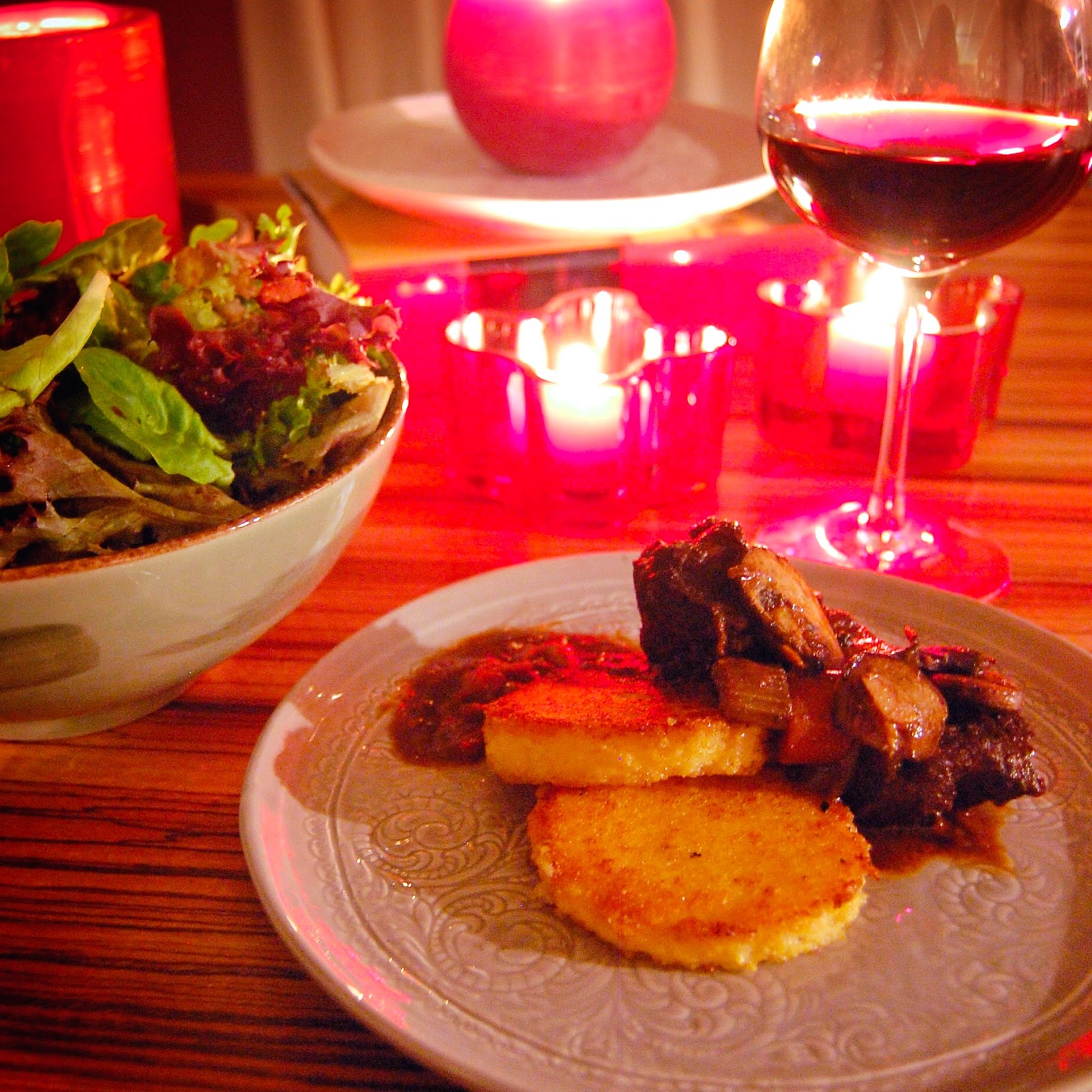 When I was in grad school, I worked with a very eccentric and brilliant sociology professor who spoke by turns in a rich baritone and a tremulous high pitch; he always had something interesting to say.

He invited Jürgen Habermas to lecture in New York, he of the public sphere and theory of communicative action et cetera, et cetera, et cetera. If you are reading this and have no idea who Habermas is, not to worry -- I barely knew anything about what he had written at that point, though I knew, from way he was spoken of by people who knew better, that he was someone who had done game-changing work in political theory. Someone that I should have known, in any case.


Richard, the sociology professor, decided that he would throw a dinner party in honor of Habermas; in addition to a tableful of eminent scholars (I remember Tony Judt was there, and Susan Sontag) my ex and I were invited. I suspected -- hoped -- we would be relegated to the children's table. Instead, when we arrived, we were seated on either side of the guest of honor; our host thought the scholar would be charmed by our youth. We were feeling less charming than intimidated. My ex immediately turned to the person to his left and remained in deep conversation all night, the coward. And so I was left to entertain Habermas.

Habermas has a deep and uncorrected cleft palate, and between that and his heavy German accent I couldn't understand close to seventy percent of what he said; of what I could understand, I really didn't understand, if you know what I mean. The conversation was stilted at first -- he didn't know much about art history, so his attempts to engage me were clumsy but very kind -- and I was too aware of how little I knew to feel comfortable. But as the wine flowed, it became easier. Perhaps (and I blush when I say this), a little too easy. I became fearless in the most ridiculous possible way: I started debating Quebec nationalism with him, and talked about Indian communalism as if I knew anything about anything, and not realizing he knew, had written about, all of these subjects. He egged me on, of course; the twinkle in his eye, which I read as deep interest in what I had to say, was more likely barely suppressed laughter. At least I made him laugh?

After dinner -- and really, in a complete failure of memory, I have no recollection of what we ate, which is all the more sad because our host was an excellent cook -- Richard asked about his guest's experience of World War II, living as a young boy in Germany. The table got silent, all eyes turned to Habermas. He started talking. At the distance of almost twenty years, this is what I remember him saying:


My father was very right-wing; he had a position in the bureaucracy and he was a supporter of the Nazi Party. My mother was even further to the right; she wanted the Kaiser back. I think that's part of the reason I fell in love with my wife -- here he nodded to the woman who had hardly spoken during dinner, sitting across the table from him --  because her father was part of a German resistance. Her family was going to deliver me from mine.

I was a child, nine years old. All my friends were joining the Hitler Youth, and of course I wanted to do all the things my friends were doing. My father also wanted me to join so he could show our devotion to the Reich. I went to the meeting, and I was turned away. In the Nazi manuals, cleft palates were considered a degenerate quality, an affront to the ideal Aryanism. My father intervened, but they remained firm. Nothing he said, no strings he tried to pull, worked. I was not allowed to join my friends. I was so upset. I remember crying.

After the war, we saw the images of the camps being liberated and we realized that we'd been living in a fantasy world instead of the nightmare Germany actually was. My eyes opened. I was a teenager by then and felt betrayed by my father and my country. I couldn't trust anyone. I found a Communist bookstore and read everything I could find on what had happened in the past years. The scales fell from my eyes.

I was so ashamed. Ashamed of wanting to be part of the Hitler Youth. The only thing that saved me from total moral decrepitude was my deformity. So that's why I never got it fixed. It was the only reason that I was kept innocent despite myself.

We all sat there, stunned, as if we had heard something momentous, and historical, and important. Which of course we had.

As I said, I don't remember what we ate. I do remember another dinner with another scholar -- this time a woman who is regularly called formidable and who has a wide mouth and a leonine manner and a terrifyingly penetrating gaze and a fierce and uncompromising intelligence. Though our paths crossed frequently, I studiously avoided getting too close so as not to see her bad side, which was legend; I prefered to admire her -- how could one not love her brain? -- from afar. She was fond enough of me, though, and if I ever bumped into her after she had had a drink or two she would drape her arm around me and pull me close and start dissing other art historians, asking me to confirm her contempt. I catered this particular dinner for the hostess (who was my dissertation advisor). The leonine scholar's husband raved about my cooking and asked for seconds and relished it to an almost untoward degree. Slightly miffed, she leaned over to me, grabbing my arm with one hand in a firm grip, and raising a glass with another. "To competition!" she toasted, insisting that I raise my glass alongside hers while she glared at her teddy bear of a husband for the briefest moment. I blanched and reddened, probably at the same time. 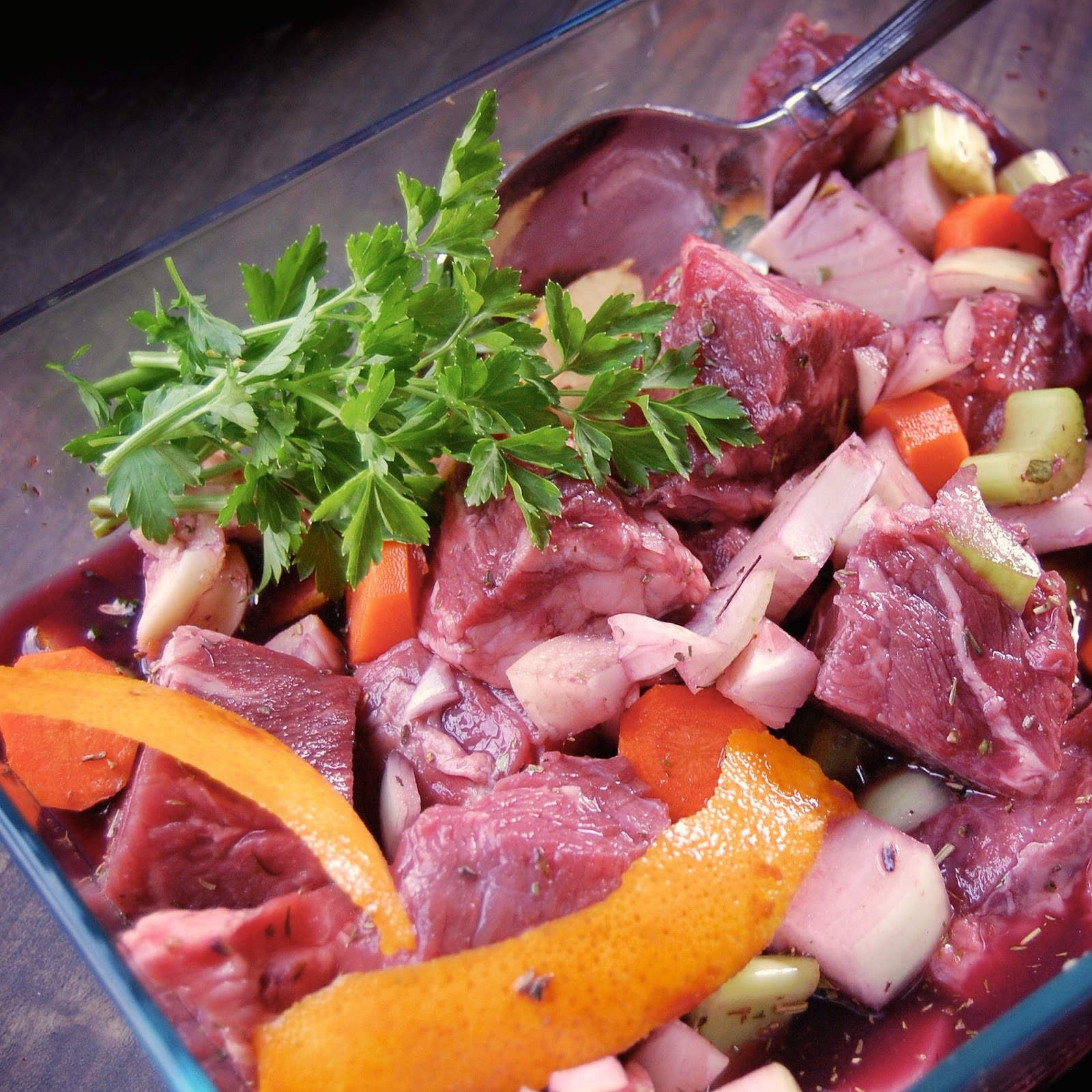 A Provençal stew, from back when Provence was Provence. Rich, but not greasy.

1. A day before cooking, combine beef, carrots, onions, garlic, parsley sprigs, celery, bay leaves, thyme, Cognac, pepper and clove bundle, 1 TB olive oil, and the bottle of wine in a large glass bowl. Mix up, and refrigerate for 24 hours, mixing once or twice.

2. The next day, let the meat and vegetables return to room temperature. With tongs or a slotted spoon, remove the meat and pat the pieces on paper towels to dry. Strain the liquid into a bowl, reserving the vegetables and herbs.

3. In a large, heavy casserole (a Le Creuset is great), heat 2 TB each butter and olive oil over medium-high heat. Add the meat, which you've sprinkled liberally with salt and pepper, in batches, and brown well. Remove to a plate.

4. Add the reserved vegetables to the pot with a good pinch of salt and sauté until browned. Add tomato paste, and mix until slightly caramelized. Add the reserved wine and browned meat and bring to a lively simmer; turn down the heat to medium-low and simmer, skimming any foam that rises to the surface, until the meat is very tender -- probably 1.5 hrs.

5. While the stew is cooking, sauté mushrooms in the remaining tablespoon of butter. When the stew is cooked, adjust for salt and pepper, and add the mushrooms and the grated zest and juice of the orange. Discard the cheesecloth bag of cloves and peppercorns.

6. For the polenta: start this once you put the stew on simmer. Make two batches of polenta. When cooked, spread out on a cookie sheet and smooth as well as you can on top; it can be as thick as you like, but not less than ½”. Cover loosely with plastic wrap, and refrigerate for about until firm, 20-30 minutes (you can make this ahead if you’d like and refrigerate until required). Cut into squares (8 pieces) or discs and sauté in batches in 1 TB olive oil on a non-stick skillet over medium-high heat. Don't try to flip the polenta squares until a good crust has formed. Brown on both sides. Serve alongside the stew, garnished with chopped parsley.
Email Post
Labels: beef daube cleft palate fried polenta Hitler Youth Jürgen Habermas main dish meat non-vegetarian recipe

Carol Bridges said…
I think your dissertation advisor certainly loved the meal you prepared for them. I think she can help you with your phd dissertation if you always treat her with your delicious food. Anyway, It’s good that you posted the recipe for us to try it out.
July 30, 2013 at 3:06 AM