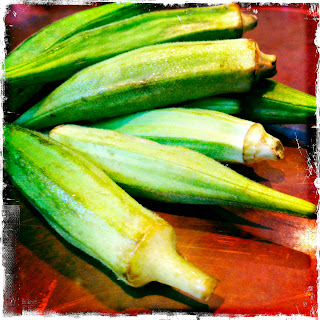 I really love vegetables. Honest. Except for a few. And then there are the allergies; I'm allergic to a lot of raw vegetables, but I can pretty much eat anything cooked. Except for avocado, but that's a fruit. So. Yeah.

I feel guilty about the vegetables I just don't like, though. I mean, what have they ever done to be unlikeable? Nothing. There's no reason I don't like them except that I don't. And so I feel ungenerous towards them. Like I've done them wrong. Like my antipathy is simply a lack of understanding. If I just got to know them better, I would understand their charms.


What this guilt results in is that I am far more tolerant of vegetables that I don't like than I am with, say, innocent young children that I don't like. Or books that disappoint me. Or overwrought romantic gestures and the people who offer them. Or just about anything. I am kind to vegetables, even the ones that make me gag a little.

I've learned to love some of them, over time. Broccoli, for example, which I only learned to appreciate when it turned out that it was my toddler's favorite green thing; when I finally ate it simply steamed (instead of sautéed with onion and browned garlic as it was always served in my house growing up), I could appreciate the grassy sweetness of it. And kale, also inspired by said kid, grew on me with its emerald hue and meaty bite and slight bitterness. Because I belong to a local CSA (Community Supported Agriculture) farm, I have been encouraged -- nay, coerced! -- to try a lot of things that I wouldn't voluntarily eat, because when you eat locally and seasonally, there are times when, really, rutabagas are your only choice. But eggplant, with it's often spongy texture, or okra's sliminess, or the slight sulfuric odor an starchiness of whole Brussels sprouts -- these were more of a challenge for me. Here are a few recipes that I consider redemptive, that turned things that I hate into things that I love. I feel like a good person every time I eat them. 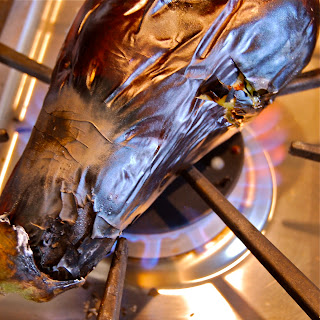 1. First, roast a large eggplant: it's most fun to do this on a grill (extra chef points if it's a charcoal grill) by simply putting the eggplant over the flame and letting it blacken and roast. It's done when it's really soft and charred. The alternative is to put it on a baking sheet in a very hot oven (500 degrees), turning every 15 minutes until it's soft and blackened. I usually do it directly over the gas flame (right); it's messier, but gets a nice smoky flavor. When it's done (it'll take about 45 minutes in the oven, less over a grill or flame), wait for it to cool until you can handle it, and peel off the skin so you're left with the pulp. Mash with a fork.

2. In a sauté pan, put 1 TB canola oil and heat with 1/2 tsp cumin seeds. When fragrant, add 1 chopped onion. When the onions are evenly golden brown, add 1 tsp minced garlic, up to 2 green chilies, chopped, and 1 tsp grated ginger; after a minute, add 2 chopped tomatoes (seeded and -- if you're energetic -- peeled), along with 1 tsp salt. When this is well cooked and the oil is separating from the tomatoes, add 2 tsp cumin powder, 2 tsp coriander powder, 1/2 tsp turmeric, and 1/2 tsp red chili powder. Sauté for a minute or two until the spices have been toasted in the oil, then add 1/2 c water and let cook until the spices are well-incorporated.

3. Add the eggplant pulp and a good handful of chopped cilantro. Adjust for salt, and keep cooking on low for about 10 minutes or so until the eggplant picks up the flavor of the spices.

4. Squeeze a couple of teaspoons of lime or lemon juice on top, and serve hot. 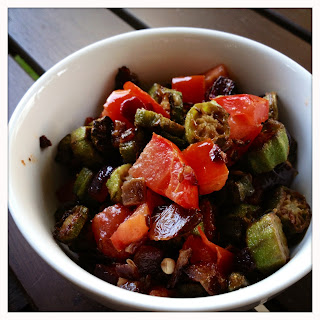 In a non-stick frying pan, heat 2 TB canola oil with 1 tsp cumin seeds over medium high heat. When the cumin seeds become fragrant and start to brown, add to the pan 1/2 lb fresh okra, sliced crosswise into 1/4" thick coins. (Try to choose a pan that will allow the okra to fit in one layer.) Allow the okra to cook, undisturbed, for a few minutes. Toss the okra in the pan (cool chef's flip move or spoon, doesn't matter), and allow the okra to cook, undisturbed, for a few more minutes. Continue this for another 5 minutes or so until the okra is starting to caramelize and brown. Now add 1/3 c minced red onion, and 1 onion, finely chopped, and sauté the mixture, stirring every minute or two, until the onion is softened. Now add 1/2 tsp salt, 1.5 tsp ground coriander, and one firm plum tomato, diced. Toss and flip the mixture until the okra is nicely browned. Check for salt, and serve hot.

1. Remove the outer leaves and trim the ends off a pint container of Brussels sprouts. Slice them thinly (I do this with the shredding disc of my food processor or with a handheld mandoline, but a knife works just fine). Soak in a bowl of cold water with 1 tsp of salt added for 15 minutes; drain and rinse.

2. Melt 2 TB butter in a skillet; let cook over medium heat until it takes on a brownish color and nutty aroma. Add 1 large shallot, chopped, and sauté until softened. Add the sprouts and a good pinch of salt and a few grinds of pepper and sauté till slightly wilted. Add 1/4 c water or chicken broth and let cook over medium high heat until tender (you may have to add a bit more liquid until the sprouts are cooked to your liking; just make sure you only add enough that the leaves are mostened in the end without any extra water in the pan). Throw in 1/4 c chopped, toasted walnuts or hazelnuts and 2 TB fresh-squeezed lemon juice. Adjust for salt, and serve hot.
Email Post
Labels: baingan bharta Brussels sprouts eggplant Indian food okra recipes side dish vegetables vegetarian

Unknown said…
How many times have you wondered if there was an easier way to get cash back on your purchases? Maybe you are wondering how you would get all the things done on your daily to-do list, maybe that’s why you’re reading this article. Fortunately, there are a few ways to make this happen and make it easy for you to get cash back near me on things you already buy, such as groceries and gas.
Cash backnear me
March 11, 2022 at 1:24 AM

crystal rings said…
One of the best ways to turn a simple outfit into an elegant ensemble is by wearing a bracelet in complementing colors or one that complements your outfit's pattern or print. You can buy affordable bracelets, like the stainless steel bracelet featured here, on Internet stores such as ours, which carry all kinds of ladies' adornments like rings, jewelry, beguile wristbands, silver arm bands, authentic silver arm bands and gold cross accessories.