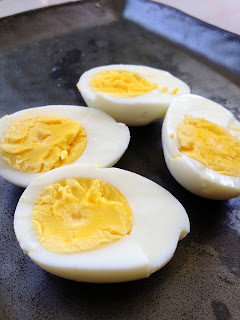 There is nothing more satisfying, culinarily speaking, than making a perfect hard-boiled egg.

I remember my mother (an excellent cook) telling me that when she married my dad she didn't know how to boil an egg; you might remember your moms saying the same thing. It was something you said if you were a certain generation of married woman. It's a task that represents the most basic domestic skill, a seeming no-brainer, and the inability to perform it marks the unpreparedness of women for their duties as housewives and mothers. "Four out of ten girls are so ignorant about cooking they can't even boil an egg," cries a hysterical article in the Daily Mail about 8 to 15 year olds' lack of training by their mothers' sides. As if egg-boiling were the only thing that young women bring into a relationship, or as if it were the most basic foundation on which a family is built, or as if were the only food that families ate.


But really, what could be more difficult than boiling an egg? The whole thing is a mystery. In every other kitchen situation, we adjust ourselves to whatever we're cooking, sometimes completely unconsciously. We sense the signs that something is ready -- the smell, the color, the sound it makes in the pan -- and we leave it go a minute more or a minute less because we know that not all chicken legs or carrots or chick peas are made alike; some are done faster, some slower, depending on a million factors. But when it comes to boiling eggs, there's no signal, no sign, no clue. They don't smell differently when they've boiled enough, the water doesn't change color, they don't float to the surface. They remain inscrutable, looking exactly as they did before you started cooking them, their shells hiding all their secrets.

We cook blindly when we boil eggs, and that's probably why there are so many methods for achieving success -- I don't think it's an exaggeration to say that there are probably as many methods as there are cookbooks, give or take a few hundred thousand (to account for all those cooks who have yet to write their cookbooks). Everyone does it differently, and treats their recipe as a sort of magical formula from which they cannot deviate even an iota because the formula works more often than it doesn't work, and that's about as much as one can hope for. And of course the stakes are high, because there's nothing worse than a badly-boiled egg: undercooked and they're useless, more or less -- once peeled you can't really put them back on the stove for some more cooking time -- while overcooked they're unappetizing, with that sulfurous odor, rubbery white, and grey ring around the yolk.

I've been trying to think of other things that require me to trust so completely in a formula or process, to cross my fingers and close my eyes and just do it, to give up any hope of tweaking or adapting one's plan if things go wrong along the way. The only thing I could come up with was pregnancy, although now thanks to medical imaging and intrauterine surgery for certain birth defects and all sorts of other new technologies a woman's belly is no longer opaque to the outside world the way it was in earlier times. Perhaps the actual experience of childbirth? I remember being in the delivery room, screaming that the anesthesiologist hadn't placed my epidural right (my thigh was numb but nothing else) and begging the other doctor to redo it or give me a caesarean because the pain of an unmedicated birth was something for which I hadn't prepared myself. The doctor furrowed his brow and gave me the deeply sympathetic look that a parent gives their young child who is just finding out that life isn't fair: "I'm so sorry, it's too late. You're in active labor. All we can do now is wait for the baby to come out. There's no stopping this train." 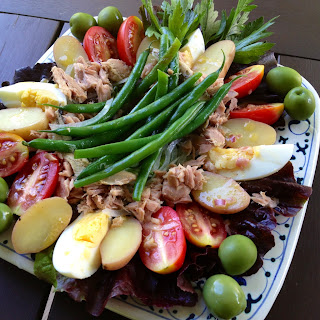 I have a motto, a mantra, maybe: "No decision is irreversible." It's a reminder that as bad as things get, you're never really trapped -- it's a comfort that keeps me from being paralyzed from fear of doing the wrong thing, making the wrong choice. But of course there are a few decisions in your life that you can't unmake. That moment when you realize you can't stop your baby from being born. The moment you take those eggs off the stove. I wonder if those women who tell their life stories by saying that when they got married they even had to learn to boil an egg means something other than the fact that they had to learn the most basic cooking skills. Perhaps what they were saying, at a couple of generations removed from the idea that divorce was both possible and not the end of the world, is that they were jumping off a cliff by getting married. Making one of the few decisions they could make that was truly irreversible. Perhaps they're saying that for them marriage, like boiling an egg, was a leap of faith. You just set the timer and hope it turns out for the best.

They say that it's best to use old eggs for boiling, because they peel more cleanly. It's totally true, but since I get my eggs from the next door neighbor the ones in my fridge are usually super fresh. I just live with it, although if you peel them immediately after they've boiled and been plunged in ice water, it's somewhat easier to keep the smooth surface of the whites intact. Starting with room temperature eggs helps, too.

1. Take the eggs out of the fridge and allow them to come to room temperature. In a deep saucepan place as many eggs as you'd like -- but no more than can sit in a single layer on the bottom of the pot. (My 4 qt saucepan fits a dozen.) Cover the eggs with cool water; the water should cover the eggs by an inch.

2. Place the pot over medium heat and allow the eggs to come to a gentle boil, uncovered. Once the water has boiled for a minute, turn off the heat, cover, and let sit for 12 minutes.

3. Take the eggs out of the pot with a slotted spoon and place them into a bowl of ice water to stop the cooking. When they are cool to the touch, peel them and use now, or place them unpeeled in a bowl in the fridge for a week or so.

Here's a great opportunity to show off your artistic side: a salade composée, which means an arranged (vs. tossed) salad. I use the classic canned tuna instead of fresh; I've found some beautiful imported Italian and Spanish varieties in cans and jars, and it's worth spending a little more to get something a step up from Chicken of the Sea. Anchovies are traditional, but you can obviously leave them out. Coward.

Drink this with a perfectly cold rosé, Provençal-style.

2. Prepare the vegetables:
3. Prepare the dressing: Mince the shallot and place in a small bowl. Add the olive oil and a pinch of sea salt and let steep for 30 minutes or so. Now add the mayonnaise and mustard, along with another healthy pinch of salt and a grinding of fresh pepper. Whisk this together, and then add the vinegar, whisking as you add.

4. Arrange the salad: Line a platter with the lettuce. Arrange the vegetables, olives, anchovies, and halved eggs artfully on top of the lettuce. In the middle of the arrangement, place the tuna which you've flaked up with a fork. Drizzle about half the dressing overtop of the salad, and sprinkle with parsley. Serve with the rest of the dressing alongside for people to add as they wish.
Email Post
Labels: boiled eggs eggs main dish salad salade niçoise seafood

rechal said…
And it's easier to find true haricots verts at Fresh Market or Whole Foods, versus the cheap place I usually shop that is literally across the tracks. Also worth getting those delicious cured white anchovies -- boquerones (also at Fresh Market/Whole Foods) vs the canned ones. Totally different. And the adorable little potatoes as big as your -- I was going to say thumb, but they're a bit bigger, and as big as my big toe just doesn't sound appetizing.
November 27, 2017 at 10:59 PM