Whenever we flew to India when I was little -- 20-plus hour flights on big 747s with enough leg room that my sister and I could make beds at our parents' feet and bathrooms big enough that we would change into fresh outfits for our arrival at the airport -- my mom would make us look out the window as we were landing in Bombay. "See those lights?" she would say. "Your grandfather made those."

My maternal grandfather, my Nana -- a man who had died far before I was born, before my parents were married, even, and at much too young an age. He was a mythic figure to me, a benevolent face staring down from a picture draped with marigold and jasmine hanging on the wall of my grandmother's house. I'd heard all the stories from my mom, my aunts, my uncle: he insisted that all his daughters -- so many daughters! -- be fully educated through college in an era where this was expected only for sons; he arranged marriages for the older sisters before he died and was an excellent judge of character; he was stern and loving both, and my mom remembers vividly the times when he praised her because they were rare and meaningful; he was a curious and inventive man who anticipated the depletion of the ozone layer in the 1950s and sketched plans for an "Ozonizer" to replace it; he was an accomplished photographer; he co-founded a well-known company called Joy Ice Cream after Independence. My Ice Cream Grandfather. That's how I thought of him.


By the time I was around eight I had developed such an image of him in my mind that I insisted to my mom that I remembered meeting him when I was only one year old. My mom laughed and said it was impossible, but my description was so vivid -- the product, I think, of how his children had kept him alive in our imaginations.

My grandfather -- the man my grandmother lost when she was only 42, the father of her eleven children, the husband she was married to when she was only a child herself. The man that she loved. My grandmother would tell a story of playing in her village in Sindh when she was a young girl, only nine or so, and teasing a passing man in his twenties for being silly and serious and funny looking; she said she was so embarrassed later when she discovered that he was to be her husband. They were married only two years later, and had their first child only two years after that.

If their beginnings suggested the most traditional aspects of South Asian culture, their life together was much less so. He moved them to Bombay to practice his profession; he had trained as both a mechanical and electrical engineer, a rare feat. When the Indian nation was born in in 1947 through an act of amputation -- Partition -- my grandparents housed relatives who fled their native soil because it was now made part of Pakistan. So many Sindhis came to Bombay, sleeping on their relatives' floors or setting up temporary shelters in refugee camps and eventually starting businesses servicing the other refugees; Sindhis have a special talent for business, so they say. My grandfather helped as many as he could. They crowded into my grandparents' two room flat, grabbing any available space among my mother's many siblings. Without a homeland, it was only through such generosities that a culture could continue. 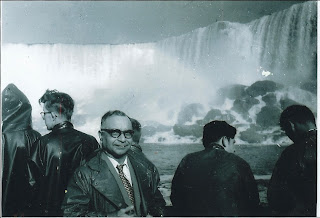 He went to work for a firm, AMA Limited, whose speciality was laying lights on airport runways, and he became one of the experts in this field in India. I suppose I was shocked when, in my 20s, my parents and sister and I flew into Hong Kong, and my mom made me once again look out the window to see the lights my grandfather had planted, this time on a runway that was almost terrifying in its relation to city and sea. Later, going through old photographs in my aunt's apartment, I found a picture he took of the Eiffel Tower, standing so that the spire loomed vertiginously above him. My grandfather. In Paris. In -- what -- maybe the 1940s? 1950s? I've always wondered what it must have felt like for him -- was he an oddity on the streets there, or were there enough travelers from the browner parts of the world that he wouldn't be an object of curiosity? I imagine him, short, elegant, dapper, almost regal, with big glasses and an intelligent gaze, soaking in the sights. I don't know if he laid the runway lights in Paris, too. I don't know why he was there, actually. He went to Germany. He went to Niagara Falls. It is still so unreal to me, knowing that he, an ordinary man -- brilliant, but hardly rich, from a part of the world that was at that moment divided from the west by more than mere geographical distance -- could have traveled so far.

My aunt Sheila was telling me about a dish that my grandmother used to make, one that became my cousin Ori's favorite: a curry with peas and macaroni. I laughed at the telling, thinking of my Sindhi grandmother who never left India until she was in her seventies having far earlier adopted this Italian staple in her kitchen. But when I researched I discovered that it is indeed a classic Sindhi dish, often made with mutton or lamb. One cookbook author explains its unlikeliness: "Minced meat is even consumed with macaroni, which sounds like an unlikely combination but is explained by the fact that Sindhis tended to travel abroad quite a lot on business and introduced their community back home to the pleasures of this particular pasta!"

I think of all those anonymous and distant relatives of mine, making the harrowing journey across a border drawn by British cynicism and religious hatred, and I think of my grandfather, an unlikely world traveler roaming Paris with his camera and building airports in the jet age, and all the travelers who came before and after him, and I smile at the strange and comforting and homey combination that ended up on my grandmother's table as a result. 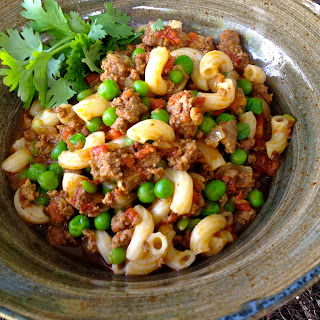 1. Boil the macaroni in plenty of salted water until just shy of al dente. Drain and reserve.

2. While the pasta is boiling, heat the canola oil and cumin seeds in a deep sauté pan. When the seeds are fragrant, add the onion and sauté until golden brown. Add the garlic and ginger and stir until you smell the aroma, and then add the coriander, cumin, turmeric, and chili powders and salt. Stir for a minute. Add the tomatoes and 1 c water and simmer at a lively clip until the tomatoes are broken down and the mixture is saucy and rich. If you'd like to add the garam masala, do so now.

3. If you are adding fresh peas, add another 1 c water and let them cook until tender. If you are adding frozen peas, add them directly to the pan with 1/2 c water and let them cook till warmed through. Add the pasta, along with 1/4 c water, and allow the pasta to get tender and absorb the sauce. (You may need to add another 1/4 c water if it's too dry.) You'll need to check for salt at this point; season as necessary. Serve hot, garnished with cilantro leaves.

VARIATION with minced lamb or beef (serves 5-6; pictured): In step 2, add 1 lb minced (ground) lamb or lean beef to the golden brown onions and fry until it loses its pink color; tip the pan and spoon off as much fat as possible before proceeding with the recipe. Increase the garam masala to 1 tsp. Let simmer for about 10-15 minutes until the meat is tender and proceed to step 3.
Email Post
Labels: grandfather Indian food keema mattar macaroni curry main dish mattar macaroni curry meat non-vegetarian travel vegetarian

bagerap said…
This brings back memories. Growing up in Southall, my experience is naturally with Punjabi food. And this fits the bill splendidly if you will allow for an alarmingly large portion of lamb mince to be included.