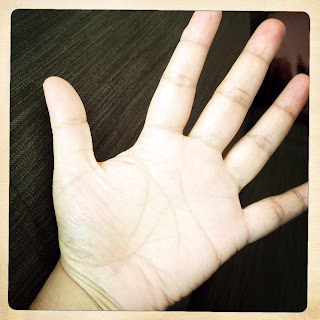 All my dreams lately have been about holding hands.

My dreams are generally quite bizarre, but also so directly related to my desires that I feel cheated sometimes -- why don't I get the strange layerings and morphings and revisions that make other people's dreams not simply strange but actually interesting? My ex -- my first lover, tall and lanky and thin and very pale -- used to tease me early on in our relationship because I had a dream that my father had bought me Arnold Schwarzenegger. "So: tanning salon and weightlifting? Okay, I'll try it, but not sure your dad will ever approve of me." No secondary revision, we used to say, when we were feeling particularly Freudian.


Nowadays they come more or less directly out of the pages of one of those dream analysis books: they seem to always involve dirty and overflowing toilets, missed flights, finding myself naked in public, etc. The standard repertoire.

But lately: holding hands. In my dreams I hold hands with my male friends, my female friends, my mother, my grandmother, my ex boyfriends, my ex husband, my enemies, my crushes, even Katie Couric.... I wake up hardly remembering what happened around this moment of contact -- not understanding, that is, why the holding hands part was so intense and consequent. I wake up troubled, not calm, the ghostly imprint of these conjured loved ones and hated ones and indifferent ones still on my warm palm. My vague memories suggest that I have been anxious about holding hands, that I'm scared that I'll be pushed away, but at the same time I'm surprised at the handholding, that it came out of nowhere, initiated by someone else. Push-pull.

When I met my ex on the first day of grad school he was married; we became friends. We were both so young, and I at least was an innocent -- I didn't even notice that our friendship was treading close to something else, something more dangerous, and I probably couldn't even have put a name on it, the feeling that was growing. We would hang out between classes and go to the museum across the street and sometimes sit in Central Park, talking about the stuff we were reading; he worked hard to make me laugh.

At some point, a bit over a year after we'd met, he told me that his marriage was over, that he was in love with me. There was so much shock at his actions -- how could someone so young be married and divorced already, in such short a life -- and also guilt at mine, thinking about those recent cross-town bus rides, after late evenings studying in the library, where we would stare in opposite directions as if we were strangers who just happened to be sitting next to each other on those blue plastic seats, while his hand creeped over to mine and clasped it tightly, fingers entwined and my thumb pressed down under the pressure of his. Our attention to the view out the window or the other people on the bus intensified in proportion to our willful denial of our handholding, and we always parted with a brusque, impersonal goodbye.

When I started dating after the divorce, I didn't know what to do with my hands. One man I went out with told me, on our second evening out, that he thought I was trying to mesmerize him at our first meeting by nervously playing with my thin gold bangles which I had slipped off my wrist and was flipping and shuffling like a deck of cards. I think he said it as a way to compliment me -- to tell me I had beautiful hands -- but I heard it as an accusation, as if he was claiming I had exercised some black magic or otherwise played unfairly to get him to find me attractive. Seducing with a display of graceful hands -- such dishonesty! I still remember the look of utter confusion on his face at my defensiveness, my sputtering denial that I had used my hands in any nefarious way. (There was no third date, surprise surprise, although there was a long friendship subsequent to this fiasco; we never held hands, although once he held my feet.)

I once went out -- just once -- with a chef. He came on so strong, and with such mansplainy overconfidence, that I had no idea how I was going to get through dinner. I spent much of the time leaning further and further away as he inched closer and closer to me in the booth at the restaurant. At some point he grabbed my left hand, and turned it to look first at the back of it and then at my palm; I waited for him to tell me that we were destined to be together or something equally cheesy. Instead, he rubbed his thumb over each of my fingertips and scolded me for how many scars there were -- he knew they must have come from cutting myself so many times with my chef's knife. He wasn't wrong, except for one (that one came from an axe). I told him, yes, I had cut myself more than once, and that my index finger had not so much feeling left at the tip as a result. He sat through the rest of the dinner, bloviating and desperately trying to impress me, with the tip of my index finger pressed between his thumb and forefinger, as if trying to will some feeling back into it. I hated the dinner, more so because I was forced to eat without use of that trapped appendage.

This is not the kind of handholding I dream about now -- fraught hands trying to suss out an emotional landscape under the guise of offering affection, or escape from an unwelcome grasp.

My grandmother's hand, shaped so much like my mother's now, but pale and crepey and soft; when I lived in India before grad school she would summon me to her house every night so I could sit next to her and hold her hand for a while. My daughter's hand, which I'm still surprised to find slipped into mine when we're walking down the street, warm and smooth and moist like bread dough. Maybe it's this kind of touch my dreams lead me to.

But that would be too easy, no? Dreams may be standard, but they're never cliché, they're never trite -- the one place in my life where I can escape that particular danger. It must be something else I seek. Or fear. Probably nothing to do with hands at all. 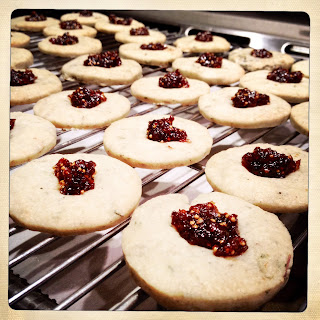 I've been invited to a Thanksgiving meal at the place of an epic foodie -- Frieda is not just an amazing cook, but is totally in-the-know and cutting-edge and all Brooklyn cool and such. She made a spreadsheet for people to sign up for things to bring, and included was "Fig and Blue Cheese Cookies." I thought it sounded intriguing, and set out to patch together a recipe. This is what I came up with -- they're essentially jam thumbprint cookies but all savory and buttery and salty with the sweet-tart fig jam to balance things out. You should make the jam even if you don't make the biscuits, because it's amazing on a cheese tray. I used French figs, which I found at Fairway (one of the great supermarkets in New York City), which are plump and moist, but you could use any kind of dried figs you like.

1. Roughly chop figs and place in a medium saucepan, along with the sugar, balsamic vinegar, water, salt, and pepper. Bring to a lively simmer, cover, and cook for 20 minutes on medium-low heat until the figs have absorbed a lot of the liquid and have gotten soft; the remaining liquid should be syrupy. Uncover the pot and simmer on medium for a few minutes if there seems to be too much liquid.

2. Transfer contents of the pot to a food processor and purée. Add the lemon juice and mix once more. Allow to come to room temperature. Transfer to a jar or container, and refrigerate for up to one week.

3. Preheat oven to 350º. In the bowl of a food processor, combine all ingredients and process until the dough just comes together into a ball. On a lightly-floured surface, knead the dough a few times until it's pulled together. Roll out until about 1/8-1/4" thick, and cut circles out with a small, round cookie cutter dipped in flour. (The one I used was about 1-3/4" in diameter.) Place rounds on a parchment-lined cookie sheet.

4. Make a thumbprint in each round. Add a heaped 1/4 tsp of the fig jam to each imprint. Bake until biscuits are golden on the bottom, about 12 minutes. Let cool on the cookie sheet for 10 minutes or so, then transfer to a wire rack. Cool completely so they'll stay crisp when you store them. Store in a container between sheets of waxed paper until ready to serve.
Email Post
Labels: appetizers blue cheese fig fig and blue cheese biscuits fig jam thyme biscuits vegetarian