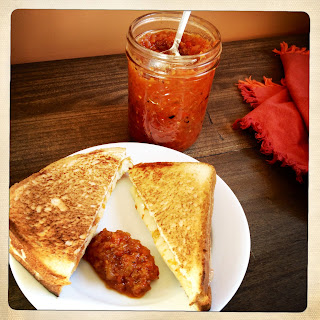 I went a bit crazy for a while, canning everything in sight at the end of summer when I could buy a bushel of tomatoes for $12 and when apples were falling off the trees. My daughter rolled her eyes when I returned from the CSA farm with ten pounds of red peppers, which took up a surprising amount of space in the car. I wanted to make ajvar -- a Baltic spread made with roasted red capsicums and sometimes eggplant, silky and unctuous -- but when I searched for recipes I was disappointed to find that all those Serbian aunties don't follow proper USDA standards for canning. I was too much of a coward to take the risk.

What I made instead was a roasted red pepper relish spiked with vinegar and chilies, with a sweet-and-sour tang. It was incredibly in-your-face when it first came off the stove, but after a week or so in the fridge it mellowed into something really flavorful and complex, with enough heat and vinegary bite to be interesting but not overwhelming.


It's good on crackers with a bit of cheese, or tucked into a grilled cheese sandwich (with extra for dipping). I would dress steamed new potatoes in it and drizzle with olive oil. Lots of possibilities.

The version of the recipe given below is for a far smaller quantity than my behemoth batch, and you don't have to process the jars -- just put the spread in a clean container and let it stay in your fridge; it should keep for several weeks. Use a clean spoon every time you take some out of the jar.

1. Turn on the broiler of your oven. Place whole red peppers, whole jalapeños, whole tomatoes, garlic cloves, and onion on a large cookie sheet and place under broiler. Roast, turning regularly, until tomatoes and peppers are blistered, blackened and softened and garlic and onion are blackened in spots. (You may need to take the garlic cloves out earlier, as they will blacken faster.) Remove from heat.

2. Place the peppers and tomatoes in a large bowl and cover tightly with plastic wrap; allow to cool for around 15 minutes. Allow garlic and onion to cool; peel when cool enough to handle and roughly chop. Set aside. Remove the peppers and tomatoes from the bowl; their skins should peel off quite easily now. Scrape off the stubborn bits of pepper skin with the dull side of a knife, but don't rinse -- little bits of char will not hurt the sauce. Cut the flesh of the peppers away from the seeds and core, and rough chop along with the tomatoes. (Be careful to remove all seeds and the white ribs from inside the jalapeño in order to keep the heat manageable.)

3. Place all vegetables in a food processor and purée till you have a rough mix.

4. Combine the vegetables, vinegar, sugar, salt, and olive oil in a saucepan. Bring to a boil. Reduce heat and simmer on medium-low for 20-30 minutes, until the mixture is thick. (It should mound on a spoon.)

5. Put the hot mixture into a clean jar, bring to room temperature, and refrigerate.