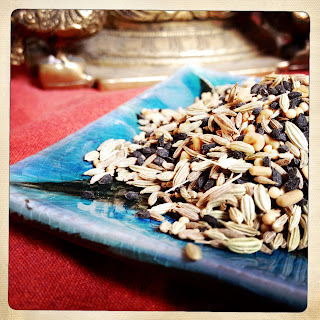 Most Indians grow up eating the foods of their own communities, even when we're flung far across the globe. Gujaratis eat their dhoklas (steamed chickpea flour bread) and slightly sweet curries, Punjabis eat their hearty fare of parathas and saag paneer and aloo gobi, Bengalis their fish curries, Telegus from Andhra their incendiary chutneys, Keralans their coconut-based broths, Goans their pork vindaloos, and so on. My mother is Sindhi and my father Mangalorean Christian -- their native cuisines couldn't be more different. Sindhi food is a food of the north, a desert food -- lots of wheat and besan (chick pea flour) and vegetables mixed in various combinations (many dishes are designed to use whatever is available in the market, so recipes for a single dish are endlessly varied). Meat and chicken and fish -- at least in my extended family, is served quite seldom. Mangalorean food is coastal food, cooked amidst coconut palms and jungles, rich with fish and pork and black pepper and coconut, and always served with rice.


In India, when you go to a market or spice shop, it's not always easy to find the ingredients of another region; grocers serve the local communities. You'll never find bafat power, a keystone of Mangalorean cuisine which everyone buys from their favorite purveyor rather than makes their own, outside Mangalore, for example; Parsi dhansak masala, used to make that incredible lamb, pumpkin, and lentil stew, would require quite the search in Kerala, etc.

But go to an Indian store in the U.S., even in an out-of-the-way town, and you can find everything in one place -- the whole of India (and Sri Lanka and Bangladesh and Pakistan) in one convenient location. The stores are ecumenical, and have to be -- serving as they do whatever South Asians end up in a hundred mile radius, all desperate for their taste of home. The diasporic grocer, my friend Aparna calls it: one-stop shopping no matter what your pleasure or your community.

These stores, depending how far they are from major metropolises, tend to be more than mere grocery stores, serving every need of the Indian community, every nostalgia, every desire. Not just spices but also cooking vessels, not just rice but also holiday decorations, not just exotic vegetables but also cricket bats, not just endless arrays of lentils but also pirated copies of the latest Bollywood flicks. The one closest to me is a clean, bright, well-stocked place with stacks of twenty-pound bags of rice near the entrance and the highest-tech cash registers I've ever seen (they make a Star Wars light saber sound every time an item is scanned). In the front is the grocery, and in the back the Gujurati aunties concoct samosas, chaat (Indian snack food), vegetable curries, and rotis for thali meals while the dosa-wallah makes the crispy rice and dal flour crepes on a huge tawa or griddle.

But there's more, even! Further in the back is an Indian beauty salon, where they wax and thread and exfoliate and henna you into perfection, seven days a week. I'm not sure how I feel about the proximity of hair removal and food preparation, but it has to happen somewhere, I suppose.

The last time Aparna and I were there it was Friday on the weekend of Diwali, the Indian festival of lights, and the place was packed with Indians there to fill their carts and stomachs with their favorite things, and -- weirdly -- a group of white students, mostly female, dressed in saris and salwar kurtas. The owner, a Gujarati man, chatted with Aparna in their common mother-tongue, while I chatted with an Andhran woman and her tiny son who had joined our table because there was no where else to sit. There were, if I'm not mistaken, northerners there (Punjabis, Sindhis), many from the south, perhaps some Bengalis, too, all expats, whether newly-arrived or a generation removed -- a variety of us Indians looking for a warm, well-lighted place.

Aparna and I roamed the aisles looking at what they had on hand. She -- an accomplished cook who grew up learning Sindhi cooking from her mom's side and Gujarati from her dad's and Tamil Brahmin cuisine along the way -- pointed out ingredients to me that I'd never noticed. Even when it came to the cuisine we shared, it turned out that my family emphasized certain dishes and ingredients, and hers others. We kept putting things in each others shopping baskets, happy to be trading information and flavors.

One of these ingredients that I had never used was a Bengali spice mix called panch phoron, which means, literally, "five spice" -- a melange of cumin, fennel, fenugreek, nigella (kalonji), and mustard seeds, not ground but left whole to be "bloomed" in hot oil at the start of cooking. The first time I used it -- in a simple red lentil (masoor) dal with a tadka or seasoning of curry leaves, sliced onions, and a healthy pinch of panch phoron added to hot oil and then stirred into the cooked lentils -- I was perplexed by the flavor. The earthiness of the cumin, the sweetness of the fennel, the bitterness of the fenugreek, the sharpness of the mustard, the umami subtlety of the nigella.

It's tempting, when talking about the way flavors and people and cultures and identities butt up against each other in this world of ours -- a world marked by immigration and movement and constant encounter with the unfamiliar -- to describe such situations as ones of hybridity. It's become a cliché, as if all that must happen is putting unfamiliar ingredients (or people) in a single pot and mix, as if there were not endless negotiations and clashes and dissonances that occur in the process. Asian fusion, it's sometimes called, when it comes to cooking. And when it comes to people?

This is what struck me, when contemplating this panch phoron, and the (to me) bizarre combination of flavors that I couldn't, in fact, stop tasting and puzzling over, unable to identify the source of its addictiveness. And then I realized -- it wasn't that the spices were perfectly balanced and harmonious that made it so tasty, it was the dissonance, the clashing, the multiplicity of competing tastes. It was, that is, a perfect metaphor for the mixing of people I saw in the Indian grocery, who find themselves thrown into a single space (a single town, a single country, a single world) and make something interesting out of their dissimilarities.

It's not the hybridity that's interesting, the melting pot -- it's the difference, and the pleasurable unfamiliarity that arises.


Panch Phoron
Makes about 4 tablespoons, enough for a few uses

You can buy this mix at an Indian grocer, or you can make your own.

Mix in a small jar 1 TB each of cumin, fennel, nigella (kalonji), and black mustard seeds, along with 1.5 tsp of fenugreek seeds. 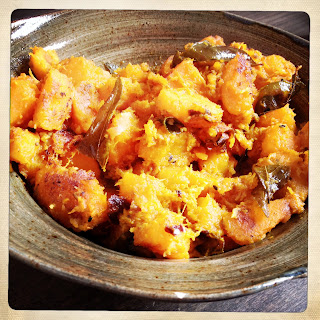 1. Peel and cut the squash into 3/4-inch pieces. You should have 4 or so cups for this recipe.

2. In a large, nonstick skillet, heat canola oil over high heat. When shimmering, add panch phoron. When the seeds brown and turn fragrant, add the red chilies, curry leaves, and ginger and toss for 15 seconds. Add the squash and mix to combine well.

3. Turn the heat to medium and add 1/3 c water to the pan. Cover the pan and allow the squash to cook for about 15 minutes until just tender; check regularly, mixing and adding a tablespoon or two of water if the pan gets dry. Now remove the cover, and add two healthy pinches of kosher salt, coconut, and the sugar or honey. Toss and mix till everything is well combined and the squash starts getting that brown caramel yumminess on the edges.

Kat said…
This sounds amazing. I was just thinking about the Indian grocers in Atwater Village. It's just like you say: sacks and sacks of rice, spices, flours, DVD's, statues of Ganesha, and the tables of sweets during Diwali. I had a fabulous pumpkin curry there, at their next-door cafeteria, a few years ago and will be making my own version sometime during the next couple of days.
November 5, 2013 at 3:40 PM

Anonymous said…
Your blog is fabulous! Can you tell us which grocer you go in the Williamstown area? Albany? Thank you!

The Invisible Flaneuse said…
Thank you! Yes, I go to Parivar and the Asian Supermarket in Albany (they're close to each other on Central Ave). There's also a store in Pittsfield, but I haven't been there.
November 12, 2013 at 10:18 PM

Cartloot said…
Hi there, thank you for sharing this such a wonderful info. I’d like to tell you about Indian Maggi Instant Noodles which loved by almost everyone in India. Also you might know about Indian spices and their magic. If you want to know more, simply Indian Grocery Online.You can order Indian Spices Online in the USA.
And do not forget about Ayurvedic Himani Navratna Hair Oil massage it to keep you away from daily stress. Here Are Some of the Most Favourite Instant Noodles and Loved By Almost Every Indian. Get Maggi Instant Noodles At Cartloot.