I've always felt slightly guilty for my inability to be moved by poetry. I've seen it not so much as an intellectual failure -- or, maybe more precisely, not *only* as an intellectual failure -- but as an emotional failure, too. A sign that part of me is closed off to the world, hardened. I'm not sure why poetry should signal this to me more than any other of the arts, but it does. Maybe it's because I remember those times when my ex would turn to me while we were both reading in bed and read that passage from Anne Carson or Anna Akhmatova that had struck him as particularly beautiful -- I remember, that is, the look of sadness on his face when he saw my blank response, or worse when he saw my effort to connect.


It was the effort, maybe, that spelled our doom. My determination to try. People say that marriage is hard work, and it is -- but there are some things that should be easy, effortless. There is no romance in one person working so hard to appreciate a lover's gesture.

After the split, I went on a date with a man who I'd met on an internet dating site and who had a beautiful voice. We had spoken on the phone but never seen each other face to face, and I was not prepared for the strangeness of that experience. He was a "foodie" in the worst sense -- a stickler for authenticity -- and was hugely suspicious when I suggested we meet for the first time at a restaurant that served the most amazing Szechuanese and Shanghaiese food I'd ever eaten. "But their website," he said, "looks pretty bad." It's true, the website was nothing but beef with broccoli and moo shoo pork, dishes I'd never seen served there. "Trust me," I said, realizing not for the first time how ridiculous internet dating was. "Trust me," I said, as if I had the capacity to trust anymore, let alone someone who was a complete stranger to me.

He showed up early and had studied the menu before I'd arrived. He was impressed, and a bit surprised that I had managed to find this place -- it was not at all obvious to discover a restaurant like this on that street in that town. I listened to his enthusiastic response while swallowing my naïveté: he was older than his pictures -- much -- and he was wearing pants hiked up too high over his belly so that his ankles showed, and bad shoes, and a Member's Only jacket (bad enough) with "Sun Microsystems" printed over the chest, something he had gotten for free at a tech conference (immeasurably worse). He had old teeth and short, fleshy fingers. The fingers scared me a little.

And lest you think the disappointment was one-sided, I saw the telltale flash in his eye when I showed up, too -- that momentary look of crestfallenness. I don't know what he hoped I was, but I wasn't it, either.

We made the best of the evening, trying to find things to talk about that would eat up time. I ate more than I should have, just to keep my mouth full. Despite the awkwardness, he was smitten by the end of the evening; I was not.

When the conversation turned to relationships, we both revealed more than was wise -- isn't it the first rule of dating that you never talk about your ex? -- but we were two people consumed by pain and bitterness. Mine was so fresh, his rancid. In the wake of the breakup I felt like such a failure, and I told him so. I think he heard in my confession a confirmation of what he wanted so much to be true: that it was his ex-wife who had failed him, as women do. I bristled. No matter what the circumstances of a breakup, I said, it's inevitable to feel you stumbled. It has nothing to do with who actually was at fault.

He squeezed my hand with his fleshy fingers, a gesture that I know was supposed to comfort me but which repulsed me instead.

The next day, he sent me a poem that he said he thought might speak to me. Whatever the disastrousness of the date, I received it as a gift. It was the first time, perhaps, that any poem had moved me, and it forced me to think about success and failure differently, about what I had achieved in my relationship as opposed to how I had failed it. I never saw that man again -- don't even recall his name -- but from him, I got a treasure.

This is the poem: "Icarus," by Jack Gilbert.


Everyone forgets that Icarus also flew.
It's the same when love comes to an end,
or the marriage fails and people say
they knew it was a mistake, that everybody
said it would never work. That she was
old enough to know better. But anything
worth doing is worth doing badly.
Like being there by that summer ocean
on the other side of the island while
love was fading out of her, the stars
burning so extravagantly those nights that
anyone could tell you they would never last.
Every morning she was asleep in my bed
like a visitation, the gentleness in her
like antelope standing in the dawn mist.
Each afternoon I watched her coming back
through the hot stony field after swimming,
the sea light behind her and the huge sky
on the other side of that. Listened to her
while we ate lunch. How can they say
the marriage failed? Like the people who
came back from Provence (when it was Provence)
and said it was pretty but the food was greasy.
I believe Icarus was not failing as he fell,
but just coming to the end of his triumph. 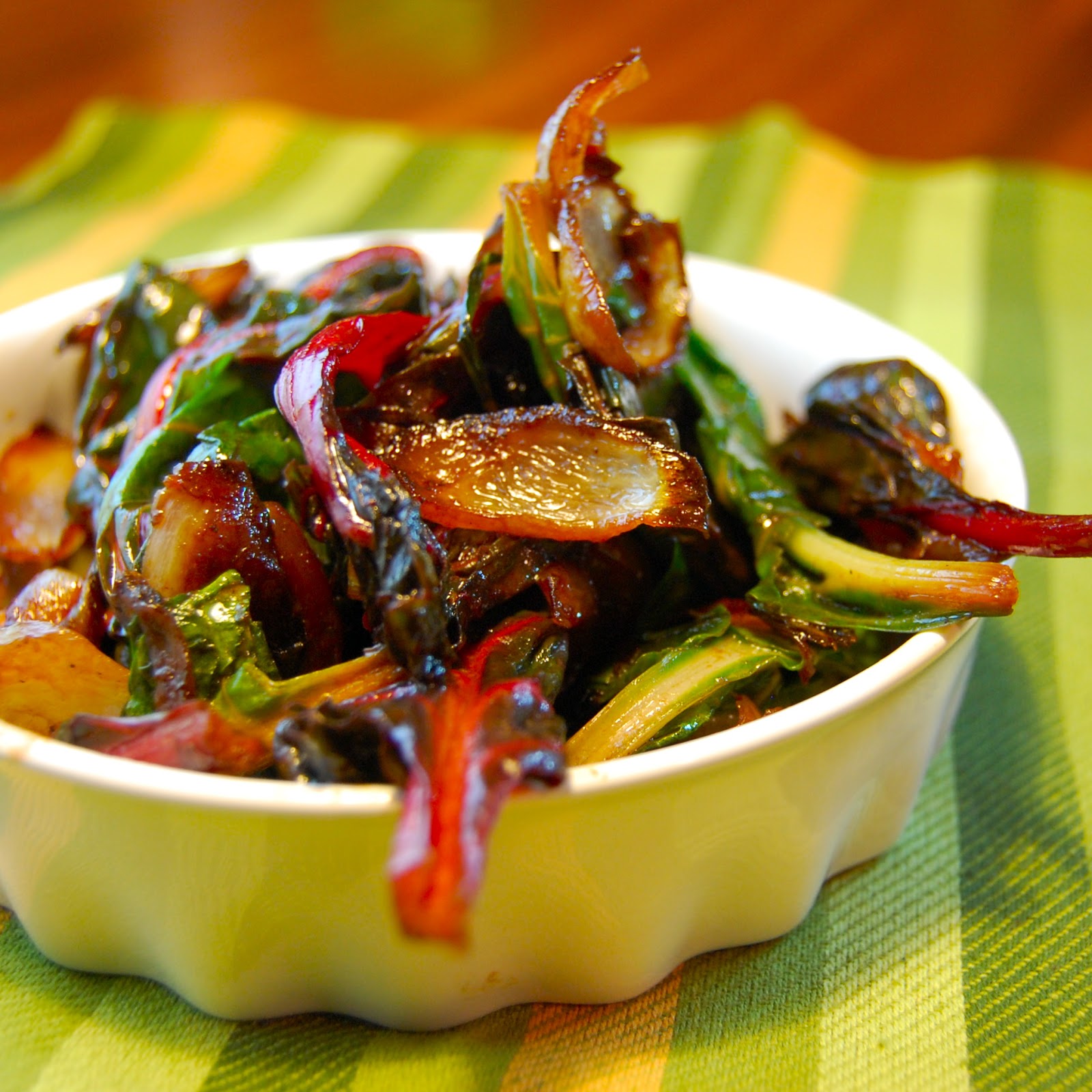 1. Wash chard. The chard I used was quite small and tender, so I didn't bother cutting it; if your chard is big-leafed, cut it into thick ribbons. Cut cipollini onions in half from root to tip, and then cut each half into 1/2" wedges.

2. Heat oil in a medium sauté pan over medium-high heat. Add onions and turn down to medium. Sauté for about 5-8 minutes until soft and browned; adjust the heat so the onions don't burn. You want them beautifully caramelized.

3. Add the chard, water still clinging to its leaves, to the pan, along with a good pinch of kosher salt; turn up to medium-high. Stir with tongs until the chard wilts, adding a TB or two of water if necessary. When it's wilted and cooked, add balsamic vinegar and let it bubble away. Adjust seasoning and serve hot.
Email Post
Labels: Icarus Jack Gilbert poetry side dish Swiss chard with caramelized onions and balsamic vinegar vegetables vegetarian