Every few years, I find myself in the throes of a very particular sort of entirely inappropriate crush. The thing is, I know these infatuations are impossible, unsuitable, unfitting, unseemly, unbecoming, unbefitting, improper, and generally embarrassing. Luckily, for all my failures in self-control when it comes to food, Facebook, and binge TV-watching, I am the master of self-abnegation in other aspects of life, so there's never been a question of acting on these particular excessive feelings. I'm silly, but I'm not stupid.


When I was 29, it was a near-60 year old, spectacularly unattractive man I worked with whose sense of humor was self-serving and whose voice was so rumbly it would give me headaches. When I was 35, it was an ethereal young student of mine who was young enough to be my much, much, much younger brother; he would sit in my office for hours on end with his doe eyes and his eagerness to please, wanting to discuss with me the meaning of Art -- a conversation I indulged only because of the crush, because I really couldn't care less about the topic. (I like art a lot, but I really have no interest in Art, if you know what I mean.)


Right now, my embarrassing craving is the husband of a dear, dear friend who I would never touch with a 10-foot pole, not only because of loyalty to my pal. Dude has issues. Plus he's old, and getting wrinkly in the wrong places. Also reeks of insecurity.

There I go. Doth protesting too much. But honestly.


It's not that I don't have other, more appropriate ridiculously inappropriate crushes -- I have plenty of that kind, too. The kind that involve men I find genuinely attractive and stuttering shyness and blushes and tripping as I walk away and giggling and planning out chances to bump into each other and endless worry about saying the wrong thing and anxiety about if he'll call back etc. But this particular variety of infatuation is different. I may have those treacly, blushing, I-really-like-this-person-and-would-like-something-to-happen crushes with plenty of out-of-reach objects of affection -- people across oceans, people who are way out of my league, people with whom, realistically, I have absolutely nothing in common -- but the distances of this other kind of craving are more consequential, in their way: the distance across a teacher's desk, the distance across decades of age and miles of understanding, the distance across a treasured friendship. Distances that I don't have the will, energy, or desire to travel.

One of my favorite pieces of contemporary art is Sophie Calle's Suite Venitienne, a photo essay in which she "documents" -- scare quotes, because it's never really clear with Calle how much truck "documentation" has with "what actually happened," but that's neither here nor there -- her search for a man. A man who came on to her at a party in Paris, someone she hardly knew; a married man who disgusted her, slightly, with his overtures. He said he was going to Venice the next day, and, not knowing anything more than that, Calle hopped a train and arrived in Italy, going from pensione to pensione, square to square, describing him to locals and tourists and asking whether anyone had seen him. She plays out the obsessed lover and the disinterested detective at once. The policeman, serial killer, and heartsick girlfriend. She is both powerful -- seeing him without being seen, she has the power of vision -- and powerless -- beholden to his movements, dragged around by a leash he has no idea he holds.

But all the language of love, of desire, of obsession, of submission to uncontrollable impulses, is itself a red herring. It's not the man who excites her but the chase. Calle is fully aware of it, but has to keep reminding herself about it: "I must not forget that I don’t have any amorous feelings toward Henri B. The impatience with which I await his arrival, the fear of that encounter, these symptoms aren’t really a part of me." This man, this virtual stranger who she first encounters with distaste and even disgust at his drunken advances, is merely a screen onto which her own fantasies and narratives are projected: "There is such a gap between his thoughts and mine," Calle writes. "I’m the only one dreaming. Henri B’s feelings do not belong in my story."

I keep thinking of an teacher I had in high school -- a charmer, with a German accent, who, in his old age (he was probably IN HIS FORTIES) was dating a very young woman and let us know it at every opportunity. I was sitting across from his classroom one day, back against the lockers, talking to one of the more, ummm, spirited girls in school, the one with all the dangerous boyfriends. She was talking to me -- me, the wide-eyed innocent who had never kissed a boy but who despite that, weirdly enough, ended up providing birth control information to lots of the more experienced young women in my class -- about her most recent prospect. The teacher overheard and walked up to us. "You girls," he said, in a way that made me a bit nervous but without knowing why. "You're like dogs chasing a car. You'd have no idea what to do with the car if you ever caught it." My friend was incensed. "I'd know EXACTLY what to do with the car!" she shouted, as I shrunk into the lockers, knowing I didn't want the conversation to continue not least because I didn't want to hear her false bravado and I didn't want to face the baldness of his boundary crossing.

He didn't get that dogs don't chase cars because they want the stupid rustbuckets. They chase them because they love the feeling of wind in their fur and the burning in their lungs and the thrill of the danger when they run. Makes them feel alive. 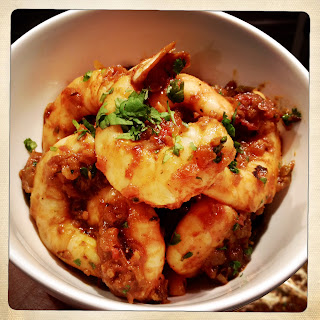 This is a terrific, savory curry from the Parsi community -- descendants of the Persians who landed on Indian shores about a millennium ago. It's got a pretty thick gravy, and balances hot, sour, and sweet in a completely delicious way. I serve this either as part of an authentic Indian meal, or as part of a more international array of dishes -- with an herbed couscous and carrots with preserved lemons, for example. Adjust the heat to your taste, and note that if you don't have curry leaves just leave them out -- this is a dish that really is fine with just cilantro as the herbal note.

1. In a large sauté pan, heat canola oil over medium-high heat. When hot, add cumin seeds. When these start to sizzle and become fragrant, add curry leaves and allow to fry for 10 seconds or so. Then add onions and sauté over medium heat until golden brown, about 10-12 minutes.

2. Add the garlic and chili to the pan and sauté for 30 seconds or so, and then add the bowlful of spice mix. Stir for a minute or so until the spices are toasted, and then add the tomatoes to the pan and turn the heat to medium-high. Sauté for 4 or 5 minutes until the tomatoes break down and the sauce becomes fragrant and thick, stirring occasionally.

3. Add the tamarind water, brown sugar, and cilantro leaves, along with 3/4 c water. Allow to cook at a lively simmer, uncovered, for about 10 minutes. Taste the sauce: it should have a nice balance of sweet and sour flavors; adjust the salt. Add the prawns to the pan and stir to combine. Cook for another 5-10 minutes until the prawns are cooked and the gravy is thick and sumptuous.
Email Post
Labels: Indian cuisine non-vegetarian Parsi cooking prawn curry prawn patia seafood

Katie said…
This is just what I was looking for. And I LOVE the blog post.