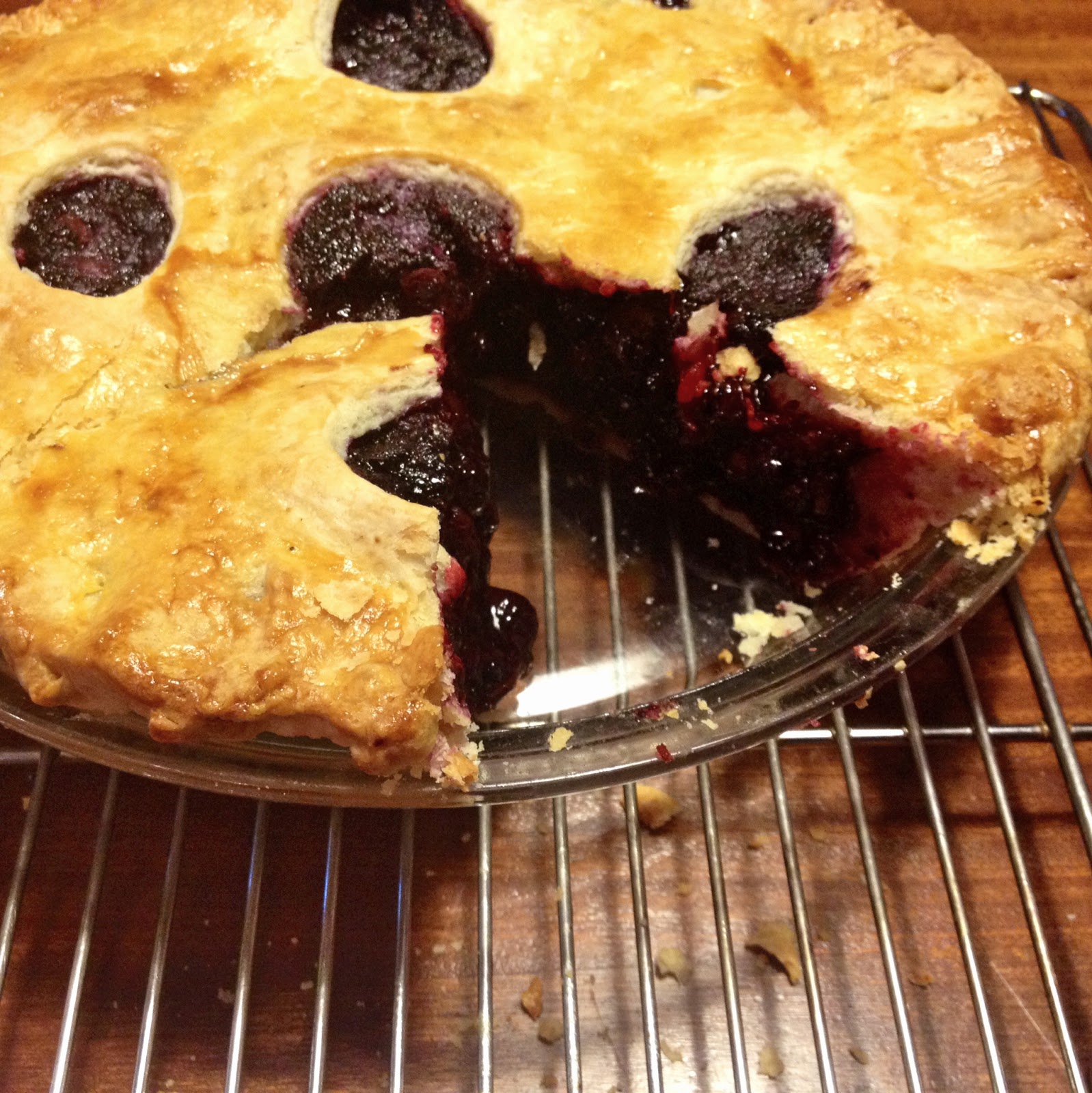 I am not a terribly skilled baker -- too much precision for me, and baking is too occasional an activity for me to really get better at it. But I do love the idea of baking: I dream of turning out the perfect, frosted cake -- the kind without cake crumbs scumbled through the icing -- or of baking a pie with a flaky crust that doesn't ooze out into nothingness when you lift a wedge out of the pan.

Neither of these things is much more than a dream for me. Except, as is turns out, for blueberry pie. This is a recipe that I make so consistently well that I feel no embarrassment -- me, the mediocre-at-best-baker -- passing it along to you. If I can do it, it must mean it's foolproof. Let's call it a confidence builder.

Of course the first thing one must do when making blueberry pie is obtain blueberries. Although I am sure this recipe can be achieved using frozen berries, I have never tried it and likely never will. (I am determined to hang on to my fragile success here.) Instead, I take my daughter (and any willing friends of hers) out to a local farm to pick fresh berries in August.

The second thing you must do is buy a bottle of vodka and put it in the fridge. No, not for consoling yourself when the pie fails -- on the contrary, thanks to Cooks Illustrated magazine we now know that vodka is the secret to perfect pie crust. Just don't make the mistake I did and absentmindedly put a piece of raw dough in your mouth -- you will feel the kick. Don't worry -- all the alcohol burns off in the baking, so this pie is safe for the under-21 crowd.

The third thing you must do is buy a box of instant tapioca. This recipe, a streamlined version of a Cooks Illustrated formula, uses ground up tapioca to thicken the filling, giving the pie a lovely firm (but not pasty) texture, so it holds together nicely.

Oh, and when I say it's a streamlined version of a Cooks Illustrated recipe, what I mean is that I purposely left one ingredient out and accidentally left another one out. And it turned out perfect -- just how I like it. 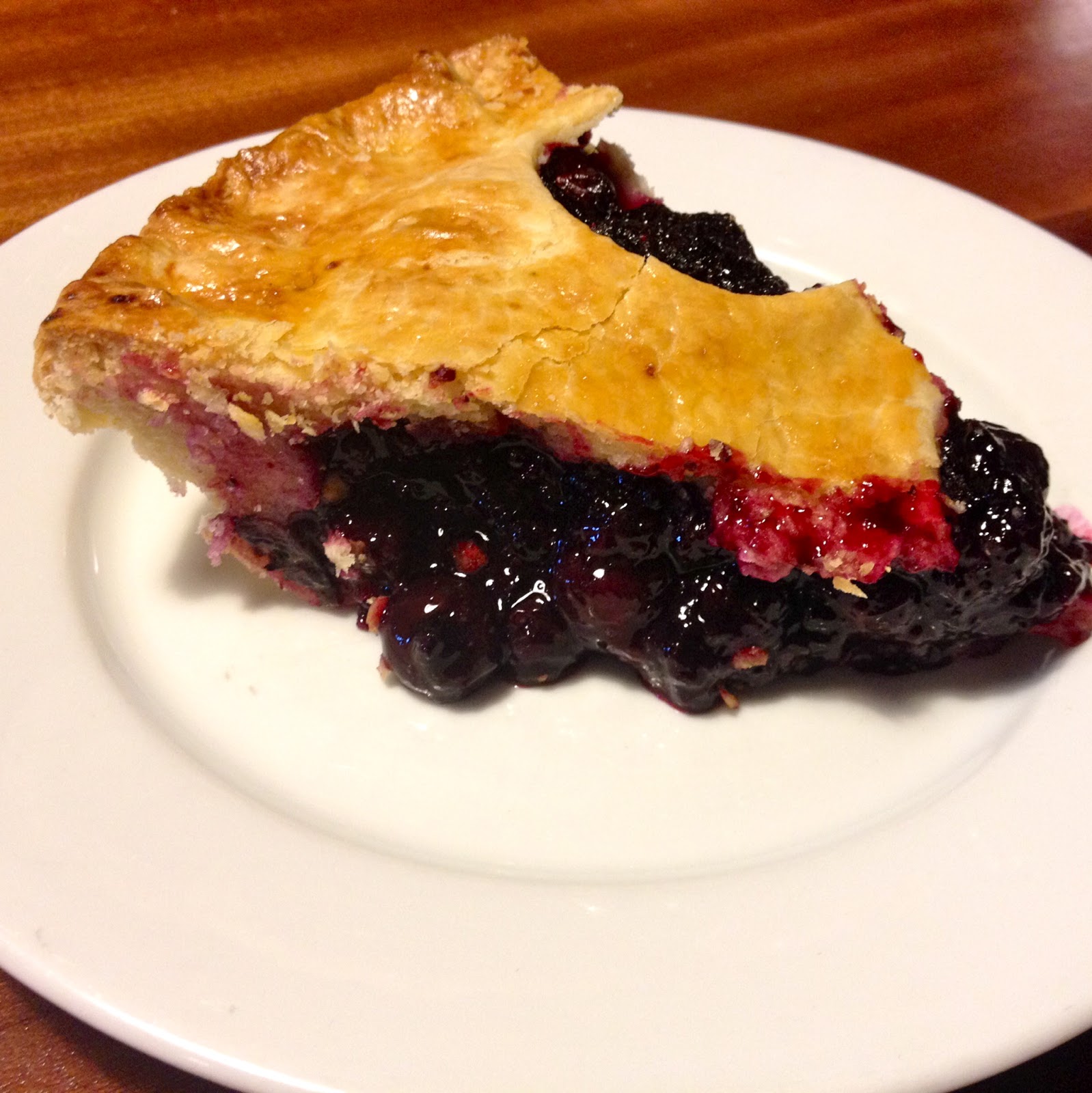 For the filling:
6 c blueberries, picked over and rinsed
3/4 c sugar
zest and 2 TB juice from one lemon
2 TB instant tapioca, ground in a coffee grinder
pinch of salt
2 TB butter, cut into small pieces
1 egg, beaten with 1 tsp water.

1. Put 1-1/2 c flour, salt, and sugar in the bowl of a food processor fitted with the metal blade. Pulse once or twice to combine. Scatter slices of butter over the flour mixture and pulse for about 15 seconds or so till the butter is combined with the flour but large chunks remain. Scrape down the mixture from the sides of the bowl and add the remaining cup of flour; process for another 10-15 seconds until the texture is that of fine meal.

2. Transfer to a bowl. Add vodka and water and start to mix with your hands or a spatula until the dough comes together; if necessary add a little more water, a tablespoon at a time, until the dough forms a ball when you gather it in your hands. Divide the dough into two balls, flatten into disks, wrap in plastic, and place in fridge to chill for at least 45 minutes.

3. Take one of the disks out of the refrigerator. On a lightly floured surface, roll out into a 12" circle. Transfer the dough to a 9" glass pie plate, gently lifting it so it fits down into the bottom and sides of the pan. Pat it lightly so it's nicely settled in; don't trim the edges. Put the pie plate in the fridge so the crust has a chance to firm up before filling and baking.

4. Preheat your oven to 400º, placing a cookie sheet on the lowest rack in order to catch drips. Now make your filling: Put 3 c of blueberries into a saucepan and place over medium-high heat. Mash the berries a few times with a potato masher and allow them to cook and release their juices; mash the berries occasionally until about half of them are crushed. Allow the mixture to cook and bubble away for about 8-10 minutes, until it's reduced and thickened somewhat. Turn off the heat and allow to cool for a few minutes.

5. Place the remaining 3 c berries, sugar, lemon zest and juice, tapioca, and pinch of salt in a mixing bowl. Add the cooked berries and mix till combined. Remove pie plate from refrigerator and fill with the blueberry mixture. Sprinkle the butter pieces on top. Now take the second disk of dough from the fridge and roll it out into an 11" circle. Take a small biscuit cutter or (as I did) the top of a spice jar and cut 5 circles out of the dough (these are your steam vents). Put the top pie crust over the pie (you can loosely roll it around the rolling pin to transfer it) and use scissors or a sharp paring knife to trim the crusts, leaving about a 1" overhang. Tuck the crust under so it's flush with the edge of the pie plate, then crimp the edge so it looks pretty and is nicely sealed. Brush the top crust with the egg mixture.

6. Place in the preheated oven and bake for 30 minutes. Lower the oven temperature to 350º and bake an additional 30-40 minutes until the pie is bubbling and well-browned. Remove from the oven and cool on a wire rack for at least a few hours so that the filling can set and it will cut cleanly.
Email Post
Labels: baking blueberries dessert fruit pie vegetarian

miawri said…
Hi There,
Thank you for sharing the knowledgeable blog with us I hope that you will post many more blog with us:-
Mazar Hashish is made from an indica rich Mazar-i-Sharif strain from neighboring Afghan Uzbekistan and is famous for producing high-quality strains of hashish.
Email :info@globalweedfarm.com/ peryglory2@gmail.com
Click here for more information:- more info
March 7, 2022 at 7:19 AM