Every August as I contemplate the bounty at my CSA farm I am struck with the entirely unoriginal thought: "I should make ratatouille." 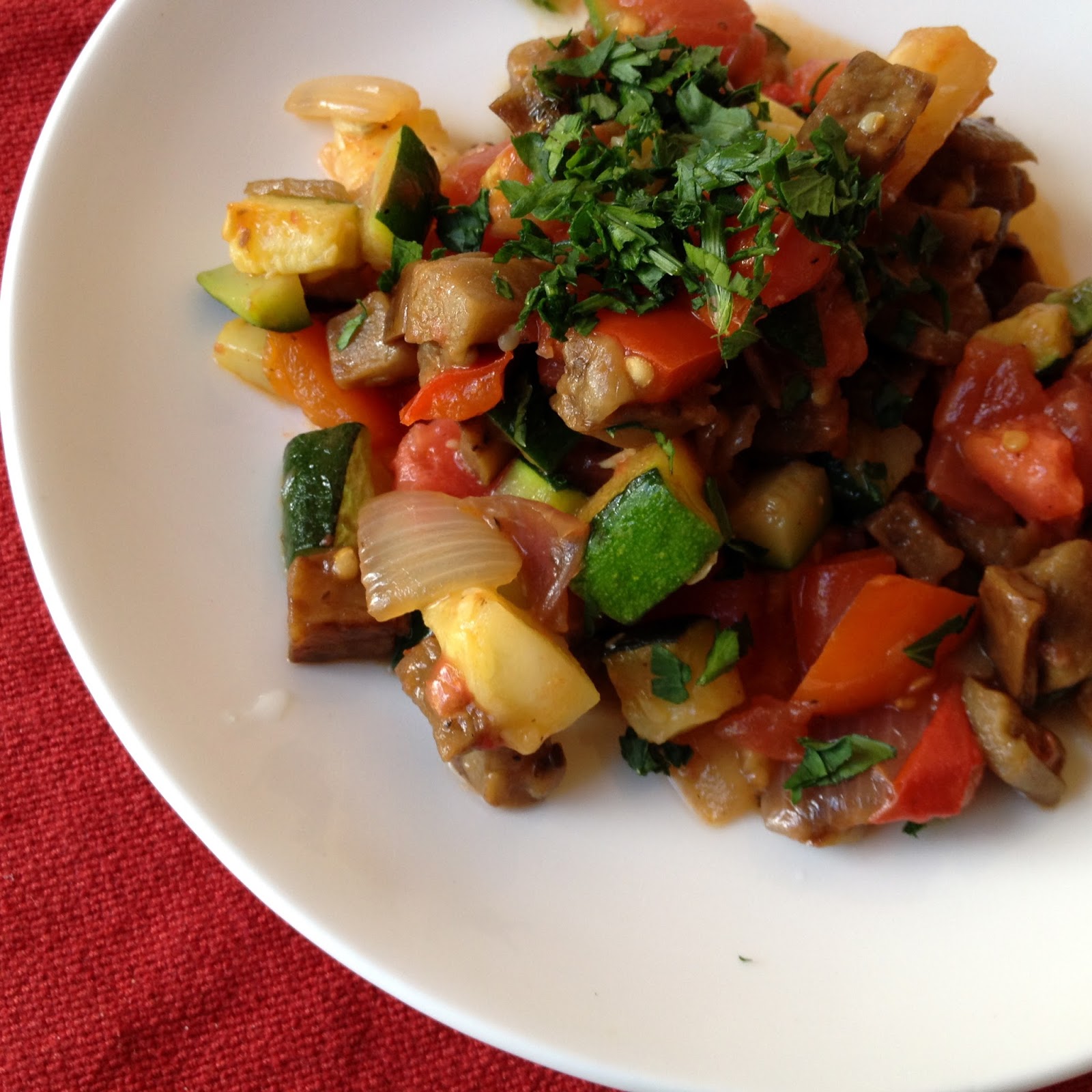 Originality is overrated, in my opinion, so I am happy to offer you my recipe today.

This is why you make it in August: because eggplants, zucchini, and red peppers are all ripe. Because parsley and thyme are abundant in your garden. Because you make it and then leave it on your counter and eat it at room temperature for every meal, whenever or however it strikes your fancy.

Because it tastes like the south of France, even if you've never been there.


Here's how I serve it: alone, in a big bowl, with some chunks of hearty bread; on a plate with some cheese and maybe some slivers of sopprasetta for a simple dinner when you don't feel like cooking; alongside any grilled meat or fish (lamb especially, or branzino), with maybe some olive-oil doused potatoes alongside; tossed with cooked pasta (orechiette is nice, or penne) and served room temperature topped with shavings of parmesan; on a platter with marinated anchovies, olives, bread sticks, and a white bean dip.

However unoriginal and versatile the concept is, I am exceptionally picky about it. The eggplant has to be cooked till no sponginess remains, because OMG gross, at the same time as it should not just dissolve into mush. The vegetables have to retain their distinct identities, and not disappear into a sauce. The tomatoes -- every part, really -- should be bright and fresh and taste of summer. There should be sweetness and the sunniness of citrus, and the chlorophyll astringent taste of parsley. And it should offer you the richness of olive oil in every bite.

It should taste, in other words, of August. Of pure, unadulterated August.

Ratatouille
Serves 6 as a side dish

In my version, each vegetable is cooked on its own in order to maintain distinct flavors. As with many of my recipes, you'll see that I ask you to add salt at each stage -- this allows each element of the dish to be properly seasoned and creates layers of flavors. A good trick, whatever you happen to be cooking. A pinch, for reference, is a big healthy pinch of kosher salt -- as much as you can grab with your fingertips.

1. In a large, nonstick skillet, heat 1.5 TB of olive oil over medium-high heat. Add onion, garlic, bell pepper, along with a healthy pinch of salt, the thyme leaves, and a grinding of pepper. Sauté until the onions and peppers turn soft and golden (don't let them get brown), about 8-10 minutes. Remove to a large bowl.

3. Optional step: if your eggplant is softened to your liking, proceed to the next step. If a bit of sponginess remains, mix the contents of the bowl back to the pan, and allow to cook over medium or medium-low heat for about 10 minutes, until the eggplant is quite soft.

4. Remove all contents from the pan into the large bowl. Set the pan back over medium-high heat, and add the remaining 1.5 TB of olive oil. When hot, add the zucchini, a large pinch of salt, and a grinding of pepper. Toss the zucchini in the pan until it cooks and turns golden, about 5 minutes. Add to the bowl.

5. In the pan, still over medium-high heat, add the tomatoes and a large pinch of salt. They will immediately release liquid into the pan. After two or three minutes, remove the tomato pieces from the pan and add to the bowl, allowing as much of the juice as possible to remain in the pan. (The tomatoes will be just heated through and relatively intact.) Turn up the heat to high and allow the tomato juices to reduce to a thick syrup; pour over contents of the bowl.

6. Add 2 TB parsley and the lemon juice to the bowl and toss gently so that everything is combined. Taste for salt -- add more if necessary. Allow ratatouille to sit at room temperature for at least a couple of hours so the flavors meld. Stir before serving, and garnish with the remaining parsley.
Email Post
Labels: eggplant ratatouille side dish summer vegetables vegetarian

Lisa Lambert said…
I totally just stole that recipe with the click of a button (I use copymethat.com to keep all my recipes) and I will be making it this week too because my CSA is full of all these. Plus purple beans. Thoughts on purple beans?
August 17, 2014 at 9:25 PM

The Invisible Flaneuse said…
I can only eat string beans of any color when they are cooked really really well (allergies), so I generally do them the way I used to have them in Greece: lots of olive oil, crushed garlic, sliced onion sautéd till golden, then a large tomato (diced) and about a pound of beans, cut into 2" lengths, along with salt and pepper. Add about 1/2 c water and stew, covered, until really soft. It tastes great warm or at room temperature.
August 17, 2014 at 9:32 PM