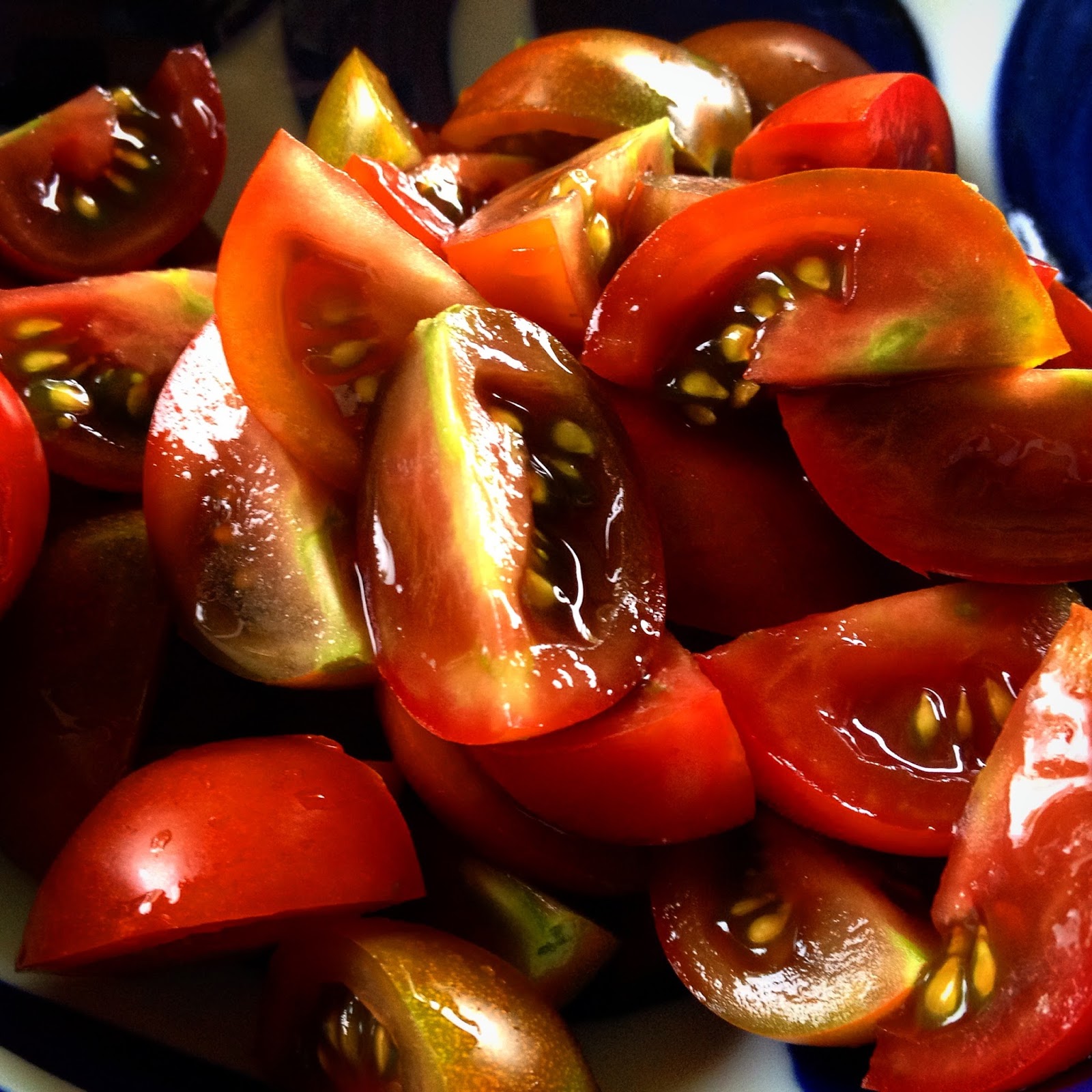 It has slowly dawned on me that when people speak to me (or I to them) about eating locally, and participating in a CSA, and farm-to-table cooking, we are often not speaking of the same thing at all.
When friends spoke recently of their qualms about the carbon footprint of belonging to a CSA, and all the imported tomatoes they were eating, I was confused -- this sounded like no Community Supported Agriculture farm I was familiar with. When I queried them about the box they received every week, I balked at the use of the term CSA to describe what was simply an organic food delivery service: some items gathered from local farms, supplemented by vegetables imported from Chile and Mexico.


The conversation revealed a total disconnect in our understandings of what CSA meant. It's often a surprise to people that belonging to a Community Supported Agriculture farm in my part of the world means actually going out to a farm once a week to pick out your vegetables, either from an already-picked array or from the fields themselves. At some CSA farms you can take part in the communal work of weeding and harvesting. And you're not exactly consumers -- this is not simply pre-paying your grocery orders -- nor shareholders: you accept the risk of a bad harvest but benefit from the bounty of a good one, your share ebbing and flowing according to the vicissitudes of nature. There is no price per pound involved. And you don't get to eat tomatoes in January.

Likewise the term "local" which pops up on menus everywhere. What does it mean? For me, in this ridiculously bucolic part of the world, local means within 5 or 10 miles, often. My vegetables come from 5 miles to the northeast, my milk and cheese and beef from 5 miles to the southeast, my eggs come from across the street or a block over, depending how my neighbors' hens have been producing. If I'm lucky, my tomatoes come from my own garden, along with some eggplants and herbs.

I was looking at a menu for a delicious-seeming restaurant in Manhattan. It's on Bond Street, on the edge of the East Village and not that far where I used to live when I first came to New York in the early 1990s, when that neighborhood was still quite gritty and a bit scary, and its far reaches to the east housed sizable Dominican and Haitian communities. The menu claimed that the eggs served by this hipster resto were "local, free range, and hormone free."

I kept reading the phrase over and over, thinking: "what could this mean?" What does the term "local" mean for a restaurant in Manhattan? What do the chefs mean when they say it, what do its customers understand it to mean when they hear it? Is it a term, like organic, that has been stretched to the point of meaninglessness, or are there really chicken coops in Queens and Jersey City and Yonkers where the restaurants like this one are sourcing their eggs? And if they are, is it healthier to eat eggs from chickens raised in polluted, urban environments than it is to get your eggs from hundreds of miles away?

In fact, there are eggs in Manhattan, and chickens, and bees and goats (although I doubt this restaurant from Bond Street is getting their food quite so locally). Well-educated, (relatively) well-off, and largely white urban 30-somethings have embraced the idea of urban farming, and are increasingly keeping livestock in their tiny backyards and taking out plots in community gardens in order to have more control over their food, producing their own instead of being at the mercy of fertilizer-dependent and GMO-happy agribusiness and long-distance, gas-guzzling trucking.

But what struck me as most perverse about this use of the term is the way in which this new vogue for urban farming is merely a reiteration of a much maligned earlier practice among immigrant groups in the city. I remember living in the East Village back in the day and being woken by the noisy roosters kept by Haitian immigrants in the neighborhood, and the city trying to crack down on such practices. I remember the not-so-distant banning of the sale of live chickens in Chinatown, and the outcry against Chinese butchers slaughtering the chicken after selling as an animal rights issue. I remember the scrappy community gardens on the Upper West Side, tended to by Caribbean and African American gardeners and decried by developers and gentrifiers as the "acceptable" part of the neighborhood kept creeping north of 86th St and west of Broadway, encroaching on an ethnically and economically diverse area of the city.

There are two issues here, or maybe just one: the commercialization of terms like local, farm-to-table, etc. as comforting palliatives for consumers that mean, essentially, nothing, and the way in which the so-called new urban farming movement is in fact the consequence of gentrifying neighborhoods and displaced populations. Of people keeping bees and chickens and growing vegetables in the places where people did before, but now patting themselves on the back for it rather than seeing it as a disruption, a blight, a sign of lack of assimilation rather than a positive step towards food independence.

Eating locally, taking part in community supported agriculture: in order for these terms or actions to be meaningful, we need to be thinking about our localities and our communities. We need to be thinking about our place in them, who we displaced, who we will precede. And we need to understand that if we live in a place where those terms are meaningless, or attenuated to the point of meaninglessness, that's okay, too: we can't all be farmers in the Berkshires, with their pretty cows and chickens in the yard picking at the bugs in the overflowing garden or live next to them, either. We can be thankful that such places exist, and make the best possible choices that we can make wherever we do manage to live. But let's allow the terms to remain meaningful, shall we?

Pizza with Eggplant and Tomatoes
Serves 1 and a half people 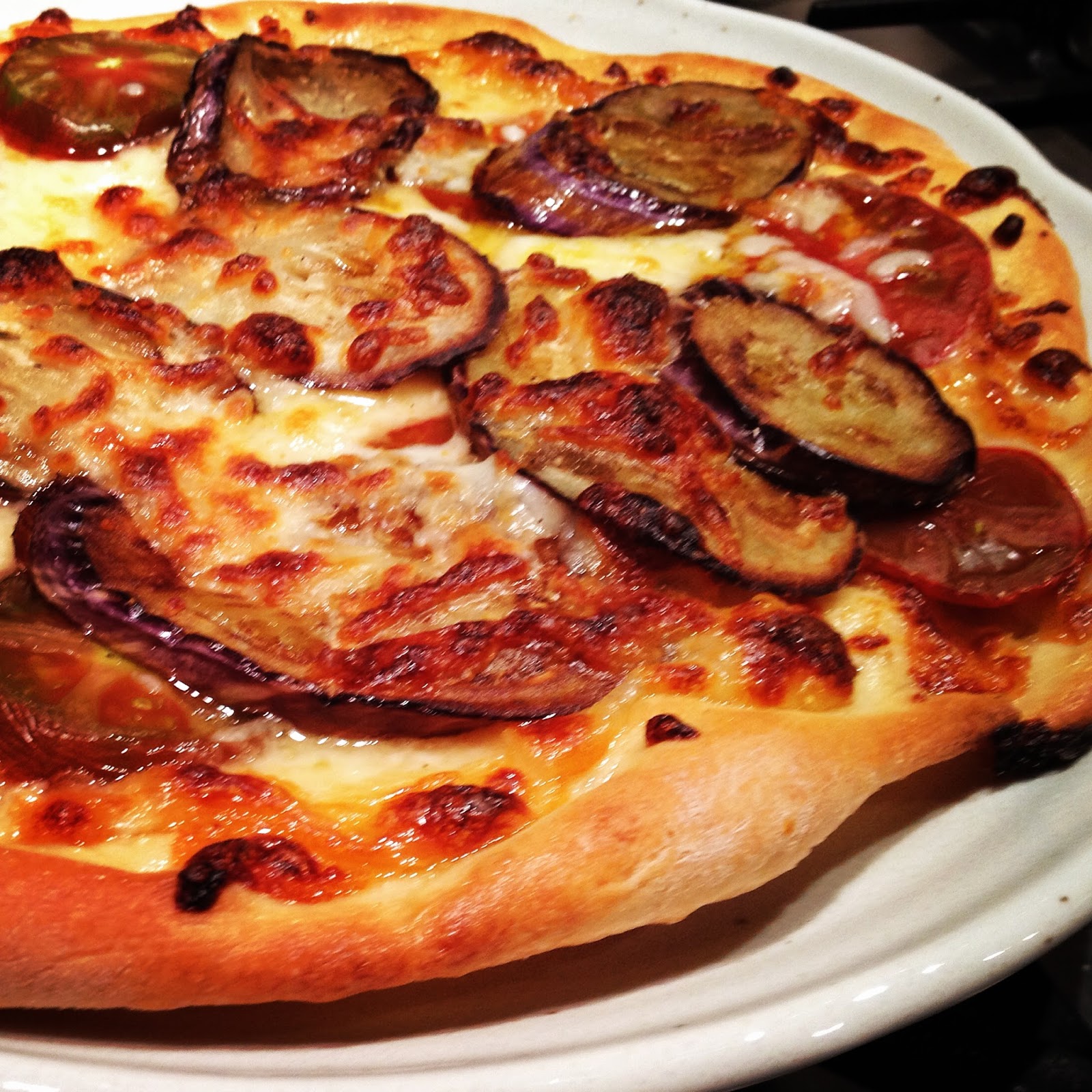 I made this last night with eggplant and tomatoes from my garden. It was so divine that even my daughter agreed to eat it.

1. A good half hour before you plan to make the pizza, place pizza stone on the middle rack of your oven and turn the oven on to the highest possible temperature (500º for me).

2. On a well-floured board, shape ball of pizza dough into a circle, about 9 or 10" across. Allow to rest while you proceed with the recipe.

2. Heat a skillet large enough to hold eggplant slices in a single layer over medium-high heat. Add  2 TB olive oil and place eggplant slices in the pan; sprinkle with kosher or sea salt. Allow eggplant to cook about 2-3 minutes on one side, and then turn with a fork so they can cook about the same amount of time on the other side. Adjust the heat so they don't scorch; the goal is soft with a few brown spots here and there.

3. Mix 1 TB olive oil with garlic and a pinch of salt in a small bowl.

4. Sprinkle a pizza peel or thin cutting board with cornmeal. Place pizza crust on it and shake it around to make sure it's not sticking anywhere. Brush the round with the garlic oil, then top with about 1/2 c of mozzarella. Place the eggplant and tomato slices over top, and then sprinkle with the remaining mozzarella and the parmesan.

5. Slide onto pizza stone and allow to cook till the crust is brown at the edges and the cheese is melted and browned. Remove pizza using the pizza peel or cutting board and tongs, and allow to cool for a minute or two before cutting into it.

Nandia Vlachou said…
Terrific text - particularly the observation on the different perception of practices when they were deemed representative of minorities (backward, poor), as opposed to the country's white middle class (environmentally conscious, progressive). Very astute.
September 12, 2014 at 6:31 PM