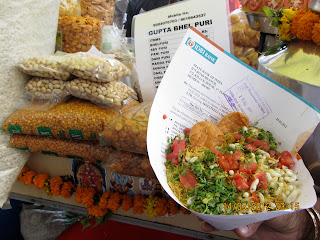 When I lived in Bombay during the year between undergrad and grad school, I split my time between the homes of two of my aunts -- Sheila, who lived with her husband and her daughter in Bandra in a flat that looked out to the sea, and Nina, who lived with her husband and her son and her husband's parents in a Colaba high-rise. I was working for Sheila's ad agency; she was so kind to take me on as a copywriter -- I was more trouble than I was worth. I'd stay in Colaba during the week because the commute to the office was so much shorter, and drive out to Bandra on the weekends. Many of my other relatives lived in that little area, Colaba, all within walking distance. It was my neighborhood.


Nina's mother-in-law (who I call Aunty) is an amazing cook. She follows an old custom of having a Brahmin cook come to her house every few weeks to make the things that are very complicated, time-consuming, or tedious to prepare, so instead of going out to the shops to get sev (thin, fried, chickpea flour "noodles") or kurmura (puffed rice) or chakalis (a chickpea and rice flour "pretzel"), she brings someone in to make it fresh. (Brahmins are high-caste but not always wealthy; because they are the "purest" of the castes, many hire themselves out as cooks. Brahmins can't eat non-Brahmins' cooking, technically, but everyone can eat theirs. That said, no one in my family ever talked about caste, so I think this particular cook was hired just because he made good food. I've never known anyone in my family to refuse food. Made by anyone. Ever.)

Despite following this particular tradition, Nina's in-laws didn't stand on ceremony about anything much else. The food was always prepared in the kitchen, and people came home and fixed a plate for themselves out of what was there; there was no obligation to sit down together for meals. I'd walk home from work (to my family's horror, I think, because I crossed some of the smelliest parts of the city to do so), jump into shorts and go for a run at the little walking track near the building, and then come back for dinner. I'd open a bottle of Coca-Cola. (Coke had withdrawn from India in the 1970s because Indira Gandhi imposed punitive levies on multinationals wanting to do business in India; when trade restrictions loosened and Coke reentered the market in the early 1990s, my uncle -- and unabashed India critic -- refused to allow Thums-Up, the Indian version, in the house anymore). My 4-year old cousin Mikhail would stand next to me begging for some in his growly bear voice. I'd always give in, complaining more or less depending on my mood.

Instead of dinner, I'd eat bhel puri, essentially a snack food with puffed rice, sev, potatoes, onion, cilantro, tamarind chutney, and lime; I'd put it together from all the ingredients that Aunty always had on hand. Every night. It became such a habit that even now when I go back, twenty years later, Aunty always invites the whole family over for a special lunch at which she only serves bhel puri and other varieties of chaat (Indian street snacks): bhel puri, pani puri, sev batata puri, dahi vada... My mother had put the fear of god and food poisoning into my aunts when I came to India for that year -- "DON'T LET HER EAT STREET FOOD!" -- and so except for that one time (I swear!) that Sheila took me to the most famous bhel cart in the city, and maybe that other time that Nina and Vimla and Sheila took me for pani puri, and maybe a few other times when I escaped with my friends, my bhel puri consumption was limited to my mother-in-law's house. Poor me. 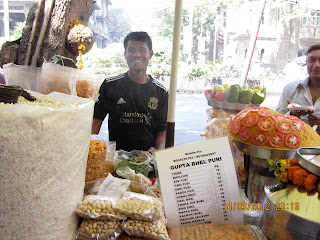 As for the food poisoning: the only time I got it really bad was when I went out to a "good" restaurant with some relatives. So humph.

This recipe requires a trip to an Indian grocer, although I was shocked to discover that my local Wegman's carried the more specialized ingredients in the form of "bhel mix" in their ethnic food section. Worth taking a look, if you have one near. At the Indian store, buy: kurmura (puffed rice), sev (chick-pea noodles), papadi (crisp little fried flatbreads), tamarind concentrate, and whatever else strikes your fancy. Or buy a package of "bhel mix" which has all the dried ingredients premixed. You can buy the green and tamarind chutneys ready made, but they're easy enough to prepare from scratch. Once you have the ingredients, it's pretty much a snap to throw together; the chutneys can be kept on hand for other uses, or for whenever the mood strikes for more bhel puri.

Green chutney: In a blender, combine 2 c. coriander leaves (cilantro), 1/2 c. mint leaves, 5-6 green chilies (you want the small Indian ones; if you use serranos, use just 2), 1 TB lime juice, salt, and just enough water to make a thick purée.

Okay, now assemble: In a bowl, combine 2 c. of kurama, 1/2 cup sev, 1/2 c. broken papadis, about 1/3 c. red onion, finely chopped, 1 small tomato, seeded and chopped (optional), 1/2 c. boiled potatoes, chopped, and 2-4 TB coriander leaves, chopped. Toss with 1 TB of the green chutney (spicy -- use your judgement) and 2 TB of the tamarind chutney; if this isn't enough to create a light coating on all the dry ingredients, add more, a TB at a time of each, until it's pleasantly moist but not at all soggy. Divide between 2 plates, top with a little dry sev, coriander leaves, a pinch of red chili powder, a pinch of salt if you need it, and a squeeze of lime. You can eat it with a fork, or take a whole papadi and use it as a scoop.

Goes perfectly with Coca-Cola. By the way.

Photos courtesy of my lovely aunt, Sheila, who is the one person I know who is willing to go on all the scavenger hunts I can dream up at a moment's notice, and who loves chaat almost as much as I do.

Anonymous said…
Yum yum yum. From a parent whose daughter goes to school with your daughter and knows you are my neighbor!
March 18, 2012 at 6:38 PM

The Invisible Flaneuse said…
Haha! Thank you Ms. Anonymous. I think that you and your daughter should come over for some bhel puri this week!
March 18, 2012 at 7:18 PM