Sindhi Curry, by way of my grandmother 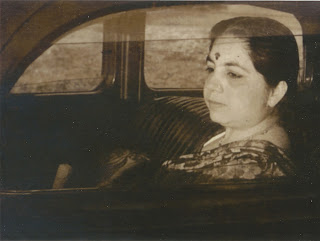 My parents got married in 1967, left India for the UK, and then ended up in Canada. They had met in medical school and fallen in love; theirs was the first "love match" in my mom's family of eleven siblings. They were from different religions and communities -- mom was Hindu, her family originally from Sindh, and dad was Manglorean Christian. They left, I think, because they wanted to work in better conditions in the west, but also because they wanted to escape the fact of their coming from different worlds, so to speak.


My dad's brother and sister had already immigrated to the west, but my mom was then, and is to this day, the only sibling to have left. She felt that distance so profoundly and talked of going back so much that my sister and I, when we were toddlers, were confused about where we lived. (She stopped talking about returning after that.)

The sign of that loss of place and that distance that my mother felt so acutely was my grandmother, who we called Mummy-ki-mummy -- "my mommy's mom," as my eldest cousin named her as a baby. The name stuck, at least for the elder batch of cousin-sisters and cousin-brothers. When the second wave of cousins started arriving, one of my aunts insisted that she be called Nani; I only found out later that in very traditional families a woman's name became replaced by being the Mummy-ki-someone. The self defined only by her progeny.

My mom created Mummy-ki-mummy in our minds, telling us stories of the life she's led, engaged at 9 to a man she'd stuck her tongue out at when he came to see her at the playground, married at 11, first of 11 children at 13, widowed at 42. These statistics don't tell the whole story, of course: the man she married, who took her to Bombay and with whom she fell deeply in love, was almost unimaginably progressive, insisting that his nine daughters all got university degrees. They would go for a drive each evening, alone, and park along Marine Drive, and my grandmother would smoke clove cigarettes and my grandfather would take photographs. I heard about all these things and also about how Mummy-ki-mummy learned to read English by reading the classics, how she struggled to support her children after her husband died, how good she was to her maid and the sweepers who came to the house, how she would say that if someone was bad to you you should love them even more in return.

We would write her letters when we were 4 and 5 years old, my sister and I. I wonder what she made of them, or if she could even read them given her English and our childish scrawls. But we wrote them religiously, with my mother looking over. I knew, at least, that I was writing them for my mom, really, and only secondarily for that mythical woman who lived so far away.

When we went to Bombay every two years or so when I was a child, we would stay with one of my aunts in Bandra and drive every day to Mummy-ki-mummy's flat in Dhobi Talao, near Metro Cinema. The apartment was maybe 500 square feet, two rooms plus an entry hall, kitchen, toilet room and shower room. Every time we walked into that apartment someone would remind us that my grandparents raised their eleven kids plus assorted parents and other relatives in that tiny place, and would show us how the kids sprawled out on couches and floors while Dadi and Mummy-ki-mummy slept in the one bed. My grandmother would hug us -- "Baap re" she would say, or "Arrey wah," or some other expression of wonderment -- and I remember how soft she was. I didn't speak Hindi, she didn't speak more than a few words of English. We would look at each other and smile. Luckily there were so many others around in that tiny apartment that I was pulled away moments later and didn't have to think of something more to say. 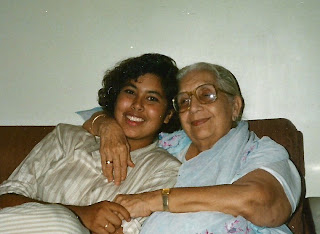 I was seven or eight; we were at my grandmother's apartment when everyone decided to go somewhere, and I was left alone with her. We sat and looked at each other for a while, smiling. And then she had an idea and called to Tulsi, her maid, to bring the rice in a big thali for us to clean. She taught me how to pull each grain of rice aside to make sure there were no stones or bits of dried grass in it. It was tedious at first, and then meditative; after a while, when I looked at my grandmother for approval or she nodded at my careful work, it became a way that we would communicate. After that we did this kind of work more often. I was less good at shelling peas because I was too intent on eating them straight out of the pods; I loved cleaning the mung dal because of the buttery yellow color. In retrospect, I think my grandmother made me clean things that didn't need cleaning, just because it was a way to pass the time.

If my grandmother was the person on which my mother focused her homesickness, Sindhi curry was the food which loomed in our family's imagination as the thing we could not have except at "home." My mother didn't bother trying to cook it in Canada until well after I started university -- until then, it was the thing she and my father (who had long since been adopted into my mother's family with a fervor that was equal to his foreignness) longed for. Every time we eat it in India we sigh that it never tastes the same in Canada; every time we make it here we long for the way it tastes there.


That ideal drove me to learn the technique, not easy when you have a mother and eight aunts who all believe they make the best one. My version's pretty good. The secret is to let the roux cook until it's rust brown.


They say you should make this on lazy Sunday afternoons, because it makes one quite drowsy. You'll need to make a trip to the Indian grocer to buy toor dal, cumin and fenugreek seeds, gram/chickpea flour (also called besan), curry leaves, and (if you'd like) drumstricks (fresh or frozen), kokum, and cluster beans (which are very small and flat, and look a bit like a juicy grass -- they go by the name of guvar).

A note about eating drumstricks: they're long, and fibrous, and look like, well, sections of a drumstick. You pick them up with your fingers out of the curry, and pull them through your teeth to get the pulp out, sort of like you're eating artichoke leaves. 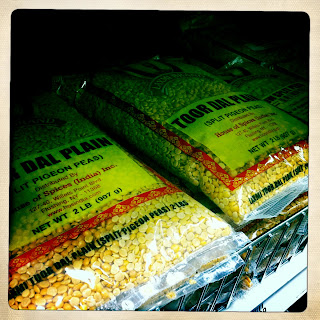 1. Boil 1.5 cups toor dal in 3 cups water until soft -- this goes faster if you have a pressure cooker; if you don't, plan on it taking around 45 minutes.


2. Heat 5 TB of canola oil in a heavy-bottomed pot; add 1 tsp cumin seeds, 1/2 tsp fenugreek seeds, a pinch of asafetida powder (hing -- I always leave this out), and 2 serrano chilies that you've slit down the middle, keeping top and tail intact.

3. After a minute, add 5 TB chickpea flour (called gram flour or besan in Indian food shops), and once that's been cooking for a minute or two add 1/2 tsp turmeric and up to 2-1/2 tsp red chili powder (use your judgement here!). You're basically making a roux now: fry the mixture until the chickpea flour turns reddish brown and becomes aromatic. 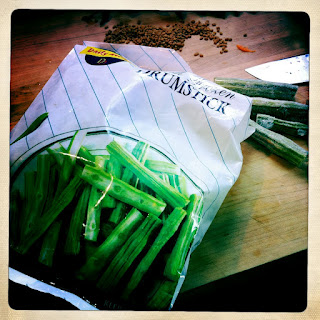 4. Now add the cooked dal, another 4 cups of water, and four canned tomatoes crushed in your hands. Stir well; the mixture will thicken somewhat. Then add the vegetables: in India, you would use drumsticks and cluster beans, but here (unless you can find these at your local Indian grocer) you might substitute okras and string beans or flat Romano beans. You could add 2 carrots and 3 small potatoes cut into 1 inch chunks, if you'd like. (There is a debate among my aunts as to how many vegetables you can add to Sindhi curry before it starts to taste like sambhar. I say go for it.)

6. Let this simmer on low heat for 45 minutes or so until the vegetables are very soft and the spices have melded. Add water, if necessary, to make it soupy, and adjust the salt. Squeeze the juice of one lime into the pot -- there should be some tartness to the dish -- and serve hot with basmati rice.

If you're feeling ambitious, serve with tuuk -- fried potatoes, sort of like french fries but yummier: Quarter some medium potatoes and boil till half-cooked. Drain, and then on a cutting board flatten down using the palm of your hand or a pot lid or a flat-bottomed glass until it looks like a ragged, thick disk. Season with salt and shallow fry in canola oil. Sprinkle with red chili and amchoor (optional; it's the powder of dried green mango, used to give a little tartness) and serve hot with the curry and rice. OR just make some french fries.

tokyobeauty said…
Very nice article, Rooni. Could relate to your Nani and those days. And thanks for the Sindhi curry recipe. Makes me want to try it again. I used to make it in Mumbai where I could get all the vegetables. 6 years ago.
Tomorrow I am gonna try making 'sai bhaji' here in Singapore...you got a family recipe? Nayantara
March 16, 2012 at 9:12 AM

It's wonderful to hear stories of your childhood - especially for me, because the last time we met I was a spoilt little brat of 12, and didn't have the appreciation for history! :) Warm memories and a great read! Loves Ambi
March 16, 2012 at 12:20 PM

Neha said…
Love Sindi curry. I used to live near a woman that makes the most amazing version I've ever had. I think out of Punjabi, Gujarati and Sindi curry.....Sindi in my fav. Will definitely try this recipe out!
March 16, 2012 at 4:03 PM

The Invisible Flaneuse said…
Come visit and I'll make you Sindhi curry to your heart's content.
March 19, 2012 at 9:48 PM