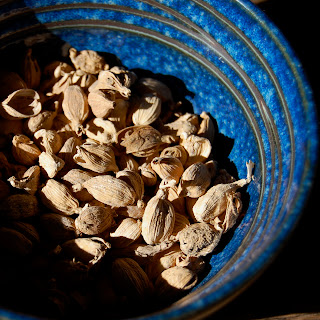 My mother has eight sisters and two brothers. Had, I suppose -- one of the brothers, the eldest child, died early in life, and one sister died in her twenties and her passing is felt, still, as a fresh wound by her siblings fifty years later. And recently, another of the sisters passed away -- my aunt Madhu. This is a story about her.


Madhu Aunty was the eldest of the sisters, the second of the siblings. She took care of all the children alongside my Mummy-ki-mummy (grandmother); I have no sense of what it must feel like to be only fifteen-odd years younger than one's own mother, what difference it made to one's relation to her, one's sense of the care and solace she represented for a child. My aunts recall how strict Madhu was, how tightly she would braid their hair, how well she kept everyone on track. When I heard her talk about it later in her life, I heard ambivalence somewhere behind her storytelling, a regret on missing out on childhood, maybe.

Madhu was beautiful. She epitomized grace, and moved like a cat. She was married very young (only nineteen) to a military man, my uncle Pribhoo, who eventually rose to the rank of brigadier general in the Indian army. Pribhoo was tall and straight and fit and handsome; they married and fell deeply in love. He was the rock around which her whirlwind spun; he always looked at her with an indulgent twinkle in his eye.

She was a favorite aunt to all of us cousins, partly because she always had chocolate hidden somewhere in her purse -- she was a self-described chocoholic -- and she doled it out to us despite our mothers' objections, pretending it was our big secret even though it was always done in a stage whisper. She thrived on joy, and she had an infectious laugh and a high-pitched voice, and was always encouraging masti (mischief). She preferred the company of the youngsters, and would make us to tell our stories and dance for her. Her generosity was legend, and even a little terrifying: if you admired anything she was wearing (she was incredibly stylish) she would quite literally take it off her back and give it to you, so we were all cautious in our praise.

She would write us cards and letters -- and later, texts and emails -- that were like puzzles to unravel, filled with puns and onomatopaeic spellings, occasional forays into French, and an almost rap-like rhythm. For example, a Facebook poem-message to her son about her troubles with sleep: 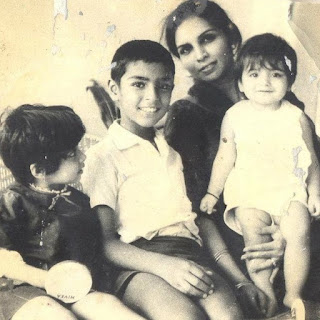 Early in her marriage, she moved around with her husband and her two children from base to base, ready to pick up and go whenever he was promoted or transfered. When my family traveled to India we would always go to whatever outpost they were stationed at. Being taken care of in these army compounds was unlike anything I had experienced at home: we had no bearers and servants, we didn't have jeeps waiting outside the door at all times in case we wanted to go anywhere, we didn't have young, smart officers stopping by to pay respects. Madhu played the role of officer's wife with panache, throwing elegant parties and making polite conversation, always gracious, always regal. I remember going with her once to buy pashmina -- the real stuff, not the pastel scarves that pass for it abroad -- and watched her subtle way of dealing with the shop-owners, playing along with the performance of civility, taking the tea they offered, taking her time to look at things, not expressing particular pleasure in their wares but showing them the utmost respect, even as she drove the price down and down without my even being able to figure out how it happened.

I used to joke that, for all the professional accomplishment among the sisters, their highest calling was moisturizing. Everytime we would get into a cab in Bombay, Madhu would pull out her canister of Nivea cream and pass it around, making us slather the goop on our hands and faces. She became a beautician at some point, and then taught jazzercise, and did a variety of things all in an attempt to burn some of her boundless energy. After her husband retired from the army and they settled in Pune, we cousins would go down and visit and be taken into her treatment room and made to wax and bleach and beautify; we happily played along, although I was the one who usually got bored first. Pirbhoo Uncle would feel sorry for me and take me out for walks so that I didn't have to sit through more beauty torture than I could bear.

When I was pregnant with my daughter, living in New York, Pirbhoo Uncle died of a terrible fight with cancer. Madhu fell apart, and shortly after came to stay with her son in New Jersey. It was summer, and despite the fact that I was seven months pregnant and buying a house and moving from the city to upstate, I'd try to drive out to see her almost every day to keep her company while my cousin and his wife were at work, so worried was I to see her in this state. It was hard to watch her grieving like that; she went from being so there in the world to being almost transluscent. There was an emptiness to her that wasn't there before. She was filled with regret, and loss, and stopped eating anything but a few bites of chocolate; she lived on air and chai, she said. She would walk and exercise and I, with my pregnant belly, would struggle to keep up; sometimes she would venture out on her own and walk so far that a friendly neighbor would have to pick her up and drive her back to the house. They say that one of the necessary stages of grief is to be angry, momentarily, at the person you've lost -- angry for their leaving you, for making you go through such pain. But Madhu Aunty's way of loving was complete and total idolization and adoration -- this is a kind of loving I cannot understand -- and so I think she could never be angry with Pirbhoo Uncle when she needed to, even for a moment; she took that grieving anger out on herself, and we stood by helplessly and watched her.

She died not long ago, and the family feels that loss so heavily. She was, as she was prone to be, upbeat and joyful at the end, at least more than one might expect; she would still write her crazy notes, she would laugh the way she used to though her voice was pulled to the limit by her illness, she got excited about arranging a marriage for her granddaughter. She did this all through her pain, and sometimes her real sorrow, and sometimes her exhaustion, and sometimes her resignation. She had been so strong for so long, but eventually just wanted to stop having to be strong all the time. That I can understand, probably better than I can understand anything else in life.

That summer of her mourning, when I had my baby, she came to visit me. She made me gobi parathas (flatbreads stuffed with cauliflower) and kokis, which I wolfed down with the rabid hunger of a nursing mother, and she would make herself elaichi tea -- tea with cardamom -- a hundred times a day. The cardamoms in my freezer were from the coffee estate in Mangalore, nobby and imperfect and gnarled compared to the kind you see in the supermarket, but incomparably fragrant. She was bowled over by these pods. I gave her a packetful -- what would I ever do with two pounds of cardamoms? -- and she took them back to India with her. We laughed at the idea of the re-importation of the spice, Mangalore to Mhow (where she now lived with her daughter) by way of upstate New York. But now, everytime I take them out of the freezer, I can't help but think of her and her endless cups of tea and the light that shone around her. 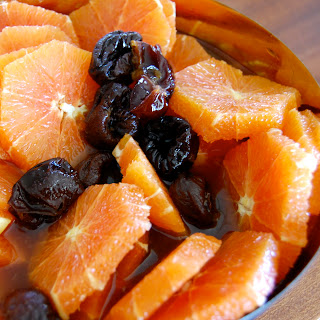 1. Remove the zest from 2 oranges with a vegetable peeler. In a saucepan place the zest and 4 Earl Grey tea bags. Pour 4 c boiling water over, and let the mixture steep for 5 minutes or so. Discard the tea bags.

2. Halve 15 or so cardamom pods, keeping the seeds that spill out. Add the pods and the wayward seeds to the tea mixture, along with 3/4 c sugar; stir till sugar is dissolved. Boil the syrum until reduced to about 3 c (10 minutes or so). Remove from heat and add 24 pitted prunes. Allow mixture to cool.

3. Discard the orange zest. With a knife, remove pith and peel from 8 medium navel oranges (including the 2 you zested before), or use 6 Cara-Cara oranges (a new variety that is half navel orange and half blood orange; I'm in love with these). Slice the oranges into thick slices, and add to the prune mixture, spooning the syrup on top. Let the fruit macerate, chilled, for at least 2 hrs and up to a day. Bring to room temperature before serving.

4. Serve over good vanilla ice cream. If I were smart, I would patent this as an ice cream flavor and make my fortune.
Email Post
Labels: cardamom dessert earl grey tea oranges oranges and prunes in cardamom tea syrup prunes

Ori said…
This was so beautiful. Your words captured her perfectly. I was crying the whole time whole i was reading this (and still am). I really miss her.
April 13, 2012 at 11:20 AM

twisty-scientisty said…
Having remembered her so full of joy, and knowing she won't ever really be gone, maybe crying is not something we associate with Madhu Aunty. <3
April 13, 2012 at 12:20 PM

Sharmila said…
Rooni you ve really written about Madhu so well..floods of memories...gosh.. probably should have signed off as she always did Mad hoo..... this page is beautiful.
April 13, 2012 at 12:30 PM

The Invisible Flaneuse said…
Sharmila, I just noticed that you're holding a Nivea can in the picture!
April 13, 2012 at 3:19 PM

Anonymous said…
Great Job hats Off To U, Keep It The way U Doing.

Happy Holi said…
Great Job hats Off To U, Keep It The way U Doing.