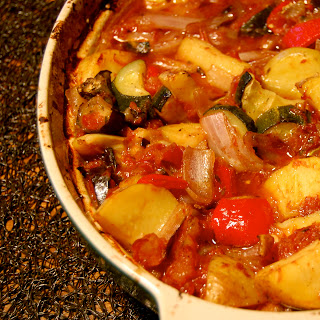 When I was in my second year of graduate school, the director of my program took a liking to me. He was an archaeologist out of central casting, a vague man, painfully shy, and determined to keep himself locked in an ivory tower. He had a funny laugh, though, and a good heart. I liked him, too.

Every year he would take a group of students to work on a dig that he directed on the island of Samothrace, the same site where the Winged Victory (the Nike of Samothrace) had been discovered in 1863. The dig was known as the Club Med of the archeology world because of the luxurious conditions for the students. I had no experience with archaeology, or even ancient art, but the director looked at me with a twinkle in his eye when I said I'd like to go and said, "I always say that if I have to choose between smart and nice, I'll always choose nice." And lo, I was accepted onto the crew.


My friend Coco went, too. We flew to Athens, and then met the rest of the crew to fly to Alexandropolis and take the boat to Samothraki, far to the east, closer to Turkey than to Greece. We oohed and aahed over the dolphins that danced around the ship as we came into the port, and were met by Taki, the man who ran the residence for the dig assistants. It was on the sea, with the hill in the back of us; up a path was the lab and museum where fragments of the buildings and sculptures were housed, and further up the hill was the site itself.

We would wake up very early and roll up to the dig, where we weren't in fact allowed to dig; that was the job of the (far more experienced) locals who had been coming every summer to pick through the dirt. Most of the diggers were old men, because the young had long since fled this remote and sleepy island, but there were a few younger men, too. They looked suspiciously at us, largely because we had no idea what we were doing and they knew it. We were to direct, and to make sure the men only dug down through one layer of dirt at a time; this would assure that we'd be able to tell when shards were deposited over the course of time -- layers of dirt equal eras of time, so to dig straight down is to erase any sense of history. I was incapable of telling the difference between the layers -- it just looked like dirt to me. I had a complete mental/visual block about it. I was generally relegated to the less important parts of the site. The men worked unbelievably hard; because there was no road to get up to the site much of the work was done without machines. It was hard not to feel like we were plundering the colonies.

What I lacked in archaeological skill I made up in entertainment value, at least as far as the director was concerned. Some tourists came by to ask what we were looking for; I glibly replied that we were about to pull up Nike's head. It seemed less funny when a TV crew from Paris showed up a few days later, tipped off by the tourists. Well, less funny to me -- the director found it hilarious. At every meal the rest of the student crew would block my way to the dinner table to make sure that I ended up next to the director, because it meant he would be in a good mood and they could relax into their conversations on the other side of the table. Sigh. 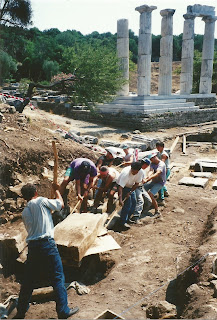 We would break for lunch and a siesta, when we would usually end up at the beach across from the residence. The women would go to one part of the beach, secluded and screened so that we could sun ourselves topless on the smooth rocks; we'd swim, trying to get as close as we could to the dolphins and avoid the jellyfish. Sometimes, down the way, we'd see an old woman slapping octopus against the rocks to tenderize it. We would come back to the residence to find a bag of figs that the director had picked from his trees and dropped off for us. One of our crew, a conservator who was quiet and kind and wise, would play his guitar and sing on a corner of the terrace, seemingly oblivious to our presence.

After our work in the afternoon we'd come back home and take cool showers and dress for dinner. We were told to bring proper clothes for the evening meal; our director, who spent the day dressed like a 19th century archaeologist in a khaki uniform and pith helmet, would arrive in a jacket and bow tie. We would assemble on the terrace for apperos (taramosalata, tzatziki, skordolia with hunks of bread) and ouzo. I hated the taste of ouzo, and asked Taki to let us have a Coca-Cola as an alternative, and so he would obediently bring down one single can of Coke that us non-ouzo drinkers would pass around, pouring a few sips into each of our glasses. The director put up with this break in tradition for a few weeks, and then put a stop to it when more people started drinking cola than ouzo. Just not done.

After a few weeks we all confessed to each other that we were all having intense cravings for spaghetti and meatballs and pizza; it took us a little while to realize it was because we had been smelling oregano that grew wild on the hillsides as the wind blew the fragrance down to our residence. The food we ate was amazing from a distance of years, but we were all so bored of it at the time: tomato, cucumber, onion, and feta salad; stewed flat beans with tomatoes; baked vegetables; roasted meats, fish occasionally.... That was about it. Once a week the meat was goat, which I came to love. We would go to the nearby village on Saturdays and find a taverna filled with Greek men (I don't know if I saw a woman under 30 the whole time I was there -- it was a very patriarchal society). We would eat hot french fries sprinkled with salt and oregano, and octopus, and chunks of lamb grilled and sprinkled with lemon juice. I learned to love lemons there -- we squeezed it on everything. It tasted of the sun and good health.

I came back brown like a nut. I haven't been back to Greece since, but writing this makes me feel I need to make that trip again.

1. Slice one small eggplant crosswise into 1/4 inch thick quarter moons; place in a colander and sprinkle with salt to let some of the juices release.

3. Rinse the eggplant and pat dry with paper towels. Put all the vegetables into a baking dish, along with 1.5 c diced tomatoes with juice, 1/4 c parsley, and 2 TB fresh marjoram or oregano (or 2 tsp dried), and salt and pepper. Cover with foil or a lid and bake in a 375 degree oven for 1.5 hrs.

4. Take the dish out of the oven. There will be a lot of juices that have come from the vegetables; drain this off into a small saucepan. Drizzle the vegetables in the dish with 1/4 c olive oil (be generous), a little more salt if needed, and return to the oven for 30 minutes. Reduce the juices in the saucepan set over medium-high heat until syrupy. Pour back over the vegetables before serving, along with some additional parsley.

In Greece, this dish is served half-warm or at room temperature, but I like it hot.