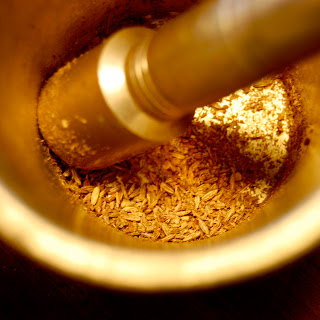 I live with a nagging feeling that I am doing things at least slightly wrong all the time -- that I don't quite know the rules. My grammar and punctuation, despite the fact that I write for a living, is just a bit off -- commas in the wrong place, who/whom problems, prepositions at the end of sentences, and other mistakes about which I am sadly unaware -- I have a fairly egregious grasp of idiomatic phrases, and my spelling is atrocious. There are moments when I feel like I relate to the English language in the way of a foreign speaker, even though it's my mother tongue and the only one in which I achieve anything near fluency.


This unease extends to other parts of my life -- I'm certain that I have terrible table manners, for example. I mean, I don't think I'm disgusting or anything, just that I'm a bit uncouth. I relish eating with my fingers and gnawing flesh off bone and dipping bread in the communal plate. I never really pay attention to which fork I'm supposed to be using. I was at a work dinner some time ago, and was "hosting" a table of eight or nine guests. The plates arrived, and I was happily chatting away with the person on my right when the person on my left gave a slight cough, and then said "Ms. Flâneuse, we're waiting for the ranking woman at the table to take the first bite." It took me a few seconds to realize that I was the ranking woman at the table. I dutifully swallowed a forkful. That was pretty much the last bite I took that evening, though -- I usually allow myself a certain quota of gaffes per occasion, and I figured I'd probably end up using them up on conversation so couldn't risk wasting any on food.

I'm sure that some of the secret standards of comportment I'm scared of transgressing are figments of my imagination, rooted in my own insecurities about not quite fitting in. But my daily trial is a fear of operating in a world in which there are a million rules that I don't know about; I'm more than happy to flout standards and step on toes when it's important to me -- god knows I've done that often enough, and paid the price -- but I want to know when I'm doing it. When I moved to New England recently, I was overwhelmed by this sense that I hadn't been issued the operator's manual for life, but that's probably because there are a lot of unspoken rules here; as culturally flexible as I imagine myself to be, having lived in Canada, India, the US, and France, I think this is one culture that I'll never really figure out, because it seems to sustain itself on not letting others in on its secret handshakes and gentleman's codes.

Growing up the child of immigrants, no matter how assimilated they were determined to be, leaves me in a strange position of not knowing what parts of my behavior come from the Indian side and what parts come from the Canadian side of my experience. The way we ate -- our strange melange of table manners, neither polite in India nor in Canada -- was reflected in what we ate. Our holiday tables -- Christmas, Thanksgiving, Easter, all of which were enthusiastically celebrated by my Hindu mom and treated with indifference by my (in name only) Catholic dad -- always had a mixture of Canadian food and Indian food on it. We ate our chicken curry with our hands and our turkey with our forks and knives, unless, that is, we did the reverse. When your turkey was stuffed with a Manglorean stuffing, fragrant with ginger and cilantro, and the potatoes were mashed with tumeric and curry leaves, the question of whether you were to eat with forks or fingers became sort of irrelevant.

Neither Canadian nor Indian, but also both Canadian and Indian -- this was how my parents cooked when I was growing up, and how a lot of immigrants from all sorts of places cooked at that time: you substituted ingredients, modified methods, and took advantage of new foods and techniques and tools when you came to a new place. Until pretty recently, my parents couldn't get curry leaves, or tamarind, or all sorts of ingredients that their family recipes depended on, even though our local grocery store in the 1970s did carry pappadums alongside the chocolate-covered grasshoppers (a fact that still blows my mind). And there were no traditional recipes for broccoli, for example, or turkey. This strange culinary landscape didn't stop them from cooking, from trying to evoke (if not recreate) the flavors of their youth, even if they were making dishes that would have been unrecognizable to their parents. And it almost always tasted good.

It may be for that reason that I rarely have the desire to find the most authentic version of whatever cuisine I'm interested in -- I don't fetishize authenticity or purity or historical accuracy in my food or my cooking. I'll happily make paella with Japanese rice, or make Thai Massamman ("Muslim") curry with pork, or corned beef hash with a little green chili thrown in (as my dad used to do). And if I think about it, some of my favorite cuisines are those which are historically very hybrid -- Thai, Indonesian, Peruvian, Malay, etc. There are times when a willful culinary melding of cultures ends up feeling more like a miscegenation -- how many post-Thanksgiving phone calls do I remember where my mother had to patiently explain to the irritated woman on the other end of the line that, no, there wasn't really a way to turn leftover turkey into curry? and what about that takeout place in Soho and their stomach-turning combinations of foods wrapped in Indian dosas? -- but, you know, bad food happens.

With this in mind, I present two of my dad's recipes, things that you would never find in India (or, really, outside our own house), but which straddle the gap between where dad came from and where he went to, along with one of my favorite Madhur Jaffrey mash-ups. 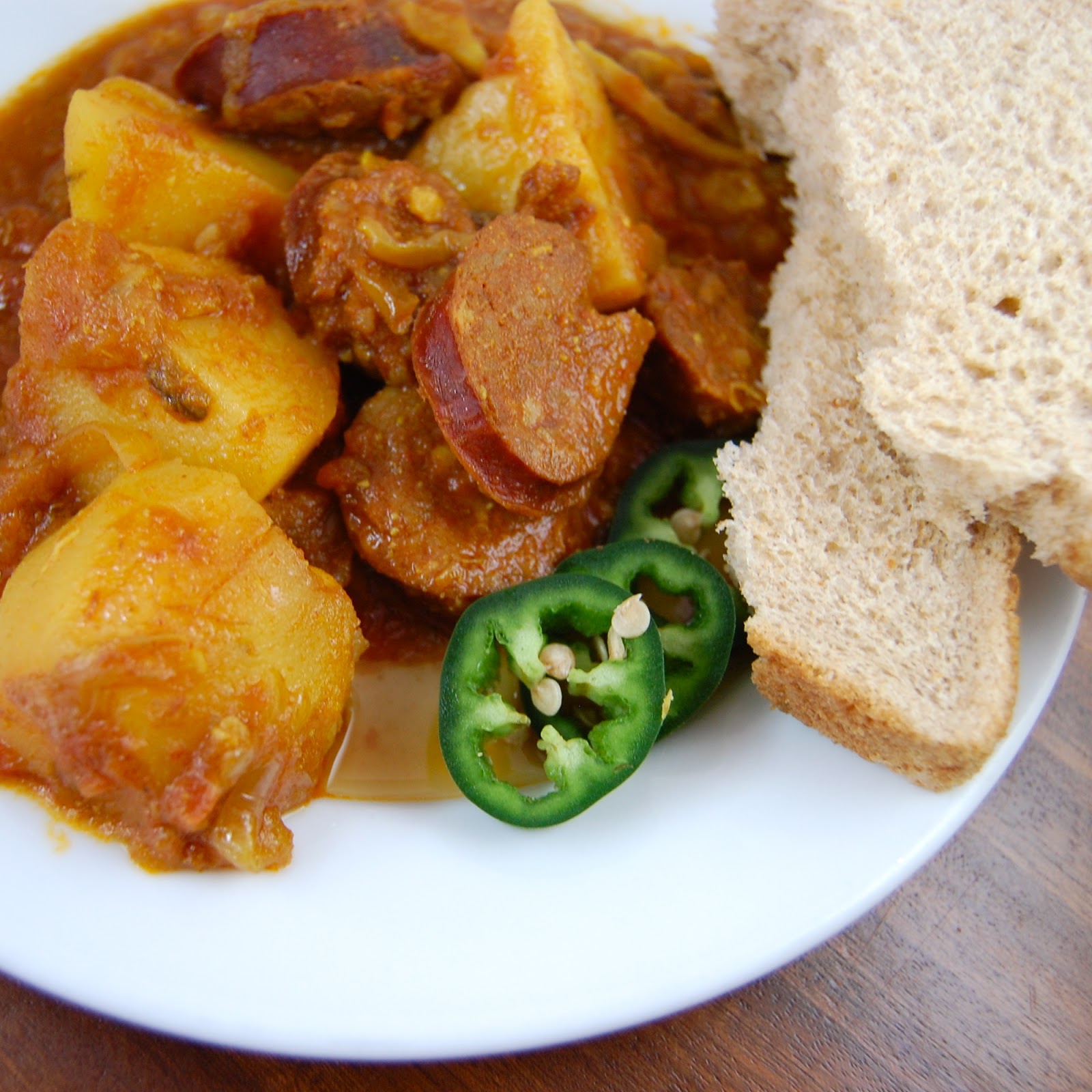 Mangalore, where my dad's family comes from, was taken over by the Portuguese as a major trading port on the Malabar Coast in the 16th century and was the destination of a lot of Goans fleeing the Portuguese Inquisition in Goa in the 17th century, and has a lot of Catholics as a result; a lot of dishes from the Manglorean Catholic community are based on their conquerer's cuisine. This is a dish that was probably, for my dad, reminiscent of preparations of Goan sausage and a way of taking advantage of the great Germanic sausages made by the Hutterites who lived in massive agricultural colonies in Southern Alberta. Sounds unlikely, but total comfort food for me.

1. In 1 TB canola oil, sauté 1 sliced onion, 2 coins ginger, 4 sliced garlic cloves, and up to 2 chilies, chopped. When soft, add the spices: 1 TB ground coriander, 2 tsp ground cumin, 1/2 tsp turmeric, up to 1 tsp red chili powder, and 1/2 tsp salt. Sauté for a few minutes, then add 1 c chopped tomato (fresh or canned). When tomatoes are broken down, add about 1/2 c water, and let everything simmer until it's quite homogeneous and thick and saucy, 20 minutes or so. Taste for salt.

2. Now, add the sausage: a ring of good kielbasa (3/4 lb) or the same amount of linguiça or churico (Portuguese sausages which are pretty closely related to Goan sausages, and which I can find, improbably enough, in my local Stop and Shop). The sausage should be cut in thick rounds. Add another 1 c water and (if you'd like) 2 potatoes, peeled and cut into largish chunks, and simmer for 20 minutes, until the sausage has had a chance to stew and the potatoes are cooked, adding more water if needed.

3. Serve with hot rice or French bread with a good handful of coriander leaves as garnish.

This is a Portuguese-Indian concoction used to stuff roast pig. It's the recipe dad always used to use for our Thanksgiving turkey and occasionally for our neighborhood barbecues when he dug a pit and stuffed a suckling pig that was gifted to him in lieu of payment for medical services by grateful Hutterites. When the pig didn't burn to a crisp due to an overenthusiastic use of hot coals (which happened more than once), it was delicious.

1. Boil the turkey gizzard, heart, neck and liver until cooked and cut them into a small dice. Cut one loaf of bread (including crust; you can go classic North American dense white/Pullman, or a French or Italian loaf) into 1 cm pieces and dry out in a 350 oven for 20 minutes or so until dry and a bit crunchy, but not burned (!). Mince 4 onions, 4 green chilies, 1 piece ginger, a handful of mint leaves.

2. In 2 TB canola oil and 2 TB butter in a large skillet, brown the onions, and then add chilies and ginger, mint, organ meats and 1/4 c yellow (Sultana) raisins. Mix contents of skillet into bread, season with 1 tsp ground black pepper, 1/2 tsp allspice, and 1 TB red wine vinegar. Adjust salt, and then stuff your bird and roast as usual. 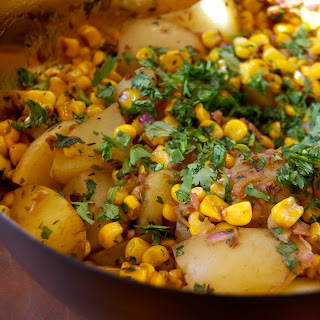