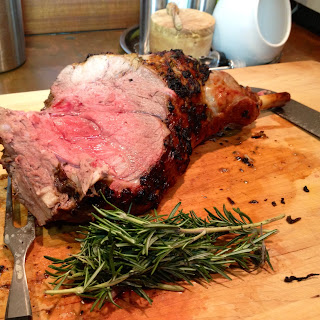 When I was searching for a dissertation topic, I asked one of my mentors, a curator at MoMA, if it was worth pursuing a topic in post-war American art. He said to me: "Why would you want to do that? You'd spend your PhD writing years in an archive in Washington DC instead of in Paris or Rome or someplace worth being." He was mostly joking, but not really.

I ended up in Paris; I was no fool. The first time was in 1995. Ex and I had the great good luck of renting an apartment in the Fifth Arrondissement.
The apartment itself was blond and Frencher than French in an airy and casual way, mostly because it was owned by two ex-pat Americans who were determined to live like Parisians. It looked out over a treed courtyard; James Joyce lived there in the 1920s, we were told. It had huge windows and beautiful wrought-iron window grates, and a kitchen that was the size of a closet, long and narrow and tiny. The knives in the kitchen were carbon steel, and would turn black when you used them to cut anything acidic; the toaster had its heating elements on the outside, and had wiring dating from the 1940s, and it was quite amazing that I didn't burn down the building using it. The French (and the Americans who emulate the French) take a certain pride in the shabbiness of their kitchens and their cooking tools, as if the sign of a cook's prowess is the ability to turn out a beautiful meal in the worst possible conditions.

The owners of the place, a painter of quasi-Surrealist cityscapes and a former dancer, products of Bohemian New York, lived an echt-Paris life, the kind that Parisians no longer lived. Ex and I arrived at the apartment after a sleepless night on a transatlantic flight and were rushed out again by the painter so that he could introduce us to his favorite wine bar (and buy an hour or two more for his wife to pack). We tucked ourselves into the tiny restaurant and found ourselves eating sautéed rabbit with olives and two glasses of a lovely Côtes de Provence in a state of fatigued delirium; I can't remember what what it tasted like, but we liked it enough -- the amiable owners as much as the food -- that we became loyal customers. The next day the dancer -- did I mention that these were two of the most handsome people I'd ever met? -- took us around the neighborhood to introduce us to her butcher, baker, candlestick maker, and a thousand other little shops, so invested was she in the fiction that one couldn't survive in Paris without having personal relationships with the people who sold you your food. Never mind that most actual Parisians were mainly found in the local Shopi supermarket.

After they left us to our own devices, ex and I adopted some of their suggestions -- going to the markets at the Place Monge and the Place Maubert every day, patronizing the great wine shop by the Pantheon run by the hippie couple who insisted you could never get a hangover from organic and sulfite-free wines, and going to the boulangerie with the unbelievably snippy women with tight lips and perfect baguettes. But instead of the fromagerie with admittedly exquisite cheeses run by two Front Nationale sympathisers, we found one that didn't cause us nearly as many ethical pangs, and instead of the perfectly proper boucherie with its poulets de Bresse laid out like gold bricks and costing as much, we found a shop opened recently by an ex-merchant marine whose prices and friendliness were more our speed.

If looks were destiny, this man could really only ever have been a butcher: he was short and blond and built like an oak tree, with Popeye forearms and the ruddy glow of health. I would come in and he would beam and say hello, and no matter the line of waiting customers he would take his time understanding my pathetic French and my ignorance of French cuts. He would ask me to describe in detail what I was making, especially if it was something Indian or otherwise exotic, so that he could recommend the best meat; he would laugh at my inability to judge how much I needed, which inevitably resulted in my insisting on buying about twice as much as he offered. I was a good customer. He was always happy to see me.

Over the years, no matter where in the city I was living, I would go back to this butcher -- at first, it was to see if he would remember me, so anxious was I to know if I had made the least mark on this city, and later it was to say hello to someone who seemed an old friend even though I had only ever spoken to him for minutes at a time, usually about côte de boeuf or magret de canard. Each time I showed up, he would instruct his wife -- a homely, shy woman who had the look of someone who felt invisible even though she sat behind the cash register -- to bring out their latest infant, which she would obediently do. At last count there were five, all squalling and snotty, but I haven't been back since 2005, so there could easily be five or six more. After some years of seeing us come in to his shop without a baby in tow, he asked ex and I why we hadn't had any kids yet, and offered to give ex a few tips if necessary. When we finally had a child, we toted her to the shop to prove to him that we had figured it out. 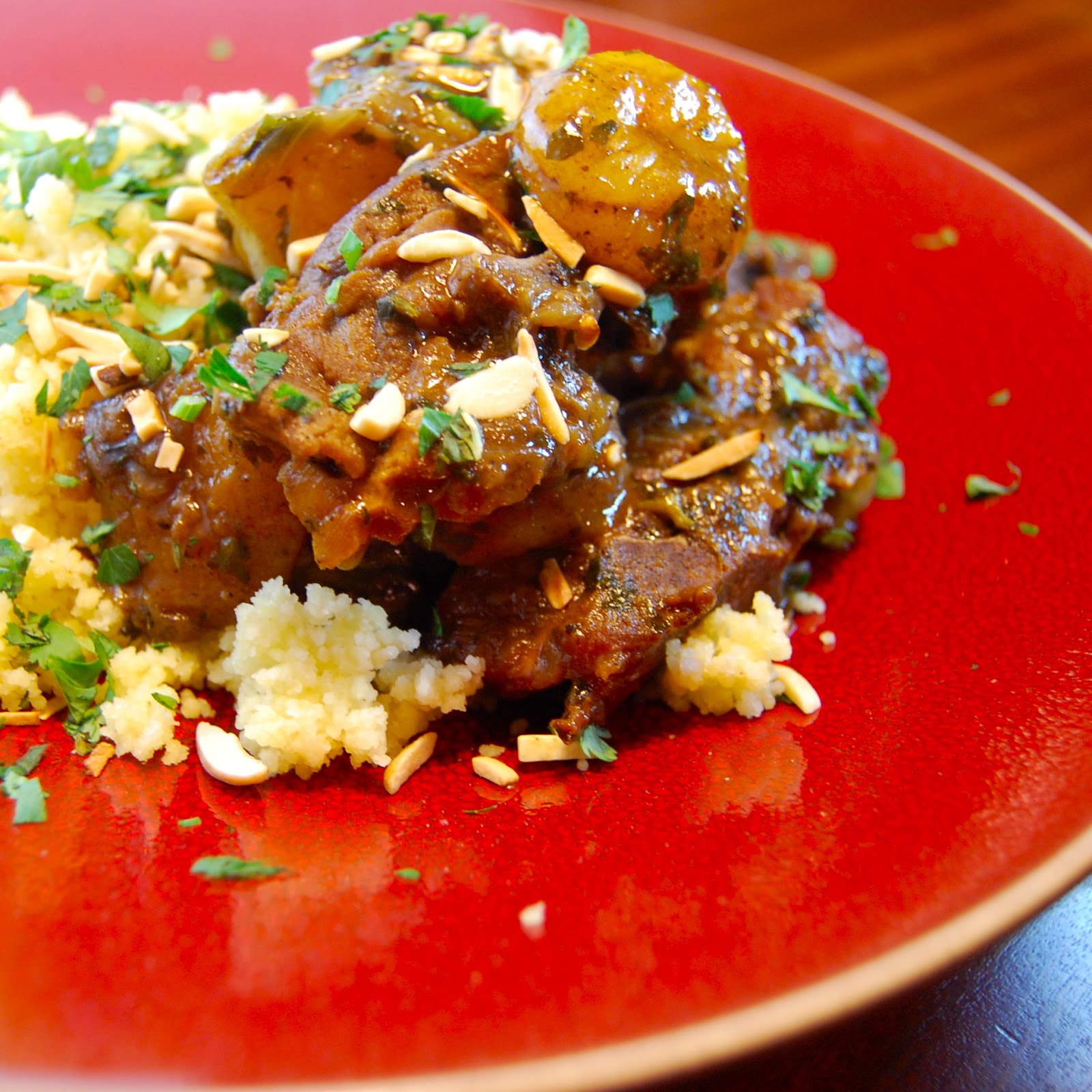 I love the North African tradition of mixing meat with dried fruit and spices -- sweet and savory combine in an unctuous sauce that is pure deliciousness, and a sprinkling of herbs and toasted almonds at the end provides some freshness and textural contrast. This is a simple tagine that is more than the sum of its parts -- something I crave on a regular basis.

1. Heat olive oil in a heavy pot. Season lamb with salt and pepper, and brown in batches till well colored. Remove to a plate.

2. Add onion to the pot with a pinch of salt and sauté until golden. Add the spices to the pot (cinnamon, ginger, cumin, chili, and saffron) and stir around for a few seconds. Then add the lamb back along with the water or broth and 1/2 tsp salt (if you're using salted broth, you'll probably want to add less salt at this point). Simmer for 1 hr, covered, adding more water if necessary to keep it simmering without sticking.

3. Add 1/4 c chopped parsley, 1/4 c chopped cilantro, dried apricots, and honey, along with 1/2 c more water if necessary; you want enough liquid to keep it from scorching, and to create a thick sauce. Simmer an additional 30 minutes, partly covered, until lamb is very tender and the dish is quite unctuous and thick. Taste for salt salt. Squeeze the juice of half a lemon over and mix well.

4. Serve over couscous garnished with toasted slivered almonds and the remaining cilantro and parsley.


Roast Leg of Lamb with Garlic and Herbs

Roast lamb is one of my favorite dishes, and is incredibly forgiving -- it's tasty anywhere from medium-rare to well-done, and it's unevenly shaped so that you'll get a bit of each level of doneness to suit everyone's taste. I don't bother making a pan sauce when I do lamb; I find the herbs and lemon from the rub provide enough flavor, and meat is always tender and juicy.

1. Make a rub by combining the garlic, salt, pepper, lemon zest and juice, olive oil, and herbs in a small bowl. Trim excess fat from a bone-in leg of lamb (don't go crazy; leave a thin layer intact) and rub the mixture thoroughly over the meat, squishing it into all the nooks and crannies. (If you're using a boneless leg of lamb and rub it all over with the herb mixture; tie it with kitchen string into an even and neat "log" and then proceed.) Place it in a roasting pan and let it sit for at least one hour and up to four, uncovered, in the fridge.

2. Take out the lamb and let it come to room temperature before cooking. Roast in a 425 degree oven for 30 minutes, fat side up, and then turn the heat down to 350 degrees and let it come to an internal temperature of 130 F at the thickest part of the meat. If you're doing a bone-in leg, it will take less than 1.5 hrs; if you're doing a boneless leg, it will be ready in about 45 minutes. Let stand for at least 15 minutes before carving.
Email Post
Labels: butcher lamb tagine main dish markets meat non-vegetarian Paris recipe roast leg of lamb

sheila syed said…
I always knew you were a great writer. Remember the line you wrote for Shyam Ahuja once. He still freaks out on it.
I love all your blogs, the one of Madhu was the best you saw the whimsical things that made her so special.
brilliant Roony
April 23, 2012 at 12:44 PM

The Invisible Flaneuse said…
Thanks Sheila! Sometimes I wish I could take up copywriting again. If only I could get Munawer to rehire me!
April 23, 2012 at 6:53 PM

Anonymous said…
Your posts are so evocative. Will never meet this butcher, but through your writing, it feels as if I already have.
April 16, 2013 at 3:08 PM

The Invisible Flaneuse said…
Thank you! That's a lovely thing to say. Everyone should have a butcher story. Unless you're vegetarian, I guess.
April 17, 2013 at 2:47 AM