The Pleasures of Touch 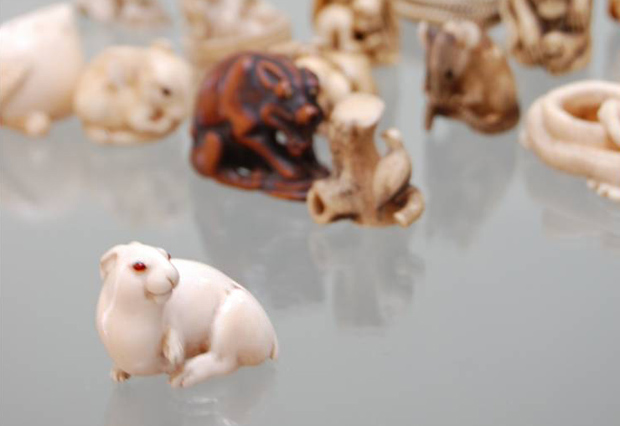 I've just finished a fantastic book, The Hare with Amber Eyes by Edmund de Waal. De Waal is a descendent of the great, late-19th century art collector Charles Ephrussi; he is trained as a potter. The latter is as important as the former in this tale, which traces a group of objects -- tiny Japanese carvings called netsuke -- from the time Ephrussi acquired them to the time they come into his possession.

The book follows the rise of the Ephrussi family from grain traders in Eastern Europe to powerful bankers in Vienna and Paris; Charles's life as a dandy, a man-about-town, an art historian, and a collector of Impressionist painting and Japanese objets d'art; the migration of the collection of netsuke in the early 20th century to another branch of the family, fabulously wealthy Viennese Jews; the persecution of the Ephrussi family under the Nazis, which resulted in the loss of their fortune, their possessions, their family, and their collections; and their eventual escape from Austria and the consequent dispersal of the family on three continents. The only things that remain of this history are a few paintings recovered by the family after the war, and, miraculously, the collection of netsuke, thanks to a loyal Gentile servant. They travel back to Japan with de Waal's uncle, and eventually wind up with de Waal. His mission becomes to move backwards in history, to recover the threads that wove these objects into the life of a family.

The tale is fascinating. For me, as an art historian, it has added resonance. Not simply because it is perhaps the best account that exists of Charles Ephrussi's position as a collector and noted japoniste in late 19th century Paris, but because it gets close to the impulse that drives the collector, I imagine. For Ephrussi, it was a kind of love, to be sure, but it was complicated love: at first, motivated by social ambition, then deepened because it was an interest he shared with his married lover, and furthered by his scholarly interest in art history. And on top of this was the desire evoked by the objects themselves: tiny and smooth from constant handling, the netsuke were carved by masters and by amateurs, kept in pockets and on sashes to be fingered and fondled, worried over and caressed.

In the end, it was de Waal's ability to describe the pleasure of touch that struck me most. We're used to writing about sculpture and painting in a way that suggests our eyes can touch, that we can visually imagine the slightly oily raggedness of an impastoed canvas, or the cool smoothness of the skin of a sculpted figure. But the netsuke are meant to be held and played with, and de Waal describes the particularity of that experience very precisely, pointing out, for example, the effect of Charles Ephrussi's decision to display them in an horizontal vitrine, seeing them from above, and having to pick up each one in order to find the bauble he was searching for.

It must be that de Waal's experience as a potter makes him especially sensitive to this experience of them but it's hard not to think that de Waal imagines that in touching these objects, he is holding his parents, his grandparents, his cousins and second cousins and grand- and grand-grand parents, aunts, uncles -- everyone who he has lost to time and to the Holocaust -- near. Its not touch as an individual experience, but as an inheritance. Touch as a form of memory, a form of history. A form of love.