Quitting: it has such a terrible sound, no? The hard k sound at the beginning, the spit of the double t's in the middle, and the rise of the tongue to the palate at the end. It's not a pretty word. 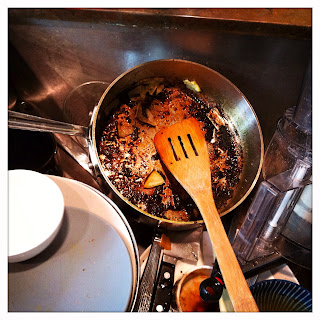 I quit my career last week. Which is not to say I quit my job -- I had no (single) job to quit, not for a while. I have been the definition of the precarious worker for the past eighteen months, part of the so-called creative class who has been fooled into thinking we are living our dreams of tailoring our careers to our lives when we are, like everyone else, tailoring our lives to our careers. Just with less security, no benefits, and uncertain futures.


But that's not what I quit. When I say I quit my career, I think I mean this: I quit the idea that I am a professor, an academic. I don't want to define myself that way anymore. I've done what I was supposed to do: got my PhD, published my books and articles, achieved tenure, made a name for myself. And now I'm doing something that's not part of the standard narrative of what it means to be a prof: not dying with my boots on, as professors are notorious for doing, and not retiring, but quitting.

A few months ago, at an MFA program in which I teach, I was asked to stand up in front of the students and tell them about myself. I said "I don't want to tell you what I do," and was met by incredulous titters, maybe even some confusion or faint anger at my refusal of the question. I don't want to have to put a name on what I do, I said. I don't want to call myself a professor, I certainly can't call myself an artist, and to take on the label "intellectual" would be just more pretentious than I could bear. Nor do I want to do nothing. I just don't want to name it, that thing or constellation of things.

What are those things or constellation of things, then? Well, as one of my friends says, I do Facebook. I do this blog. I chair panels, and I give lectures, and I teach, sometimes. I write -- mostly about art, sometimes about food, sometimes about other things -- but I sometimes balk at calling myself a writer. When I lived in the Bay area, everyone I met told me s/he was a musician or an artist -- everyone, I promise -- and only did their other jobs (doctor, lawyer, butcher, baker, candlestick-maker) to pay the bills, which was in this case less a reflection of how hard it is to make a real living as an artist or musician than it is of how everyone in that part of the world insists on seeing themselves as a "creative type," even if their only claim to being a musician is getting together with their buddies in their garage to bang out a few songs once a month or so. I feel that way about calling myself a writer: isn't anyone with a keyboard and access to a free blogging site a writer these days? I can't figure out what the word means anymore, let alone have any way of knowing if I have a right to claim it.

So: to the question of what I am, professionally, I have no idea. To the question of what I want to do, I say this: I want to think. I want to think alone, reading books and newspapers and magazines and looking at art and images and things and spaces. I want to think with people, in conversations and on Facebook and in roundtables and in classrooms and in intense exchanges where we grab onto an idea and chew it and ingest it. I want to keep searching for ways to make my politics jibe with my way of (making a) living, but I also want to give up the idea that the way I pay the bills must be "pure": that it must not feed the machine that puts us all in the state of precariousness. I had that fiction as a professor, that my ivory tower was a space of politics. Jerry Sandusky, student loans, Aaron Schwartz, adjunct exploitation: I can't pretend anymore that being an academic is any better or worse than working in the oil industry or schilling subprime mortgages -- I mean, it is better, but only by degrees. Doesn't mean it's not worth doing. It just means that I can console myself in imagining that stepping away from it, towards something else, doesn't mean I'm making a deal with the devil. Quitting is not compromising, necessarily.

The first time "quit" was used in English to mean "quitting a job" was in 1923 -- before that, it was often used as an adjective, to mean "freed," or "unencumbered": I am finally quit of that terrible task. Released from obligation, charge, or penalty. Liberated, freed, unburdened. Delivered.

Released. Released not from the terrible thing of being an academic -- it's a great job, full of pleasures and honors and purpose. But released from my own failure to imagine a different path for myself, a different story.

I am quit of the idea of having a career. And for the first time in two years, I can sleep through the night.
Email Post

William Cullum said…
Congratulations! I quit the idea of having a career two and a half years ago and have never enjoyed my work more. I have everything I want so I don't want for anything. I can't recommend it enough. Enjoy your life. You now have the space to do it.
May 12, 2013 at 5:13 PM

Sharmila said…
Lovely blog Rooni - very meaningful and beautifully written - I am chewing on every word and will read it again ...
May 13, 2013 at 2:34 AM

Vimla said…
Quitting doesn't mean that you cannot start from where you quit. Maybe for a pessimist it would be having no choices but you are a veritable optimist I am sure.

So a new beginning and reinventing oneself never hurt anyone!

Round Rabbit said…
Woo-hoo! Great post! Quitting takes more courage and strength than just about anything I can think of. I've done some epic quitting several times throughout my life and each time it was terrifying, intimidating and the best damn decision I ever made. Quitting is just the beginning. Congratulations!
May 13, 2013 at 3:03 PM

Lisa Hatch said…
Thank you Aruna, for the gift of your thoughts and your words. You've just articulated and clarified a journey that I've been on as well for the past 2 years. You've got a tremendous blog. It's filled with so much honesty, heart, family, food and courage in your stories.
May 13, 2013 at 3:27 PM

Unknown said…
I like and agree with all the comments, I particularly love Kathryn Kent's words..'fierce, beautiful you...' I do not even know what you are quitting, but what you have to say resonates with me, is relevant and has meaning...
Thank you!
May 13, 2013 at 10:18 PM

riri tea said…
Your writing and thinking is simply enchanting. Bravo for living your truth!
November 6, 2013 at 8:40 PM