Thoughts While Not Arranging My Bookshelves 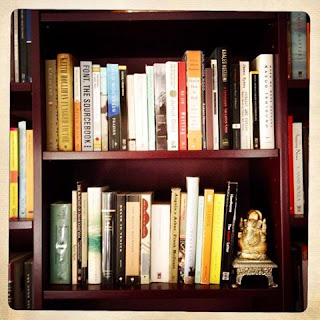 My two favorite methods for arranging books on bookshelves, as relayed by two of my favorite people:

When I left job two years ago, I found myself having to move thousands of books from my office into my house. I had bought a simple, old farmhouse the year before and renovated it; it had my first-ever all-to-myself bathroom, the kitchen of my (very modest) dreams, and just enough shelf space for my cookbooks and my relatively small collection of fiction.

I had done this deliberately. While I was married, when we, together, had twice as many books and half as much space in our New York City apartment, I felt overwhelmed by them: floor to nine-foot ceiling in the bedroom, in the narrow hallway, in the living room, in the guest room. We accumulated them during grad school and after -- mostly my ex did, that is, spending our pitiful allowance at The Strand downtown or at Gryphyon on the Upper West Side. I would ask where the money went; at least twice he was so scared to admit he'd bought more books that he actually told me that he'd lost the cash, which made me scream at him and cry in frustration.

When he did admit to me that he had bought more books, it was often with beaming pride: "Look at this one! It's worth at least $350 and I bought it for only $5!" I would look at him with the same cruelty as Jack's mother faced with magic beans and say, "Great! Let's sell it!" and watch his face crumple, because of course I was essentially asking him to sell his newborn, these volumes meant so much to him. Eventually, when money was more plentiful and anger much diminished, we began calling books "magic beans."

The organization of the library was a fragile thing in our relationship. I was too haphazard in my shelving, so he took over that duty, not unlike his having taken over packing our suitcases and hanging up the clothes that I let pile up on the chair, discarded at the end of every day. It was one of the ways he took care of me.

The shelving logic had to be intuitive and clear and efficient so we could both find the things we most needed to write our dissertations and (eventually) our own books. Even so, I would often end up phoning him at the office to ask where to find something. "Living room: third row, second column from the end." He had a photographic memory of those shelves.

Whenever our relationship got rocky, he would rearrange the bookshelves. This drove me crazy -- it had taken me so long to work out the last system, to finally know where to find things without having to think too much. But after a particularly bad fight, the books would come down, piled in insurmountable mountains in the middle of rooms and in hallways, and would be put back on shelves in a new order at a maddeningly slow pace. In one of these bouts of reorganizing, he marked every book we owned with it's Library of Congress call number before shelving; for those books which had not been assigned an LOC number, he did research to determine the theoretically correct call number for it. It was the most effortful example of passive aggression in the history of passive aggression -- all his anger at me expressed in the most infuriatingly effective way, through an act of disorientation. I would be left clueless about the location of my own books, sometimes for weeks, until I figured out the nuances of the filing system. And this without even taking into account the injuries sustained from tripping over piles of books during the days (months) before they all got put back on the shelves.

We always joked that we could never get divorced because there would be no way of dividing up the books.

In the aftermath of the dividing, I know we both wished we'd heeded our own warning. We didn't fight about the division of property, cash, child custody, any of those things that make divorce lawyers rich and ex-spouses bitter. But the fight over books left us emotionally bruised, hoarse from screaming, raw from tears. All the everything of divorce ended up in those pages. I got the lion's share of the library, I will admit, through the sheer force of my anger. I knew that the only way I could repay the pain that he had caused me was to hit him where it really hurt. I'm not proud of this. But I'm not unproud, either.

Now, in my house: bookshelves hastily erected, books slapped up on shelves, and still piles gathering dust in the hallway because I've run out of room. Now that I've left academia, now that I write about things other than art (although not entirely other than art), so much of my collection seems like the remnant of another person, one that I can remember clearly but can't really relate to entirely. Did I really read that book? Did I really want that one? It doesn't even matter that I can't get to the books at the bottom of some of those piles -- why would I ever need to, now?

Now I covet other things to read. And, as ever, I'm left figuring out how to make room for those new tastes, that new me.

Christine said…
*The organization of the library was a fragile thing in our relationship. I was too haphazard in my shelving, so he took over that duty, not unlike his having taken over packing our suitcases and hanging up the clothes that I let pile up on the chair, discarded at the end of every day. It was one of the ways he took care of me.*

omg, Aruna, I love this paragraph. Especially, this last line which has prompted me to meander in my head through those important past relationships and reflect on the same.

tanuja kothiyal said…
Really loved reading this one....what keeps us together and what pulls us apart!
November 30, 2013 at 11:38 PM