No Knead To Thank Me (You're Welcome) 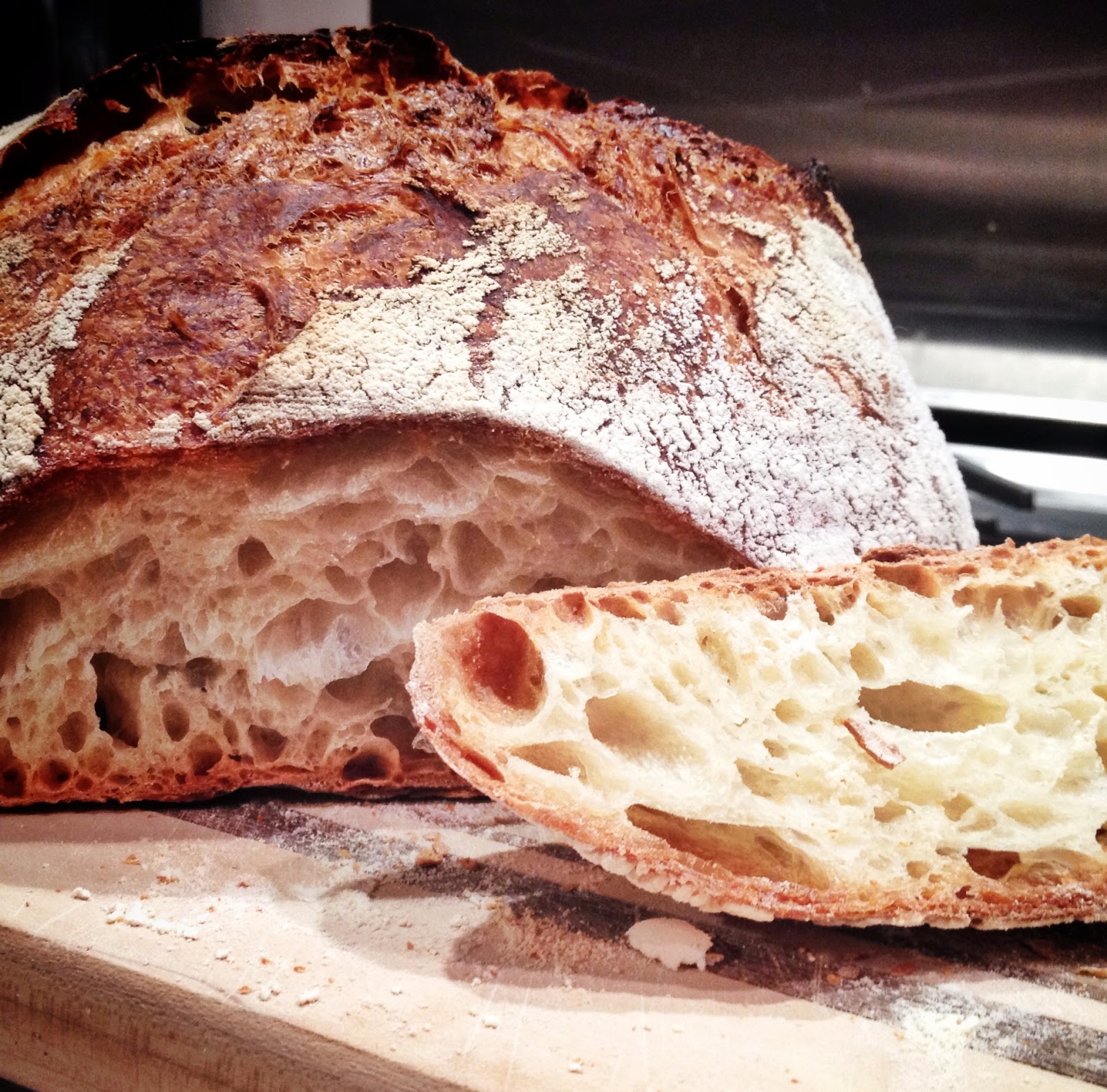 I've written previously about my utter incapacity to make decent bread -- somehow I don't have the touch, or I have too much touch. I would make dough and it would rise beautifully and then the minute I'd put it in the oven... plouff, it would collapse into a dense mass.

But the thing is, while I can get all sorts of beautiful produce and meat and dairy here -- straight from the farm, as fresh and pure as one could want -- it's really hard to find great bread within reasonable driving distance from my house.

So I have persisted. And mostly failed. HOWEVER, this past week I finally took the plunge and tried Jim Lahey's recipe for no-knead bread, made famous when Mark Bittman posted it in the New York Times some years back. Lahey's recipe is bizarre for anyone used to making bread the old-fashioned way: you mix the ingredients in a bowl for no more than a minute, you use only 1/4 tsp yeast, and then you let the dough rise for a tremendously long time -- 12 to 18 hours, even more if you keep it in a cool place. Then you shape it, let it rise again, and bake it in a covered pot. (A Le Creuset is perfect, but you can use a cast iron pot or a Pyrex, too.) And voilá -- at the end, you are blessed with the most photogenic, chewy, complexly-flavored, airy loaf you've ever seen.

The recipe works precisely because of the dough's wetness: instead of using the mechanical process of kneading to develop the gluten, the recipe relies on the water content to allow the gluten to sort of organize itself in the dough. Cooking it in a covered pot means all that water creates a steam-oven situation, which is what professional bakers rely on to get the crisp crust on proper rustic loaves.

It doesn't seem like it should work, but it does -- and it seriously takes only about 5 or 6 minutes of actual working time. 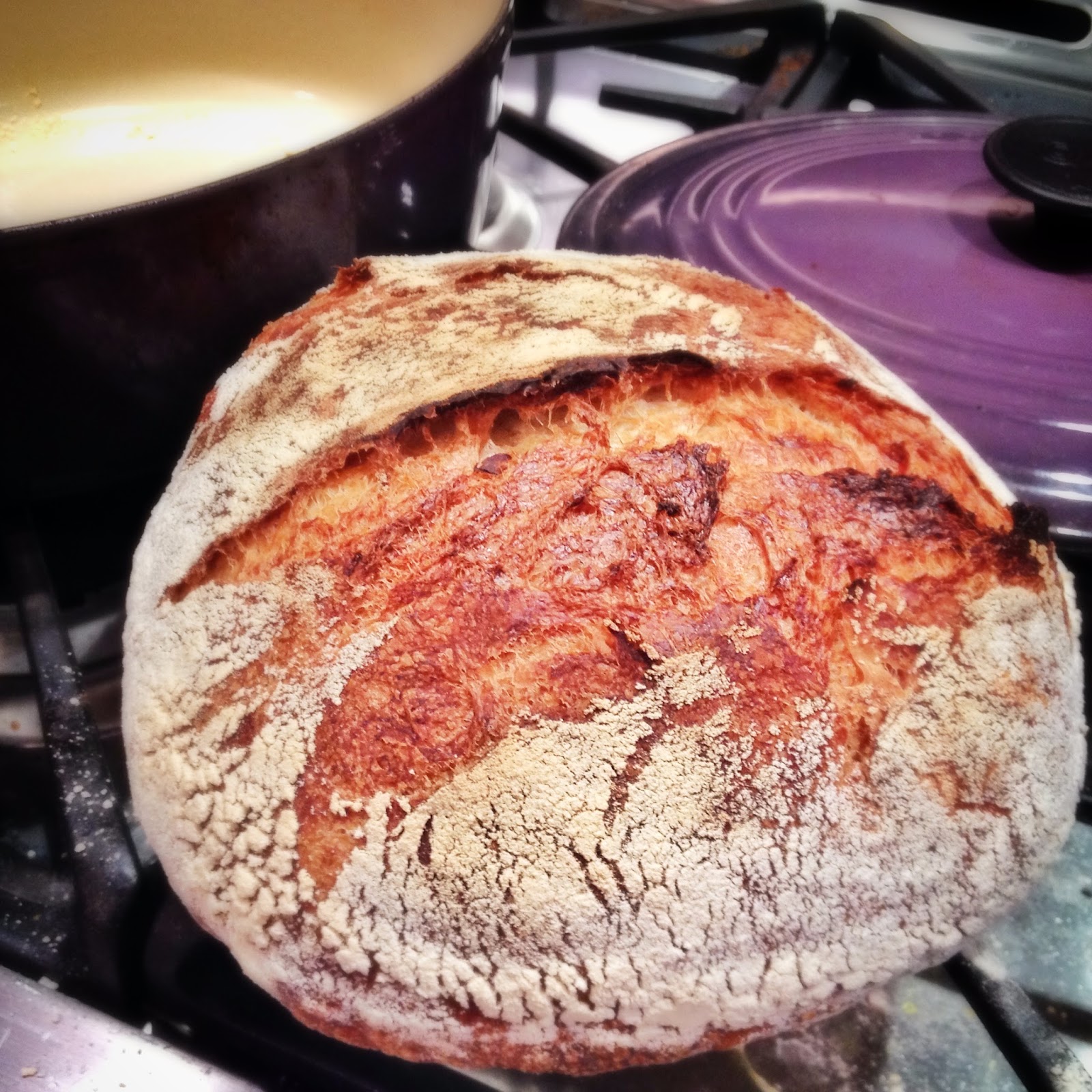 The recipe is Lahey's, with my notes added in italics. UPDATE: I have also made this successfully with whole-wheat white flour (King Arthur brand), which is a fine-milled 100% whole grain flour. The loaf comes out denser, with less loft and chew (inevitable with whole wheat because of the gluten content), but with a lovely texture and complex flavor. EVEN MORE RECENT UPDATE: I've made a few small adjustments to the recipe based on having made it again recently.

1. Mix all of the dry ingredients in a medium bowl. Add water and incorporate by hand or with a wooden spoon or spatula for 30 seconds to 1 minute. Lightly coat the inside of a second medium bowl with olive oil and place the dough in the bowl. Cover the bowl with plastic wrap and let the dough rest 12 hours at room temperature (approx. 65-72°F). The first time I made this, I left the bowl out at cool room temperature, probably around 65 degrees, for 18 or 20 hours. The second time, I left it in the oven with the light on for about 12-13 hours. Longer rising times improve the flavor of this bread, so don't be afraid to go longer than the 12 if your kitchen is cool. What you're looking for is a dough that looks like it's active and alive, with lots of bubbles and air holes on the surface.

2. Remove the dough from the bowl and fold once or twice. Let the dough rest 15 minutes in the bowl or on the flour-dusted work surface. Next, shape the dough into ball. To do this, sort of stretch and pinch it at the bottom, to create a taut dome. Generously coat a cotton towel (not terrycloth!) with flour, wheat bran, or cornmeal; place the dough seam side down on the towel and dust with flour. Cover the dough with a cotton towel and let rise 1-2 hours at room temperature, until more than doubled in size. UPDATE: In my most recent experiment, instead of placing it on a flour-coated towel, I put it on a large piece of parchment paper; using the parchment paper, lift the dough and place it in a bowl so it holds a shape as it rises.

3. Preheat oven to 450°F. Place the pot in the oven at least 30 minutes prior to baking to preheat. Once the dough has more than doubled in volume, remove the pot from the oven and place the dough in the pot seam side up. Do this by lifting the towel and flipping the loaf into the pot. Don't worry if it sort of flops in -- it will recover and become beautiful. UPDATE: If you've use parchment paper, just lift the dough out using the parchment (i.e. gather the corners so it acts like a sling). Put it in the pot, and with a sharp knife cut a couple of slashes in the top of the loaf. Cover with the lid and bake 30 minutes Then remove the lid and bake 15-30 minutes uncovered, until the loaf is nicely browned.

4. Remove pot from oven and remove bread from pot. If you can resist, let the bread cool completely before cutting it.