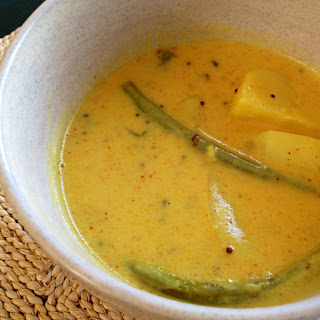 The New York Times recently wrote about a new taste for sour foods that's emerging in US food culture, driven in part by new cuisines that have caught peoples' attention, a sense that sourness is a component of good health, and a backlash at "mainstream" or "suburban" American food tastes that err on the side of sweet.

The food of my mother's community, the Sindhis, is particularly tilted towards the sour (katta) side of the taste spectrum (as well as a good dose of bitter, which seems quite out of sync with the American palate). This morning, when she opened the container of plain yogurt in the fridge and complained that it was way too tart, she decided to make a kadhi (curry in the Anglicized spelling) that is familiar in India as a way to use up homemade curds (dahi) that have soured. (Indian families always have yogurt in the fridge, and eat it with almost every meal as a cooling and refreshing counterpoint to the spiciness and heaviness of the rest of the food.) The kadhi is thickened with besan (chickpea flour) to add protein.


I have never particularly enjoyed the dish in India, but my mom's version was delicious -- mildly spicy and mouth-puckeringly sour, but also really light. Perfect for a hot summer day, in part because it's really easy. I suppose it could be eaten as a mild soup, but it's great over rice. My mom put vegetables in it, but you could serve it without vegetables in it and instead slit some okra and pan fry it till crispy and serve that on top of the creamy bowlful.

1. Take about 1.5 c plain yogurt -- NOT Greek yogurt -- that's become a bit sour and place it in a large bowl. (Note: Canadian brands of yogurt are pretty sour from the get go, but that's less true of US brands. The best thing is to buy natural or organic yogurt and leave it around for a week or so in the fridge, and the yogurt will naturally sour a bit. Or you could use fresh yogurt and add a squeeze of lime juice.) Add 2 heaping TB chickpea flour (besan) and 1/2 tsp turmeric, along with 1 TB grated ginger, and up to one hot green chili (such as a Serrano) and whisk thoroughly until free of lumps and creamy and smooth.

2. In a heavy pot, heat 1 TB canola oil, 1 tsp cumin seeds, 1/2 tsp mustard seeds, a handful of curry leaves, and either a pinch of hing (asafoetida) OR 1/2 tsp fenugreek seeds over medium high heat. When the seeds pop, turn the heat to medium-low and add the yogurt mixture carefully -- it will spatter a bit. Mix thoroughly and then simmer gently until it's a beautiful sun-yellow color.

3. Now add water -- about 1 cup at a time, bringing the mixture to a boil after each addition of water -- until you've added enough water to get it to the consistency of a light cream soup. My mom added about 3.5 c in all. Let simmer for 15 minutes.

4. When the kadhi is thickened to the right point, you can add your vegetables if you'd like -- about 15 green beans, topped and tailed, and 2 peeled waxy potatoes. You can also add up to 1/2 tsp red chili powder if you would like a spicy dish. Let cook until the vegetables are soft, stirring occasionally -- about 15 minutes. (If you don't add vegetables to the dish, simply simmer for an additional 15 minutes.) Now add your salt (1 tsp) and let the flavors meld.

5. You can top it with fried okra: take about a dozen okra, slit lengthwise, shallow fried in about 1/4 in canola oil in a heavy frying pan until till crisp. Drain on paper towels and season with salt and red chili powder immediately.

Kat said…
I agree with Michelle...this does sound lovely and delicious. I need to make it! Do you think the yougurt I get at the Middle Eastern market is sour enough at the get go?
July 22, 2013 at 7:07 PM

The Invisible Flaneuse said…
I would think, Kat -- as long as it's not too strained. And of course, as long as it's live culture it will continue to sour as it goes. Make sure not to drain off the whey, though -- mix it in before you measure.

masala_mama said…
The Punjabi version (w/pakoda) is my favorite food, actually - and it's a special treat when my mom makes it with buttermilk instead of yogurt. Reminds me that I haven't made it in a long while - will have to get on that this weekend!
July 22, 2013 at 11:30 PM

The Invisible Flaneuse said…
My aunts make that version (with little besan fried dumplings, for people who don't know what pakoras are). I'm too much a fan of proper crisp unsoaked pakoras to love them dunked in kadhi. ;-)
July 23, 2013 at 12:14 AM

Kishwar said…
Aruna, your recipe came to the rescue yesterday when I couldn't find the one I always use - it turned out great! I made it with pakoras, too. And made extra for the purists who like them crispy. Good luck with the book, its going to be fantastic!
August 2, 2014 at 10:11 AM